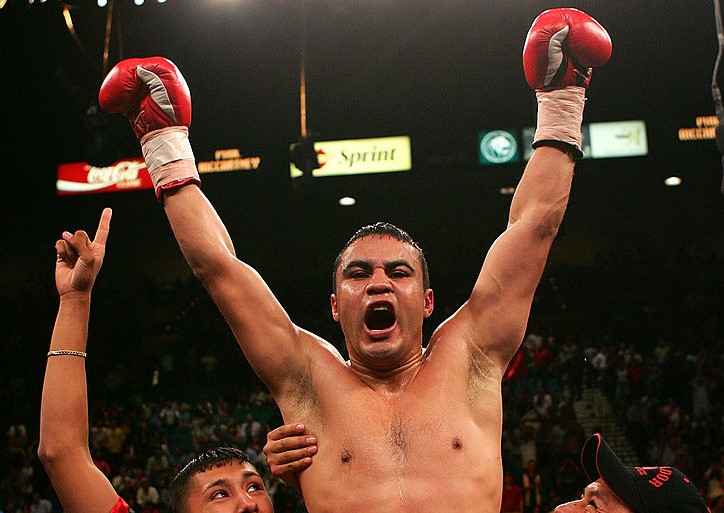 Chavez was born in Parral, Chihuahua in Mexico on November 12, 1972.

“I really enjoyed it,” Chavez told The Ring of his early years. “I was there until I was five, then we emigrated to Chicago because my father wanted a better life for his family. Luckily, he landed a pretty good job.

“It was a big adjustment for me and my sister, going to a bilingual school. We didn’t have much of anything else other than that.”

When he was nine years old, Chavez’s life changed again.

“My mother gave birth to my youngest sibling, Jimmy, and she had heart complications,” he explained. “So, my father sent me, my sister and my baby brother to live with my grandmother in Delicias, Mexico. We lived with my grandmother for two years until my mother got better and then we emigrated back to Chicago.”

While in Delicias, Chavez had taken up karate and hoped to pursue the art when he returned to The Windy City. However, his family couldn’t afford the lessons, so his father enrolled him at the local recreational park, and one afternoon, completely by chance, he came across a boxing gym.

Chavez took to the sport quickly and went on to win the Chicago CYO Golden Gloves in 1989 and 1990, under his middle names Gabriel Sandoval.

Shortly afterwards, Chavez was involved in a failed attempt to rob a grocery store and went to prison for four years.

“The robbery was a mistake,” he admitted. “It was peer pressure – big mistake on my part. During my junior year I had been accepted to go to Michigan University; I had a scholarship through boxing.”

After being released from prison, he was deported back to Mexico. After returning to the U.S. his parents sent him to Austin, Texas to live.

Chavez turned professional with a four-round win over Lewis Wood in Houston, in August 1994.

He lost his fifth fight to future world title challenger Carlos Gerena but quickly found some form and defeated the likes of Cedric Mingo and future titleholder Javier Jauregui for the NABF 126-pound title.

Chavez then stepped up in weight and stopped Louie Leija before claiming the NABF 130-pound title by besting former two-time world titleholder Louie Espinoza in May 1997.

Three defenses, including wins over long-time contender John Brown and former beltholder Troy Dorsey, left Chavez on the verge of a world title opportunity. However, he didn’t have a green card and found himself deported to Mexico for the next two years.

In early 2001, Chavez received his visa and returned to the States where he continued his career. He won three fights and then, as mandatory challenger, faced Floyd Mayweather Jr. in November 2001.

“There was a possibility that the fight might get postponed because of 9/11,” Chavez recalled. “It was going to be the fight of my career; a make-or-break fight. Unfortunately, I got the rug pulled from under me. My corner stopped the fight [at the end of the ninth round]. I think I was doing very well in the fight. It was the opportunity of a lifetime, and I’d never have abandoned the fight in that manner. Floyd was very special.”

Chavez returned with four wins, including a rematch victory over Gerena, to set up a second world title shot. This time he met Sirimongkol Singmanassuk, who had won the WBC title after Mayweather vacated. The two met in Austin in August 2003.

In his first defense, Chavez was matched with Erik Morales, who was seeking to become a three-weight world titleholder. The snake-bitten Chavez rocked Morales in the second round but injured his rotator cuff in the same session and was severely hampered for the remainder of the contest.

“I performed at the highest level with one hand,” Chavez said of the unanimous decision loss. “Erik Morales was fighting a one-handed opponent for 10 rounds. I also tore my left ACL (anterior cruciate ligament) while I was fighting Morales.”

After 15 months on the sidelines, Chavez returned against former titleholder Carlos Hernandez in a crossroads fight. He was able to edge his rival by 12-round split decision.

That win helped secure him a fight up at lightweight against IBF beltholder Leavander Johnson in September 2005. It was a moment of triumph that quickly turned to tragedy.

“I think I fought the fight of my life,” said Chavez of the 11th-round stoppage win. “I was very happy with my performance.

“I think that took a big toll on my career, I lost something in that fight. I lost that mean streak that boxers usually have when they come into a fight. I didn’t have it in me to try to hurt somebody [after that].”

Chavez didn’t fight for 17 months for myriad reasons but would meet Julio Diaz in February 2007. The injuries now mounting, he tore his right knee ligaments and subsequently lost his title in three rounds.

Following another lay off, Chavez returned with two wins but suffered losses to Michael Katsidis and former titlists David Diaz, Humberto Soto and Jorge Linares. After the Linares defeat, Chavez decided to step away from life as an active fighter.

Chavez, now 48, lives in Dallas. He works a day job in construction and spends his weekends training people how to box.

BEST JAB
Lewis Wood: He had a pretty assertive jab, something that [I learned to use] for the rest of my career.

BEST DEFENSE
Floyd Mayweather: He was very hard to hit. I tried to get as many clean punches as I could. On a scale of 1-10, I would say he was 9.5 or 10 defensively.

BEST HANDSPEED
Mayweather: You see the punch getting closer and closer until you get hit. You can’t avoid the speed. A lot of the time you see it coming, other times you just got hit with it.

BEST FOOTWORK
Mayweather: Part of the defense is a lot of footwork and how you position your feet to avoid punches.

SMARTEST
Mayweather: Louie Leija was a pretty smart guy, but he wasn’t as smart as Floyd. It was a tug of war right up until the ninth round. He was trying to avoid punches and I was trying to get them in. He was smart, it was like a chess game.

STRONGEST
Javier Jauregui: Without a doubt. He had me thinking the whole fight – very strong. I had to adapt and learn to roll with the punches. I brought the fight, that was my style, but I felt he was physically stronger than I was, so I had to adapt and be a little bit more agile; move side-to-side and work my angles.

BEST PUNCHER
David Diaz: Louie Leija and Javier Jauregui were very strong punchers. Erik Morales was tolerable; there were other fighters that were harder punchers. Floyd’s power was respectable, I think it was more his speed that was getting to me than his power. I suffered an injury against Julio [Diaz] but David Diaz, we went the distance, and he was the biggest puncher I faced in my career. It was a very stinging feeling after I got hit. I could feel the welt coming wherever he hit me.

BEST CHIN
Juan Jose Arias: He was tough as nails, I hit him with everything but the kitchen sink and he wouldn’t go down. We fought 12 hard rounds for the NABF title. [Erik] Morales’ chin was respectable, I hit him with some very hard punches in the early rounds, but I couldn’t use my arm from the second round on. The injury happened so early, so it’s difficult to pick him because I was fighting with one arm from the second round on.

BEST BOXING SKILLS
Mayweather: Good footwork, handspeed, waist movement, bobbing and weaving punches, good feints, a pretty slick boxer, pretty assertive with his punches, and the power was there at 130. It’s a lot different at 147 pounds. I felt the difference.

BEST OVERALL
Mayweather: He retired undefeated as a professional. He was pound-for-pound one of the best fighters in the world. He won world titles in five weight classes.