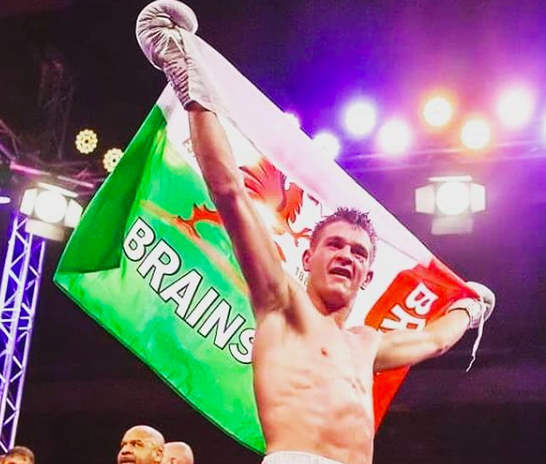 Gwynne started fast on the MTK Global/Lee Eaton event and tried to rough McComb up from the opening bell. While the classier work came from the Irishman, Gwynne wouldn’t be denied and cut McComb in each of the first two rounds.

The battle-hardened Welshman pressured McComb constantly and hurt him with a bodyshot in the second. The action-packed fight was a war of attrition. 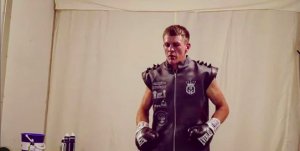 Gwynne bounced back from a loss to James Tennyson in his last outing.

McComb started to struggle with the pace and was hurt late in the sixth round. Finally, after a last hurrah midway through the seventh round, McComb wilted under the pressure and turned his back, leaving referee Steve Gray to stop the fight at 2:09 of the round.

“I put so much into this camp, you could see I was super fit,” a proud Gwynne told Alex Steedman in the post-fight interview. “No one was going to beat me; you could have put any world class fighter in there tonight and I wasn’t going to stop.

“That was only first gear, [trainer] Tony [Borg] said, ‘Don’t go up a gear. Wait till he starts tiring.’ I didn’t have to in the end.

“I knew I couldn’t stay on the back foot with him, he was a class amateur, I couldn’t outbox him, I had to take it to him and take him out of his stride. Get him cut up, I knew that was going to play on him and then I started going to work and putting my shots together.

“I’m speechless, I can’t put into words what this means to me.”

Samuel Antwi (13-1, 6 KOs) scored the best win of his career when he stopped Darren Tetley (20-2, 9 KOs) in six rounds to claim the vacant English welterweight title. 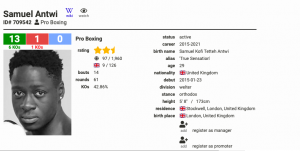 Antwi dropped Tetley in the opening round. Tetley rose but struggled to cope with Antwi’s body attack throughout. Antwi landed a sickening bodyshot with 45 seconds left in the sixth round that visibly hurt Tetley. He tried to cover up but ended up taking a barrage of headshots that dropped him. Again, he made his way to his feet. Antwi landed a big right hand which rocked Tetley and referee Michael Alexander stopped the action late in the sixth.

Highly regarded Irish welterweight Paddy Donovan (6-0, 4 KOs) continued his development when he forced usually durable Siar Ozgul (15-6, 3 KOs) to retire at the end of the fourth round.