Otto Wallin fights Dominic Breazeale Saturday, seeks to be boss in the ring 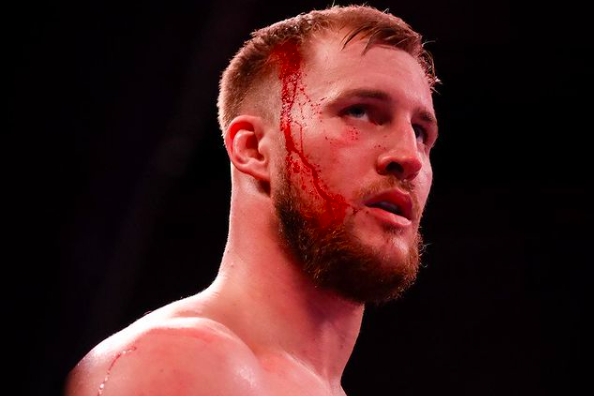 The last time heavyweight Otto Wallin gloved up, it was Aug. 15, 2020, and he clashed with Travis Kauffman at Mohegan Sun Casino in a scrap which ran on Showtime.

Because of the pandemic, “Bubble” rules were in effect, so no family, or friends or fans traveled to see Wallin do his thing. “I wasn’t as excited as normal,” the boxer told me in a Tuesday phoner. “It felt like a sparring session.” Nevertheless, Wallin knuckled down, shrugged off the strangeness, and came away with a TKO5 win.

That means he’s used to the feeling of fighting in a church, or whatever you want to compare the experience of boxing in a closed-off atmosphere. On Saturday, it’s back to the bubble for Wallin as he takes on vet Domnic Breazeale on the Showtime undercard for the event topped by the return of the talented but troubled Adrien Broner.

The boxer promoted by Salita Promotions, and co-managed by Zach Levin and David Berlin, met the charismatic Traveler Sept. 14, 2019, in Las Vegas. Many expected this to be easy work for Fury, who had drawn with Deontay Wilder, and was in between “big bouts.” Fury disposed of Tom Schwartz with ease but anyone who lumped in the Swede with Schwartz was mistaken.

Don Trella had it 116-112, and while the other two judges saw a wider fight, 118-110 from Tim Cheatham, 117-111 from Eric Cheek, eyes got opened when Wallin gave a more than solid account of himself on the Top Rank card.

In 2017, Otto Wallin moved to New York City, to plant his flag, and make a hard run at prominence. He is tutored by Joey Gamache, the Maine native who compiled a 55-4 record as a pro and won titles at 130, 135, and 140. “It was tough at the beginning,” Otto admitted. “I live in New York City, a block from Madison Square Garden, and by the way I’m hoping to fight there one day. I’ve got a great girlfriend now, great friends. I’m happy, I’m here to stay.”

Wallin battled off an early case of COVID, and then got that Kauffman win. He got his strength back, then right back into  work mode, he told me, and kept on honing the craft.

The fighter and the trainer used the great outdoors as their gym during peak COVID.

It had been almost a year since his last fight, and so, looking forward, he’s hoping to get more fights. “It was important to get a fight in the pandemic atmosphere,” he said. “You can take stuff from every fight. This one was different because there was no crowd.

He said he agreed with Josh Warrington, who spoke extensively to Tris Dixon about how he missed the fans in the arena yelling and giving him fuel to fight. “But I’m more excited for this fight. I feel like Breazeale is a good name, a good challenge, and beating him would be good for me. To put my name out there and up there more. And with no fans there, there’s no excuses, none will be valid. I will make sure to make the most of the opportunity.”

Otto Wallin is a calm and measured sort, and he sees the sport as a cerebral challenge. He doesn’t come off as a cocky in the slightest when I ask him his degree of certainty that he’ll defeat the 20-2 Breazeale.

“There are no guarantees, in the heavyweight division one punch can change it all,” he said. “But I wouldn’t be in this fight if I wasn’t confident I could win. We offered him the fight, I’ve seen him fight before, we know who he is. He’s been out almost two years since losing to Deontay Wilder (on May 18, 2019). I’m not over confident, I’m not under confident. He’s big, strong, has some nice knockouts. But I feel like I’m faster, with better hand speed, smarter, better offense and better defense. I think I’m more well rounded than he is.”

Co-manager Levin chimed in with his take on what makes Wallin a player in the division and what we can expect to see Saturday.

“Otto’s head trainer Joey Gamache likes to say of him: ‘He’s a big man with little man skills.’ It means that Otto has the sound fundamentals, versatility, and talent to do a bit of everything in the ring, something you don’t see too often among heavyweights,” Levin said. “I think we will see that fighter on February 20th. People recognize his skills and ability. I wonder if it obscures the fact that he’s a predator. His punches come from odd angles. They’re also well-placed and accurate.The 47 stitches to Fury’s eye from a left hook he didn’t see coming was not an accident. Nor was the overhand left that badly staggered Fury in the 12th. His southpaw jab and body work is an issue for any opponent he faces, as is his footwork, defense, pace, and speed. His greatest assets are not physical. They are his mind, his character, his habits. When people ask him how ‘camp is going,’ he struggles to answer. There is no ‘camp’ for him. His grind is constant. He takes a week off after a fight and then he’s back at it again. He is “All In” Wallin. His handle fits not just because it rhymes. His dedication to his craft is inspiring. ” 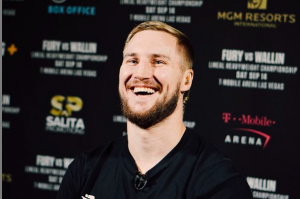 Otto Wallin is getting close to making it into the RING top ten, among heavyweights.

I asked Otto Wallin if he sees enough similarities in Kauffman and Breazeale that he can employ a similar strategy for both bouts. “Breazeale is kind of a plodder, but the difference is in the size. (Breazeale is 6-7, 240 pounds while Kauffman is 6-3, 235). Kauffman was a solid guy, he went into round ten with Luis Ortiz. But I think Breazeale is a little better. The thing with Breazeale is, we know he’s aggressive, so we can’t just box him. I gotta earn his respect. I want to keep a certain state of mind, be the boss in there.”

Wallin shares that camp has been solid, and that he still jells nicely with Gamache, who came on radars as a trainer as he started working with Teofimo Lopez Jr as backup to Teofimo Lopez Sr.

Otto Wallin looks to me like he’s headed into his physical and mental prime. What does he see in this division, and where he fits in there? “I hope they make the Tyson Fury-Anthony Joshua fight,” he said. “It’s good for boxing, and the division, if we can get one champ that would be great. Fury and Joshua are I think the two best, and while I think Joshua is very good, Fury has more momentum, he’s big, and awkward, and he’s more confident. Fury is safe in himself, he knows what works. I think he’s the favorite in that fight. I think there will be opportunities coming out of that one, one of the titles becoming available. I’m not looking past Breazeale, I gotta keep winning, working, improving myself and positioning myself for a title shot. I’d like to fight at least three times this year…and if I beat Breazeale then good fights are there to be made. It’s most important to be busy, get at least two more this year. That should bring my name up there to fight for a title.”

The momentum favors Otto Wallin coming in to the Saturday match. Breazeale is 36, has been stopped by Anthony Joshua and then Wilder, in the first round of their bout. It wouldn’t surprise me if he hung up the mitts if Wallin stopped him, too.