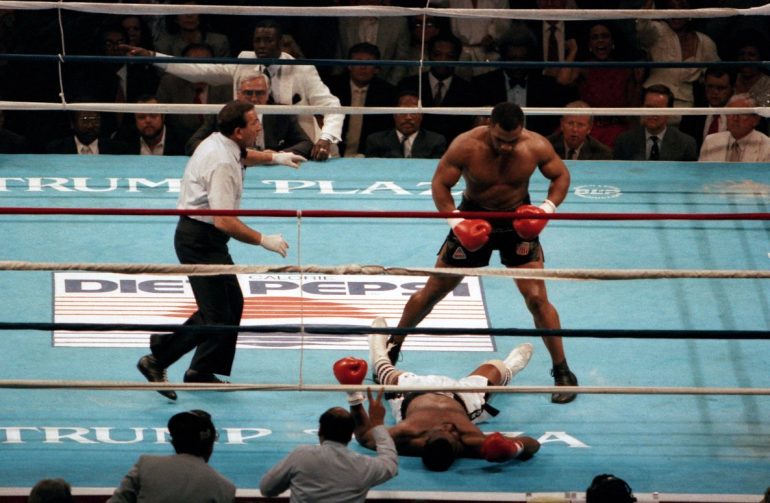 Tyson blasts out Spinks at The Trump Plaza. Photo from The Ring archive
17
Feb
by Bernard Fernandez

Atlantic City’s Boardwalk Hall, constructed in 1929 at a cost of $15 million and renovated over a 3½-year period (at a cost of $90 million) ending in 2002, hasn’t housed a major boxing event in six-plus years. But the grand old architectural dame of a once-bustling New Jersey seashore town, its usage however reduced, at least is spared demolition in the foreseeable future, the result of it being designated a National Historic Landmark in 1987.

Such is not the fate of Boardwalk Hall’s adjacent structure, Trump Plaza Hotel and Casino, a 39-story, 906-room gambling palace that opened with much fanfare on May 15, 1984. Shuttered on September 16, 2014, after several years of benign neglect that accelerated into unsalvageable deterioration, its legacy as a onetime magnet for megafights might remain intact for a while, but the once-glitzy building is about to become a mountain of rubble.  At 9 a.m. Eastern Standard Time on Wednesday, a button will be pushed and Trump Plaza, packed with strategically placed explosives, will collapse upon itself in a matter of moments.

The implosion had been scheduled for January 29 but was pushed back due to safety concerns uncovered by workers preparing its destruction.

“This has been a tedious process working with all the professionals,” Atlantic City Mayor Marty Small Sr. said. “We’re working to get this building down as safely as possible. The need for demolition was expedited last year when Trump Plaza was declared a public health hazard after debris from its façade flew off the building during heavy winds.

Former President Donald Trump, whose surname was plastered on nearly every large, flat surface of his three casino properties in better times, will not be present to observe the demise of his onetime pride and joy, and the first of his three Atlantic City casino properties. The former Trump Marina, which closed in 2011, has since become the Golden Nugget, and the Trump Taj Mahal, closed in 2016, reopened on June 27, 2018, as the Hard Rock Hotel and Casino. But Trump has absented himself from Atlantic City for more than 10 years now; by 2009 he had lost control of all but 10 percent of his interest in Trump Entertainment Resorts, and he later sued to have his name removed from the buildings.

Given his higher-than-ever public profile and source of raging national discussion that extends from the halls of Congress to most American voters, Trump is regarded either with unrelenting scorn or fond remembrance by those prone to be firmly on one side or another.

“You know, to me, it’s just like ridding the city of part of the Trump stench,” attorney Stephen Dicht, who is active in local Democratic politics, told The Philadelphia Inquirer of the scheduled implosion. “He did so much wrong in Atlantic City, and then he left that disgusting building there, which is the first people see coming in off the expressway. I just wish he would go away like the building would go away.” 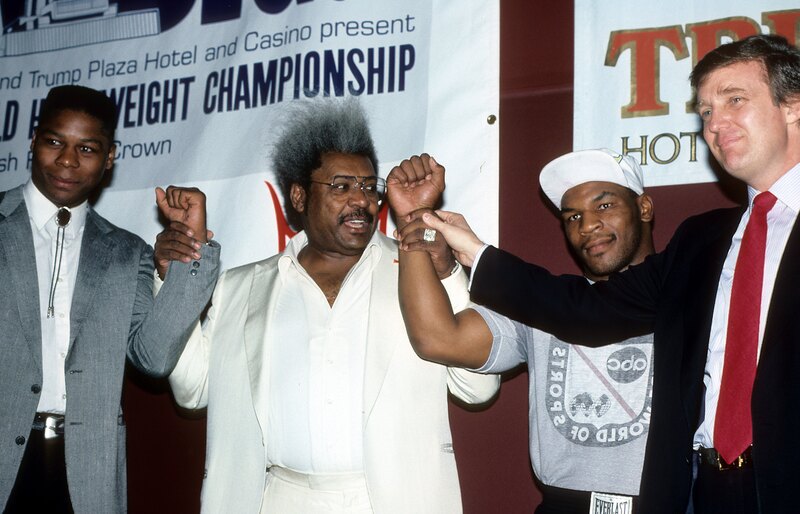 But it wasn’t and still isn’t easy separating Trump the politician from Trump the financier and deep-pocketed fight fan. The latter so elevated his Atlantic City boxing operation that city fathers dared to call their town the “boxing capital of the world,” a claim that was a far easier sell with Mike Tyson, the dynamic young knockout artist that Trump and his advisers had identified as the mega-attraction who would bring thousands of free-spending visitors to Trump Plaza, under whose auspices Trump would ply his brutal trade. Iron Mike would enter the ring at Boardwalk Hall five times as a standard-bearer for the Trump brand, as guaranteed an attraction in his realm as, say, Michael Jordan was in basketball or Tiger Woods in golf.

“It became very competitive between us and Vegas, maybe even a little contentious,” Larry Hazzard Sr., the chairman of the New Jersey State Athletic Control Board, told me for a story I wrote for the Philadelphia Daily News in December 2009. “But we had the edge because we had Tyson.”

Among the blockbuster fights staged in Boardwalk Hall bearing the Trump Plaza imprimatur were Tyson-Larry Holmes and Evander Holyfield-George Foreman, which was staged on April 19, 1991. Just three months after that fight, Trump filed for Chapter 11 bankruptcy. He later filed for Chapter 11 three more times under variations of his corporate domain, in 1992, 2004 and 2009. 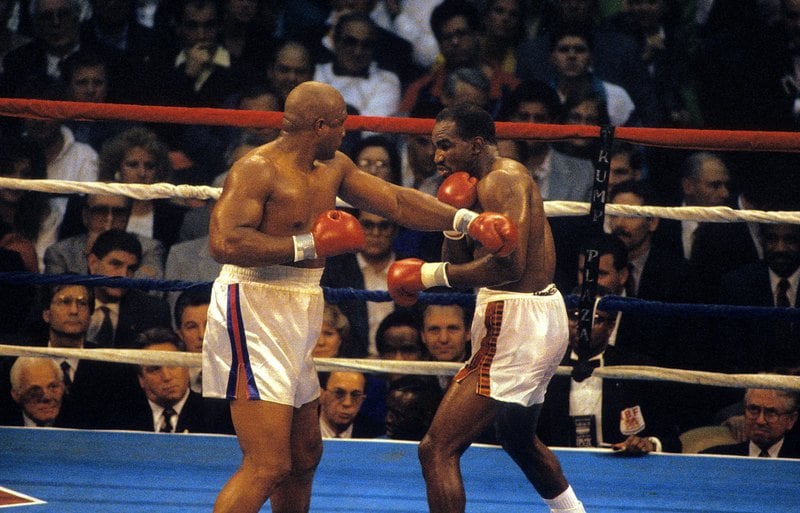 Evander Holyfield and George Foreman also threw down at Trump Plaza. Photo from The Ring archive

Can blame for the downturn of Trump’s Atlantic City fortunes, and that of the city, be laid principally at the now-former president’s feet? Was it simply a shifting economic climate that would have occurred whether or not he had overextended himself? As is always the case with any rags-to-riches or riches-to-rags tale, it depends on whom you ask.

“Atlantic City didn’t fall off the boxing map all at once,” Bernie Dillon, an executive with the Trump organization during its halcyon period, told me in 2009. “The scaling back was kind of a gradual thing. But, you know, that’s how it is just about everywhere these days.”

What is beyond dispute is that the zenith of Trump Plaza’s importance to boxing, and to Atlantic City, came the night of June 27, 1988, when Tyson – holder of all governing body heavyweight titles — blasted out lineal and Ring Magazine champ Michael Spinks just 91 seconds into the first round before a record crowd of 21,785 in Boardwalk Hall. Trump snagged that fight by outbidding Vegas with a then-record $11 million site fee, which he more than made up with a $13 million live gate, millions of dollars in Trump Plaza casino drop and still millions of dollars more of free publicity leading up to fight night.

“It was the biggest event in the world at that time – not just in that country or in boxing,” Spinks’ manager, Butch Lewis, who passed away in 2011, told me. “I’m talking ‘bout the entire f—— world. If there was a Superdome in Atlantic City, we could have filled that sucker up twice over.”

But there is something every mountain climber understands. Sure, there is exhilaration when you scale the summit, but the only place to go after that is down, and there’s always the risk of losing your footing and falling off a cliff.

Trump noted that while boxing could be and was for a time a very profitable part of his A.C. empire, it was also a lot of fun. “I put on these fights because I’m a fan,” he once said. “I do it because I like it. It’s exciting. People really react to it. You couldn’t see this kind of excitement at the opera or ballet.”

There are those who insist that much of the fun ceased to exist for Trump when three of his high-level executives involved with boxing – Stephen Hyde, Mark Grossinger Etess and Jonathan Benanav – were among five persons killed in the crash of a company helicopter on October 16, 1989, in the pine woodlands near Forked River, N.J. Of Etess and Hyde especially, Trump once observed that “Those two guys are my experts. With them, I don’t need anybody else.”

Without his primary sounding boards, Trump scaled back his immersion in boxing to such a degree that it had a trickle-down effect on other casinos. Something called the “Casino Coalition” was formed, whereby all the city’s casino-hotels would pool their resources, buying blocks of tickets to be distributed among their high-rollers, to bring more big fights to Boardwalk Hall. But as Trump Plaza was the closest casino to where such fights would be held, it was determined by the decision-makers for other casinos that Trump Plaza’s tables would lure a fair share of their preferred guests on the basis of proximity. The alliance soon collapsed, in large part because of resentment by non-Trump casino bigwigs who didn’t like him when he was at the center of Atlantic City’s boxing boom, and liked him less when his pullback from the sport also adversely affected their properties.

Say what you want of Trump – and who doesn’t have something to say about him, one way or the other? – but he was inducted into the New Jersey Boxing Hall of Fame in 2015 and the Atlantic City Boxing Hall of Fame in 2018, and justifiably so. Like Jonas Cord Jr., the pivotal character in author Harold Robbins’ best-selling 1961 novel, The Carpetbaggers, and 1964 movie of the same name, he is a larger-than-life megalomaniac whose approach to life is to go big or go home.  He went big at boxing, and then, well, he went bigger into something else. And now he’s home again. Maybe.

Someone’s finger soon will push a button and the shell of what used to be Trump Plaza – “an opulent, wonderful place,” Dillon now wistfully says in remembering its heyday – will go down as surely and as swiftly as did Michael Spinks against Tyson’s dynamite fists. Some will cheer the end of what had become a nuisance and an eyesore, but others might shed a tear for the removal of still another iconic boxing venue.

Most buildings, and all fighters, aren’t designed to last forever. The Astrodome in Houston, called the “Eighth Wonder of the World” when it opened in 1965, still stands but is unused and decaying. Philadelphia’s Blue Horizon last was the site of a boxing card in 2010, and the Kronk Recreation Center in Detroit closed in 2006 and was largely destroyed by fire in 2017. All those places were repositories of some of our favorite images of fights and fighters, but when something is gone, it’s gone. Time has a way of scrubbing clean most vestiges of what used to be.

Tyson, for one, isn’t likely to forget what Donald Trump – who he still considers a friend – and Trump Plaza did for him. “He paid me $11 million to fight that night,” he said of his 91 seconds of glory against Spinks. “He was putting on the biggest events in boxing. Atlantic City wasn’t the way it is now. It was a booming city then.”