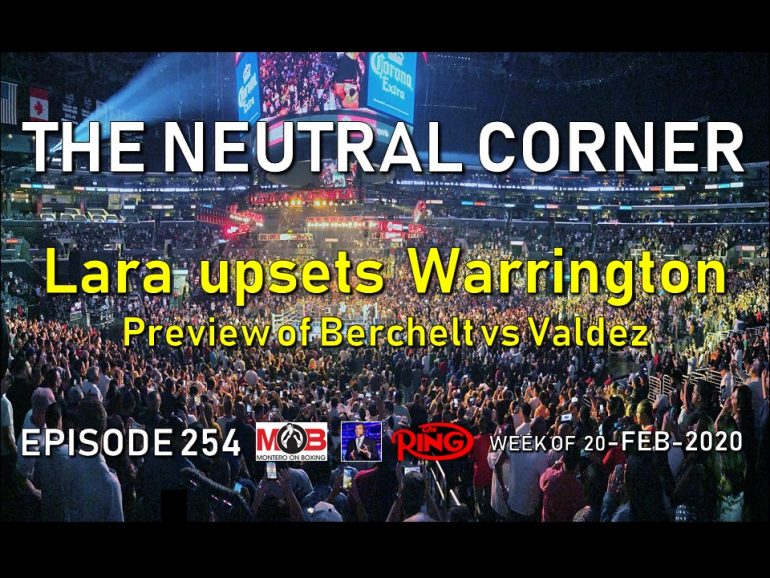 On episode 254 of The Neutral Corner boxing podcast, host Michael Montero opined on the latest news in the fight world.

It was announced last week that Canelo Promotions, created by Saul “Canelo” Alvarez, has been granted a promotional license to promote events in the state of Nevada.

This brings Alvarez one step closer to a super middleweight unification bout with Billy Joe Saunders on May 8 in Las Vegas. It’s possible that fight could land at the brand new Allegiant Stadium, home of the NFL’s Las Vegas Raiders.

But first, Canelo must take care of mandatory challenger Avni Yildirim on February 27 in Miami. Alvarez is a heavy betting favorite against the Turkish fighter.

There were three major cards around the world on Saturday, February 13.

In London, Mauricio Lara scored the upset of the year to date, stopping former featherweight titleholder Josh Warrington in the ninth round of their non-title bout. Fighting outside his native Mexico for only the second time, Lara dropped Warrington twice before referee Howard Foster intervened. Many observers felt the bout could have been stopped earlier.

In Las Vegas, top lightweight contender Richard Commey scored a KO 6 win over Jackson Marinez. In the co-main, American heavyweight prospect Jared Anderson improved to 8-0 (8 knockouts), also winning via knockout in the sixth round. A light heavyweight title fight between Joe Smith Jr. and Maxim Vlasov was set to be the main event but was postponed due to Vlasov testing positive for COVID-19.

In California, former junior lightweight titleholder Joseph Diaz Jr. lost his title on the scales, coming in 3.6 pounds over the division limit. After an entertaining scrap full of ebbs and flows, Diaz settled for a majority draw against Russian Shavkatdzhon Rakhimov.

Midwest Ceylon had some jokes regarding Canelo Alvarez getting his promoter’s license in Nevada. “He learned a lot more from Floyd Mayweather other than how to get embarrassed in a one-on-one fight,” he said. “I don’t see what the big deal is with Nevada granting him a promoter’s license, I got a marriage license in Las Vegas three, no actually four times.”

JB from Tampa disagrees with Montero’s prediction for the Kelly vs Avanesyan fight this Saturday. “Let’s go back to 2019 when Kelly fought Ray Robinson,” he said. “He got a draw against that guy, Robinson should have won. Then he beat Wiston Campos but he didn’t impress. Then I compare that to Avanesyan. I know he lost to Kavaliauskas (in 2018), but he went six rounds and that guy is a pretty solid fighter. And he beat Shane Mosley. Based on that, I’m going to go with Avanesyan.”

Sebastian from El Paso is annoyed with some of the commentators in UFC and boxing alike. He feels they too often exaggerate the accomplishments of young, largely untested fighters. “It’s just frustrating,” he said. “I think that’s part of the reason we got so many fans respecting the “0” more than the resume these days.”

Mark from Ireland wants to know what’s next for Joseph Diaz Jr. “I believe that Rakhimov is being ordered by the IBF to fight Kenichi Ogawa for their vacant junior lightweight title since Diaz was stripped,” he said. “I’ve heard that Tugstsogt Nyambayar is going up to 130 pounds, so they could throw him in there with Diaz – that would be a good fight. And I’d love to see Emanuel Navarrete against Can Xu, that’s a war.”