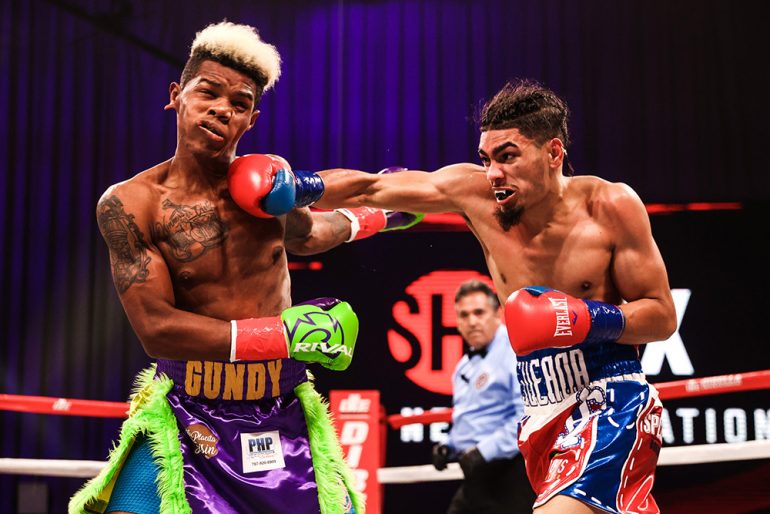 Janelson Figueroa Bocachica is getting a little used to this. This will be the second appearance for the stringy 5-foot-10, 22-year-old welterweight on Showtime’s ShoBox: The New Generation.

Figueroa has stopped three of his last four opponents, including a stunning first-round kayo over Nicklaus Flaz the last time he was on ShoBox.

A native of southwest Detroit, Michigan, Figueroa started fighting when he was eight—and comes from a boxing foundation on both sides of his family. He sparred the first time he stepped into a boxing gym.

The result: Figueroa knocked the kid out.

“I’ve been knocking out kids ever since, and that came from training at home with my dad,” said Figueroa, whose father, Nelson Figueroa, had an amateur past. “My dad used to put his hands up and that’s how I learned how to punch. I didn’t start competing in tournaments until I was nine, and I lost my first fight to a kid I thought I beat.

“Two fights later, I fought the same kid and he was crying before they rang the final bell. Even at the age of nine, that kid was the A-side and they gave that first fight to him. I knew the kid was favored to win that first fight, and I came back to beat him. He didn’t want to see me anymore.”

By the time Figueroa hit the junior Olympics, around the age of 15, he began to recognize he was good. As a teenager, he sparred with two-time IBF junior middleweight titlist Cornelius Bundrage.

Figueroa knows Reyes will be a challenge.

“I know he is undefeated; he is a hard puncher and he doesn’t come to play,” Figueroa said. “He claims to be a sharp shooter, and if he comes to sharp shoot with me, that will be amazing. That will put me on my game. All I Know is he better come ready.”

This will be Figueroa’s first 10-round fight.

“I’m ready,” Figueroa said. “I only had one fight last year because of (COVID) pandemic, but I still stayed in shape. I stayed in the private gym in a garage. It shows how much I take boxing seriously.

“I’m looking to knock this guy out. I’m here to make a statement on Mark Reyes.”