Richard Commey bounces back with sixth round knockout of Jackson Marinez 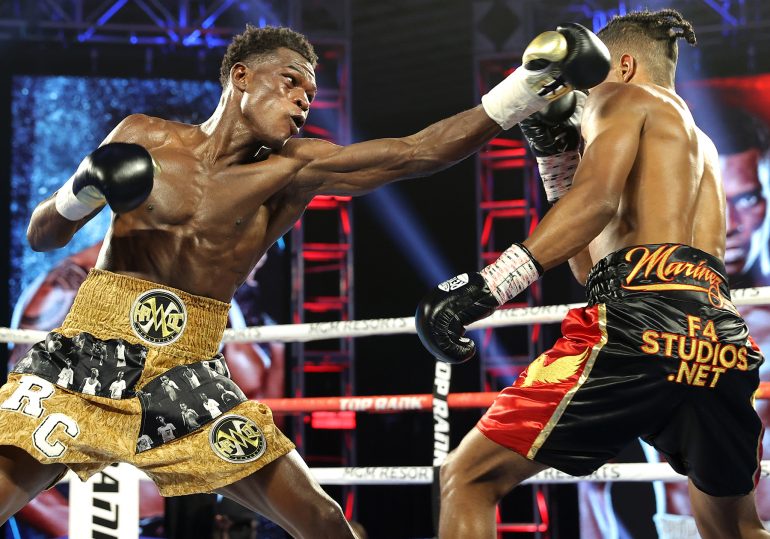 Lightweight contenders Richard Commey and Jackson Marinez, who were both coming off losses, knew they needed a win Saturday night to put themselves back into the mix in a loaded 135-pound division.

It was Commey who got the job done — and in explosive fashion — as he scored a highlight-reel sixth-round knockout to punctuate a strong performance in the main event of the Top Rank Boxing on ESPN card inside the bubble of the conference center at the MGM Grand in Las Vegas.

The fight was originally scheduled to be the co-feature, but on Thursday it was elevated to the main event when Maxim Vlasov tested positive for Covid-19 and his fight against Joe Smith Jr. for the vacant WBO light heavyweight world title was postponed.

Commey took advantage of the bigger spotlight in his first fight since he lost the IBF world title by second-round knockout to Teofimo Lopez in his second defense in December 2019.

Commey notched the win after Lopez, who was on hand for the card, came to his dressing room to offer encouragement to him before the fight and then went to his corner after the fight to congratulate him.

Commey’s key to the fight – to most of his fights – was no secret. He relies on his potent right hand and he looked for it and landed it often. It took Commey a couple of rounds to get going but by the third round he was pressuring Marinez and landing the right hand, including one in the third round that forced him into the ropes.

“I started very slow because I have been away (from the ring) for over a year,” Commey said. “So, it took me a little time just to get my rhythm, and my corner was telling me to do some things. As soon as I started getting things going you can see why I beat him.”

Commey continued to press forward and barely gave Marinez, more of a boxer than puncher, a chance to get into any kind of rhythm. Marinez’s best punch is his jab but it was entirely ineffective. According to CompuBox statistics, he landed only 13 of 102 jabs.

The Robert Garcia-trained Marinez (19-2, 7 KOs), 30, of the Dominican Republic, simply could not deal with Commey’s pressure and it looked like it would only be a matter of time until he caught Marinez with a clean right hand. Commey hurt him with one early in the sixth round and then backed him up with another strong one with about two minutes left in the round.

The 33-year-old Commey (30-3, 27 KOs), of Ghana, was relentless and finally landed a jab followed by two powerful rights that sent Marinez into the ropes and down to the mat with about 40 seconds left in the sixth. Marinez beat the count but did not look good and Commey attacked again, this time landing a huge right hand that sent Marinez literally bouncing off the ropes and down the canvas on his back. Referee Kenny Bayless gave him a quick look but did not count and waved off the fight at 2 minutes, 35 seconds.

“After 14 months out of the ring and coming off a loss he fought the perfect fight,” Keith Connolly, Commey’s co-manager, told The Ring. “He walked down Marinez and used his physical strength to wear him down, showing that he still has a lot left in the tank.”

Commey landed 60 of 294 punches (20 percent) and Marinez landed 64 of 297 (22 percent), according to CompuBox statistics. Though the stats were nearly even, Commey was very obviously the more powerful puncher.

Commey, who is trained by Andre Rozier, celebrated by break dancing in the ring and when he walked back to his corner there was Lopez on the floor reaching up to the fist bump him and congratulate him.

Commey was very appreciative of Lopez, who in the fight after beating him outpointed Vasiliy Lomachenko to win The Ring lightweight title and unify sanctioning organization belts on Oct. 17, also in the conference center at the MGM Grand.

“Aside from getting in the ring in wars you show love to one another,” Commey said of Lopez’s encouragement. “I saw him in the (hotel) lobby and we chatted and we hugged. He always liked me and it’s pure love. For him coming down to my corner just to motivate me and tell me he’s rooting for me, he showed tremendous love. That’s how it’s supposed to be. I appreciate that.”

Marinez was largely unknown until Aug. 15, when he faced Rolando Romero for a vacant interim lightweight belt on Showtime and lost a disputed unanimous decision that many thought he clearly won. Marinez hoped for an immediate rematch but when it did not materialize he took the opportunity to face Commey instead but this time suffered a bona fide defeat.

Commey’s victory should launch him into a bigger fight, especially with Lopez not long for the lightweight division. He plans to soon move up to the junior welterweight division, which would leave others to fight over the belts he will leave behind.

“Great bounce back performance from Richard tonight,” Connolly said. “Fights like Ryan Garcia and Devin Haney will be the type of fights we will be targeting next.

“With Teofimo most probably moving up to 140 after the (George) Kambosos (mandatory) fight there will be a lot of opportunity for Richard to get another title shot after tonight’s performance once some of the belts are vacated.”