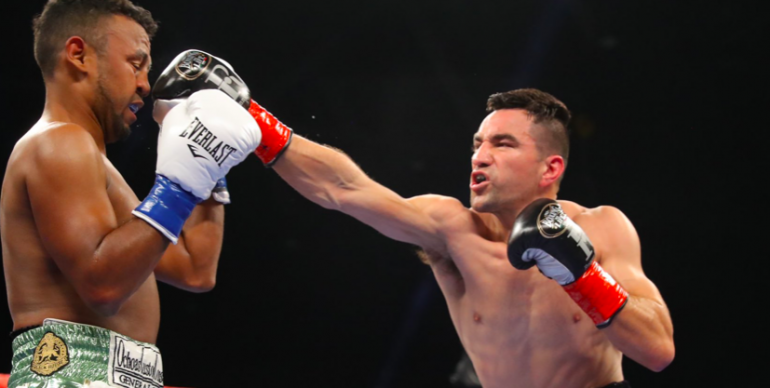 The Argentinian dominated from start to finish, beating Teixeira unanimously by the scores of 120-108, 118-109 and 117-111, taking his WBO junior middleweight title.

Could a unification match with Jermell Charlo be next?

Castano (17-0-1, 12 knockouts; below, left, looking to place the right hand on Teixiera) started strong, applying pressure on the taller, longer Teixeira from the opening bell. Facing a sizable height and reach disadvantage, the Argentinian pressed the action throughout. He appeared to be in terrific shape tonight. 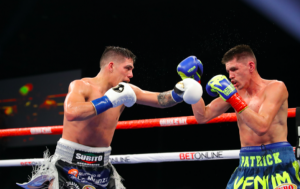 Although outgunned, Teixeira did everything he possibly could. The Brazilian southpaw tried to keep things in the center of the ring where he could use his reach. Although he had some moments in the later rounds of the fight, Teixeira just couldn’t keep Castano off of him.

Halfway through the twelfth and final round, Castano hurt Teixeira with a body shot followed by a barrage of punches. It appeared for a moment that Castano might get the stoppage, but Teixeira hung tough and made it to the final bell. The scorecards were a mere formality.

This was a career-best performance by Castano. The only blemish on his record was a split draw with Erislandy Lara in 2019. He looked like an improved fighter tonight against Teixeira. A fight with unified champion Jermell Charlo (WBC, WBA, IBF) would be a fantastic match up, perhaps the best fight that could be made in the junior middleweight division.

Teixeira (below) falls to 31-2 (22 KOs). Prior to tonight, his lone defeat was a TKO loss against Curtis Stevens on the Canelo-Khan undercard on May 7, 2016. 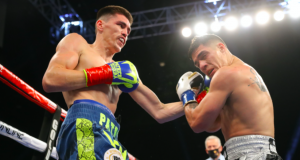 Teixeira finds a home for the left in this pic taken by Tom Hogan.

He had gone 5-0 since, including a win over Carlos Adames in 2019 to claim the interim WBO title.

This fight was the co-main on the Joseph Diaz vs Shavkatdzhon Rakhimov card at Fantasy Springs Casino in Indio, California, and shown live on DAZN.

Rios Goes To 33-3 But Grades Self Harshly

Ronny Rios made it look easy tonight, outboxing Oscar Negrete over ten rounds at the Fantasy Springs Casino in Indio, California. The judges scored it unanimously, 99-91 and 100-90 twice, in favor of Rios, who improved to 33-3 (16 knockouts).

Despite the wide scorecards, Ronny wasn’t very impressed with his performance.

“Today I gave myself a C. I’m very hard on myself, I think I could have done a lot better. I’m not going to sugar coat it, I’m not happy with my performance tonight. I’m just trying to get better. I’m trying to get the best out of myself. I want to challenge myself.” 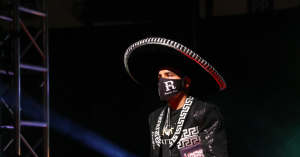 When asked about who he wants next, Rios left no mystery.

“Murodjon Akhmadaliev (the unified IBF-WBA champ and #1 RING ranked junior featherweight) is a fight I would want. We could make that happen. Whoever has a belt, it doesn’t matter at this point. I don’t go the easy route. I’ll fight whoever is considered the toughest.”

After a tough stretch in 2017-2018 where he lost 2 of 3 bouts, Rios recharged his career with an upset stoppage win over Diego De La Hoya in 2019. He is now 4-0 since his last defeat and finds himself in the mix of a red hot 122-pound division.

Meanwhile Negrete, a native of Colombia who now lives in Paramount, CA, drops to 19-3-2 (7 KOs). The “Jaguar” made fans during his terrific trilogy of bantamweight fights with Joshua Franco in 2018-2019. Perhaps a move back down in weight would be best for him. He just doesn’t appear to have the size and strength to compete at junior featherweight.

Rios vs Negrete was broadcast live on DAZN from the Fantasy Springs Casino. Both men are quite familiar with the venue, having now fought there seven times each.

Uzbekistan native Bektemir Melikuziev improved to 7-0 (6 KOs) with a third-round stoppage over Morgan Fitch. The blue-chip super middleweight prospect was scheduled to face Sergey Kovalev, but the Russian tested positive for PEDs. Rather than waiting for the next big name, “Bek the Bully” decided to stay active by fighting Fitch.

Azat Hovhannisyan scored a KO8 win over Enrique Bernache in a 10-round super bantamweight fight. Hovhannisyan improved to 19-3 (16 KOs) with the victory.

Shane Mosley Jr, son of the great Shane Mosley, beat Mexico native Cristian Olivas by stoppage. Olivas retired in his corner after the fifth round of their 10-round super middleweight bout. 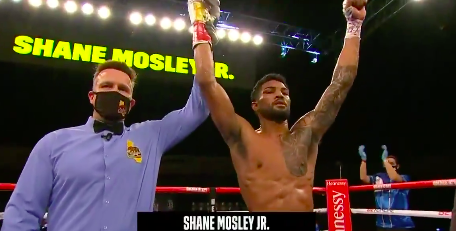 Mosley Jr got the W and is hearing chatter about a title crack.

Undefeated featherweight prospect Victor Morales Jr improved to 14-0 (7 KOs) with a unanimous decision victory over Mexican Rodrigo Guerrero in an 8-round featherweight bout.

Hawaii native Dalis Kaleiopu won his professional debut, knocking out Eduardo Sanchez in the third round of their lightweight bout.