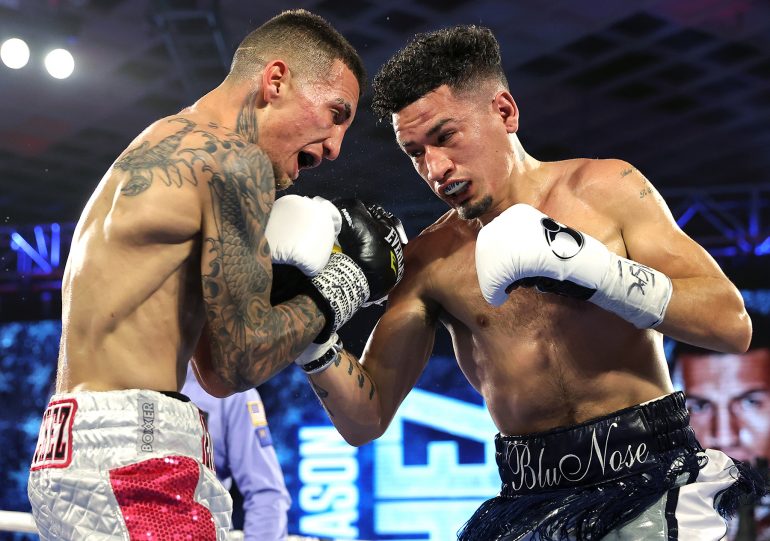 Adam Lopez (right) and Jason Sanchez go at it during their 10-round fight in February 2021. Photo by Mikey Williams/Top Rank Inc via Getty Images
13
Feb
by Dan Rafael

Adam Lopez and Jason Sanchez, both looking to make some noise in a featherweight division that does not have a clear top man, turned in an entertaining scrap that went to Lopez by majority decision on Saturday night.

Fighting in the co-feature of the Top Rank Boxing on ESPN card inside the bubble of the conference center at the MGM Grand in Las Vegas, Lopez retained his regional 126-pound belt thanks to a strong second half of the fight.

The fight was elevated to the co-feature spot when light heavyweight contender Maxim Vlasov tested positive for Covid-19 on Thursday, forcing his main event against Joe Smith Jr. for the vacant WBO world title to be postponed.

As expected they produced consistent action but it was former featherweight world title challenger Sanchez (15-3, 8 knockouts), 26, of Albuquerque, New Mexico, who got the better of it time and again through the first four rounds. He not only outfought Sanchez but also outboxed him in those rounds. In the fourth round, there was fierce exchange in the center of the ring as they each landed solid right hands.

The Buddy McGirt-trained Lopez (15-2, 6 KOs), 24, of Glendale, California, began to finally look comfortable in the fifth round and continued to figure Sanchez out in the sixth round as he found a more consistent home for his right hand. By the end of the seventh round, he had given Sanchez a bloody nose. In the eighth round he backed Sanchez up with a right uppercut and landed an assortment of other shots while also making Lopez badly miss several punches.

With the fight seemingly up for grabs going into the 10th round, Pepe Sanchez, Sanchez’s father and trainer, was frank with his son, telling him, “You’ve got to out there with everything! If you win this round we win this fight!”

Sanchez pressed forward and tried to land whatever he could while Lopez, the son of the late junior welterweight contender and 1984 Mexican Olympic silver medalist Hector Lopez, moved a lot in the 10th round but also landed a few good right hands to make his case.

“I was 100 percent confident that I had won the fight,” Lopez said. “I felt l won most of the rounds. I noticed he tried to get the momentum, and I picked it up and got back to what was working. Buddy had to snap it out of me and get me back to my game plan, and once I did, it was like butter. It was easy.”

According to CompuBox statistics, Lopez landed 106 of 369 punches (29 percent) and Sanchez, who lost a decision challenging then-featherweight world titlist Oscar Valdez in June 2019, landed 148 of 636 (23 percent).

In the opening bout of the main card, 21-year-old blue chip heavyweight prospect Jared Anderson dominated Kingsley Ibeh before scoring a thunderous one-punch knockout in the sixth round of their schedule six-rounder.

Anderson (8-0, 8 KOs), of Toledo, Ohio, had scored four first-round knockouts and had never been past the fourth round, but he wanted to fight the durable Ibeh (5-1-1, 4 KOs), 27, of Phoenix, who had never previously been stopped. Top Rank was happy to accommodate Anderson with the hope that he would get in some rounds against Ibeh, who provided them until the explosive ending.

“We worked day and night for this. While they sleep, we’re working,” Anderson said. “We will keep fighting prospects and people who say they can’t be beat. I am here to fight the best. Since everyone wants it, why not give it to them? I wanted the Ibeh fight because I saw him push many prospects. The knockout came, and I made a statement.”

Anderson took command of the fight immediately as shoved his stiff left jab down the middle and bloodied Ibeh’s nose with a hard one midway through the first round. He fought the rest of the fight with blood leaking from his nose and eventually also from his bloodied mouth.

Anderson relied on his hard jab throughout the fight while looking for a spot to unleash his right hand. He never landed the big right, but his jab was good enough to keep Ibeh backing up and landing very little in return other than the occasional wild shot. And then in the sixth round Anderson ended the fight with a short right hand followed by a punishing left hook on the chin that knocked Ibeh out cold before he hit the mat flat on his back. Referee Russell Mora did not both to count, immediately waving off the fight at 2 minutes, 19 seconds while Ibeh received medical attention. Ibeh was sent to the hospital as a precaution.

Anderson outlanded Ibeh 121-18 in total punches, including 63-6 in jabs, according to CompuBox.

Ibeh was coming off a surprising majority six-round draw with another Top Rank prospect in 2016 Italian Olympian Guido Vianello this past October on the undercard of the 2020 fight of the year between Jose Zepeda and Ivan Baranchyk and was looking to add a blemish to another prospect in Anderson.

Middleweight Troy Isley (1-0, 0 KOs), a 22-year-old former amateur standout from Alexandria, Virginia, made his professional debut and rolled to a shutout decision against Bryant Costello (1-2, 1 KO), 34, of Monticello, New York. He won 40-36 on all three scorecards. 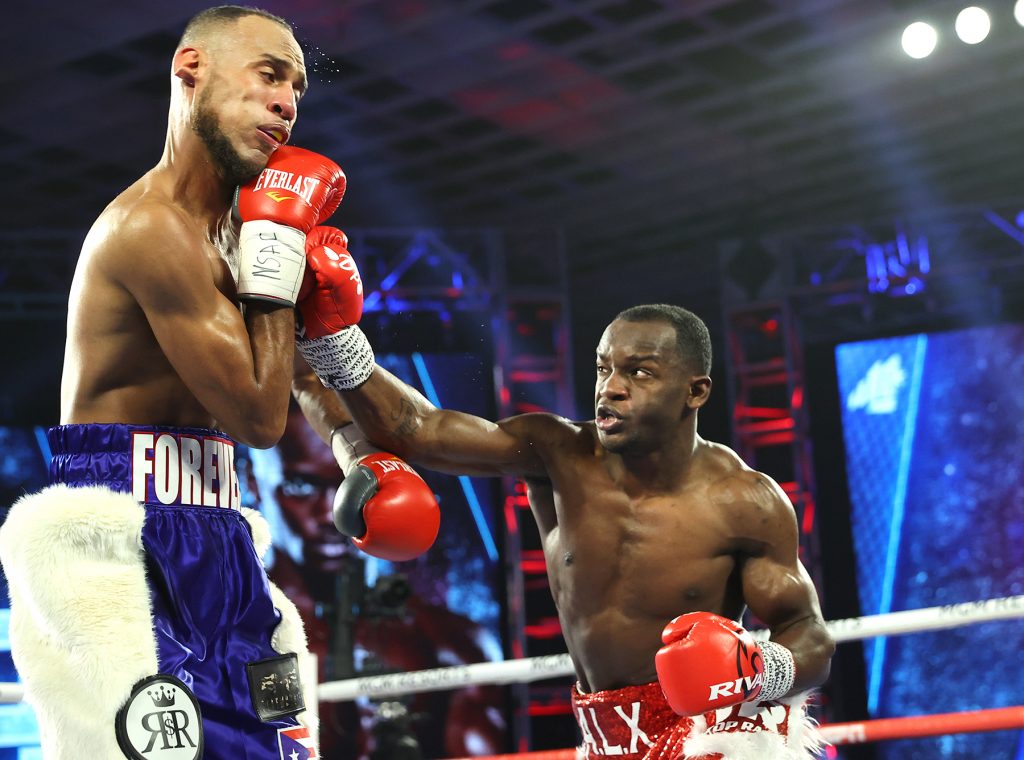 Isley, with welterweight titlist Terence Crawford working as an assistant in his corner, controlled the action throughout the fight as he landed plenty of left hooks to the head and body to go with a strong right hand. He also outworked Costello on the inside. With about 30 seconds left in the fourth round, Isley punctuated his win when he rocked Costello with a pair or right hands.

“It felt good to get in there and get (my debut) out of the way, get some rust off,” Isley said. “Going four rounds lets me know that we rehabbed (a shoulder injury) properly and did everything we needed to do to get back. Having ‘Bud’ in my corner gave me extra motivation, and I really appreciate that he came here to show his support.”

During his amateur career, Isley, who shares trainer Koroma with unbeaten rising star Shakur Stevenson, claimed a bronze medalist at the 2017 world amateur championships and hoped to make the 2020 U.S. Olympic team. But when the Tokyo Games were postponed due to the coronavirus pandemic, Isley, who owns amateur wins against Devin Haney, Israil Madrimov, Austin “Ammo” Williams and Sebastian Fundora, opted to go pro and recently signed a multi-year co-promotional deal with Top Rank and Antonio Leonard.

— Lightweight Eric Puente (5-0, 0 KOs), 21, of San Diego, California, pressed the action enough to win all four rounds against Sergio Vega (2-1-1, 2 KOs), 27, of Sacramento, California, in a shutout decision. Puente, who was facing his first unbeaten opponent, won 40-36 on all three scorecards.

Puente, who is trained by Robert Garcia, is typically a counter puncher but came forward often and shaded the rounds. Vega picked up the pace in the fourth round and landed a couple of solid left hands but it was too little, too late.

Tucker, who turned pro last September after a standout amateur career in which he was ranked No. 1 in the United States at 138 pounds after winning the 2018 USA National Boxing Championships, quickly gave Rodriguez a bloody nose in the first round. He continued to have his way in the second round before landing a pin-point left hook to the liver that forced Rodriguez to take a knee in agony. He barely moved as referee Celestino Ruiz counted him out at 1 minute, 50 seconds.

— In the opening bout of the card, bantamweight Floyd “Cash Flow” Diaz (1-0, 0 KOs), 17, of Las Vegas, made his professional debut with a shutout decision over Fernando Macias (1-2, 0 KOs), 21, of Hanford, California. He won 40-36 on each scorecard as he cleanly outboxed Macias, who hung in there but was outclassed.

Diaz counted the late Roger Mayweather as a mentor and also spent a lot of time at Floyd Mayweather’s gym as a kid. He even gained attention as a six-year-old in 2010 when he was shown impressively hitting the mitts during an episode of HBO’s “24/7 Mayweather/Mosley.”