Adam Lopez Has A Nickname Which Fits His Ring Style, Displaying Tonight On ESPN 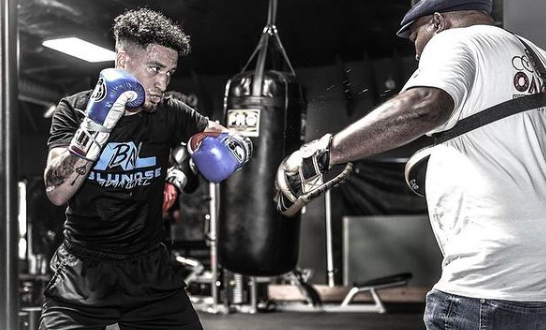 Adam Lopez has one of the best nicknames in boxing, arguably.

Because when you hear it, it perks your attention, and has you wondering what that’s all about. So you take a harder look at the 14-2 fighter from Glendale, CA who fights Jason Sanchez in a few hours at the Bubble in Las Vegas, on a Top Rank card.

Adam Lopez, signed to Sheer Sports management, is a Bubble vet, he met and downed Luis Coria on June 11, 2020.

I checked in with Blunose ahead of this assignment, and he brought me up to speed how he’s been passing the time during COVID.

“I’ve been training, training a few kids, a couple amateur fighters,” he said. He’s fortunate, he is not a juggler, he can concentrate solely on boxing, and doesn’t need to hustle for 9-to-5 money and then fit in training.

Adam Lopez probably popped on your radar when he gave Oscar Valdez a stiff test in their Nov. 30, 2019 clash. He showed ample skills and heart then, going up in weight against a much more experienced man…on one day’s notice.

And his fighting spirit when he kept plowing ahead when his dad died, when he was 15…and he also showed when he fought off COVID last year.

“In September,” he told me. “It wasn’t too bad, I was sick for three or four days. Those days were kinda rough.”

He’s been smart with his money, he saved most of his Valdez fight paycheck, he said, so that, and money from management, has meant he’s been solid with lodging and food, etc. 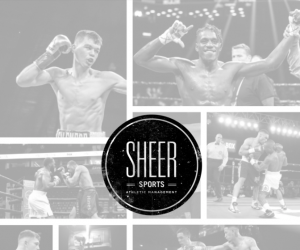 Adam Lopez gives credit to Sheer Sports for being a good outfit.

Yes, he was bummed when he didn’t get to fight on that Vasiliy Lomachenko-Teofimo Lopez card, as planned, on Oct. 17, because of the COVID protocol, but he sounds at peace with what life has handed him the last half year.

We talked some about that Valdez fight, too. “It was a partial blessing, it is what it is, I knew going in I was not supposed to win,” Adam Lopez said. “Some were very surprised how I was controlling the action at times. It boosted my stock, people know who I am now.” And for that one, he fought on short notice, so, he noted, when he has a full camp, as he’s enjoyed for this Sanchez fight, he’s that much better. 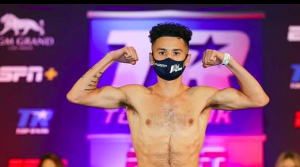 “I’m glad that people know who I am now,” Lopez said after “losing” to Oscar Valdez. “I can fight, this is what I do, it’s in my blood.”

“Jason Sanchez is a very tough opponent, who is coming to fight, but there’s levels to this, and I will show that,” the 24 year old fighter told me. “Is it meant to be 50-50 fight? Maybe, but I don’t believe it is, I think definitely it’s in my favor more. I’ve lost to two champions.”

He cites his first loss, which came on Dec. 8, 2017, to Stephen Fulton, the current WBO super bantam champion.

Adam Lopez has been working with Buddy McGirt, and on this fight night, he will seek to be evasive, make Sanchez miss, and frustrate him. “Then, once he’s mentally fatigued, go in for the kill.”

Oh, that nickname. It comes from his manner in the ring, his energy, his strength. Blue Nose pitbulls are a mix of Old English Terriers, vibrant canines, and Old English Bulldogs, which possess ample strength. Name fits.