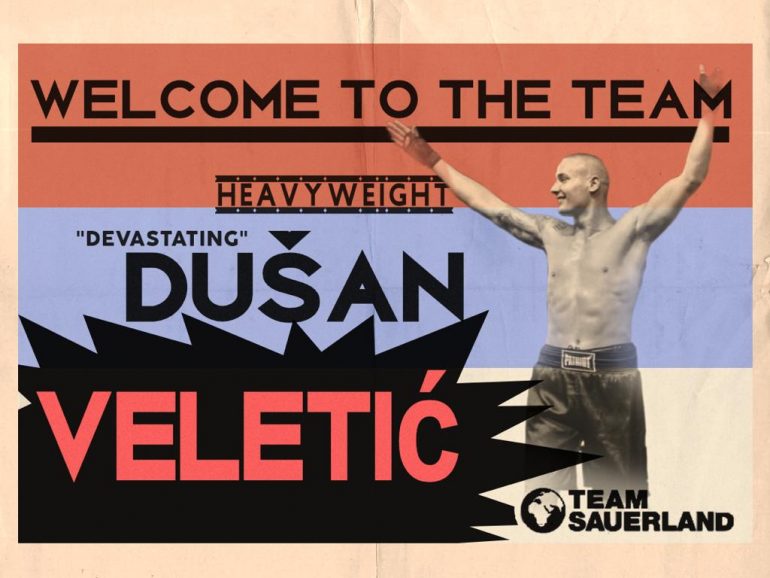 Arriving with a glowing recommendation from friend and fellow heavyweight Filip Hrgovic, Veletic, 25, has learned from invaluable sparring with ‘El Animal’, while at the same time building up an impressive early record.

His opponents in his first five fights have a combined record of 34 – 2, with four of them being undefeated, showcasing he is ready to move up through the levels of a packed division.

Veletic says he can’t wait to get going now that contracts have been signed.

“Team Sauerland is one of the major players in world boxing, I couldn’t ask for a better promoter to support me on my journey.

“Long term I want to be fighting at the top end of the division, but to get there I have to get through many tests and fight in big fights. The expertise within Team Sauerland is perfect to help me achieve that.”

The Serbian, who was born in Bosnia and Herzegovina, continued to talk about his sparring, and friendship, with one of the most feared fighters in the division, Filip Hrgovic.

“Filip is a good friend of mine and speaks really highly of the team. There is years of experience in house, experience I can learn from and allow to guide me. I’ve seen how they work with Filip and I’m excited to be a part of it.”

Promoter Nisse Sauerland spoke of his excitement at the new signing.

“Right now, the Heavyweight division is exactly what the public wants. It’s active, it’s exciting and there is an abundance of talent looking to get to the top. In Veletic, we have a fighter than contribute to that mix. His early experience has been perfect, he’s not been fazed at all by fighters with good records and he’s got the right attitude and mindset that made us want to sign him.

Filip (Hrgovic) has been sparring with him and speaks of his qualities, so now it’s time to get to work and see how far the journey can go!”

Veletic’s co promoter Zeljko Karajica added “Heavyweights always bring excitement and Dusan Veletic is no different, the future for him looks very bright. You have to make sure you manage a talent like this properly, and by linking up with Team Sauerland we’re putting Dusan in the best possible position to make a big impact on the heavyweight scene.

This year is set to be a really big one, we can’t wait to get working now.”