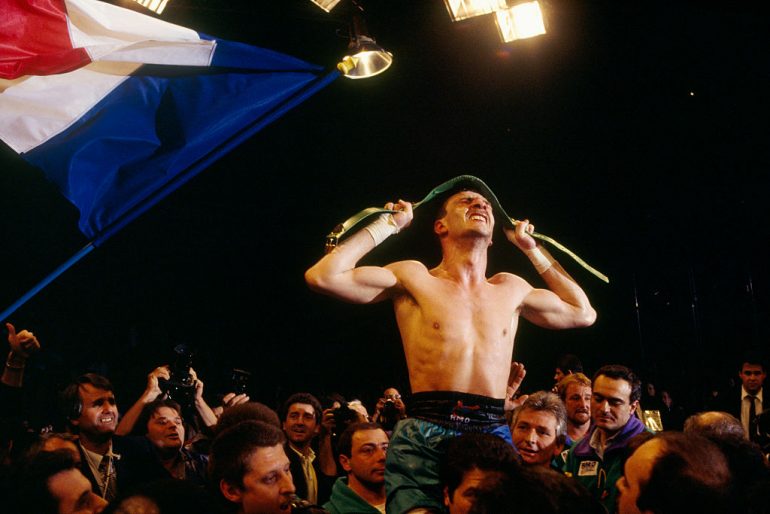 What a difference a year makes.

Fight fans everywhere remember the biggest upset in boxing history – heck, maybe the biggest upset in any sporting contest – which occurred on Feb. 11, 1990, when 42-1 longshot James “Buster” Douglas became the most notable conqueror named Douglas to appear on Japanese soil since Gen. MacArthur. When Douglas knocked out the undefeated and seemingly invincible Mike Tyson in 10 rounds in Tokyo, it truly was the shot heard ’round the world. 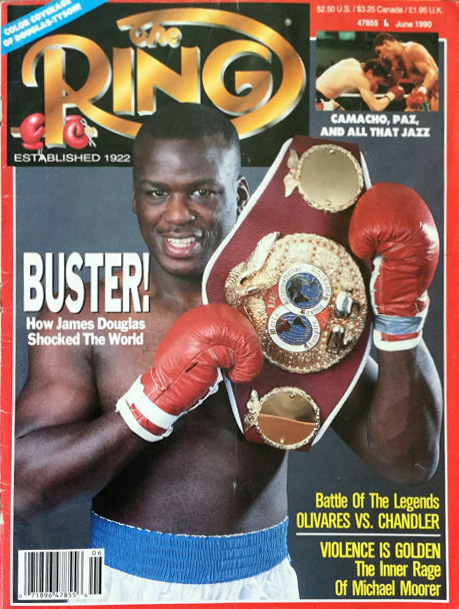 It was a foregone conclusion that Douglas’ takedown of the pugilistic Godzilla would be named The Ring’s Upset of the Year for 1990. But how many trackers of significant boxing dates recall what happened exactly one year earlier, when a world title challenger given roughly as much chance as Buster Douglas to shock a hugely favored champion also demonstrated that fights are won or lost in the ring, not on paper?

All right, so Frenchman Rene Jacquot’s unanimous decision over WBC junior middleweight titlist and future Hall of Famer Donald “The Lone Star Cobra” Curry, in Grenoble, France, didn’t register quite as high on the Richter scale as did Douglas’ earth-shaking demolition of Tyson in the Land of the Rising Sun. That could be because Curry, a blazing comet across the night sky who shared The Ring Fighter of the Year honors with Marvelous Marvin Hagler in 1985, had already entered the decline phase of a career whose prime didn’t last nearly as long as he or his many fans would have preferred. Being on the wrong end of 1989’s The Ring Upset of the Year was a repeat for Curry, who had been similarly tagged in 1986 after he was dethroned as undisputed welterweight champion by Jamaican-born, London-based Lloyd Honeyghan on Sept. 27 of that year in Atlantic City.

It is one thing for a fighter who appears to be so scary-good that he maintains the regal air of an all-time great to lose to someone of similar pedigree, but logic decreed that there was no possible way for Tyson to lose to an underachieving slacker like Douglas, or for Curry to fade badly from the middle rounds on in being outpointed by the likes of Jacquot. Curry, who had more than a little support as the best fighter in the world when he fully unified the 147-pound championship by bombing out the highly regarded Milton McCrory in two rounds on Dec. 6, 1985, was just 27 when his gas tank emptied against Jacquot in the Palais des Sports. The decision for the Frenchman – by margins of 117-113, 118-115 and 118-116 – was justified and untainted by allegations of home-country cooking.

The title reign for Jacquot, who came into the Curry fight with a 23-9-1 record and 11 wins inside the distance, proved to be brief. France’s first boxing world champion since bantamweight Alphonse Halimi from 1957 to ’59, he relinquished his title in his first defense, in which he was stopped in one round by John “The Beast” Mugabi on July 8, 1989. In fairness it should be pointed out that the fight was halted not so much because Jacquot was faring badly as because of the ankle injury he suffered from a slip that was serious enough to prevent him from continuing.

There would be two more shots at the brass ring for Jacquot, both of which went the distance and resulted in unanimous-decision losses: against WBC junior middleweight ruler Terry Norris on July 13, 1990, and Gianfranco Rosi on Nov. 30, 1990. Jacquot retired after the setback to Rosi without ever having fought as a pro outside of Europe, logging 29 bouts in France, seven in Italy, two in Switzerland and one in Germany. His name has never appeared on the ballot for the International Boxing Hall of Fame, but then again, neither has Buster Douglas’. 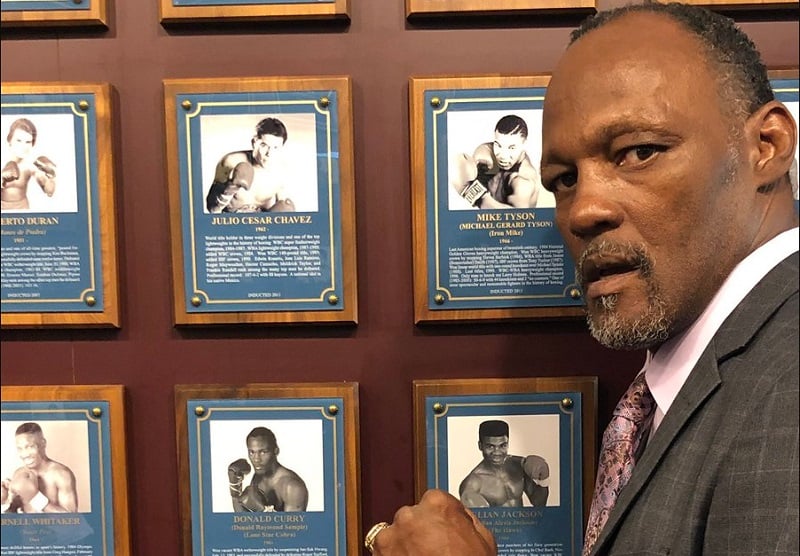 Assessing Curry’s place in boxing history is a bit more problematic. Although he was enshrined in the IBHOF’s Class of 2019 after his vote total had come up short for several years, the debate raged as to whether his incredible but relatively brief time on top offset his lack of longevity as an elite performer.

For sure, the Fort Worth, Texas, native could be and often was breathtakingly impressive. He won the WBA welterweight title, which had been vacated by Sugar Ray Leonard, rising from a knockdown to score a 15-round unanimous decision over South Korea’s Jun Suk Hwang on Feb. 13, 1983, in Curry’s hometown. Two bouts later, he added Marlon Starling’s IBF strap on another UD on Feb. 4, 1984. But it was his triple crown matchup with McCrory, the WBC ruler, on Dec. 6, 1985, that certified him as a cut above mere alphabet place-holders. McCrory, a Kronk Gym product who came in 27-0-1, with 22 KOs, was regarded as the litmus test by which Curry would or wouldn’t take the next step up to an even more rarified plateau.

The first round wasn’t half-over when Curry wobbled and hurt McCrory with a ripping left hook that sent him reeling back into the ropes. Although McCrory somehow made it to the bell, his prospects of surviving long enough to make a real fight of it were quickly dashed. Curry wasn’t about to let the still-buzzed McCrory escape, and he registered two quick knockdowns, the second of which put his fellow champ down and out. Not that it was necessary, but referee Mills Lane went through the formality of a 10-count. He could have counted to 50 and McCrory still would have been prone.

But as was the case with Tyson, whose slippage from his career-best, one-round destruction of Michael Spinks on June 27, 1988, was glaringly evident when, after two more KO victories in which he was barely tested, he was tuned up by Douglas, Curry had been rapidly devolved into a lesser version of himself. The reasons for that, or at least the explanations, are many. Had he stayed too long at welterweight, over time depleting himself from trying to pare down to 147? Was it frustration from failing to get the big-money, high-visibility megafights with Leonard, Thomas Hearns and Aaron Pryor that would have substantially fattened his bank account and certified him as an indisputable legend?

Curry himself chose the second option, which he said opened the door for the comeuppance he received against Honeyghan, who, it should be said, was more formidable than Jacquot and never should have been considered a gimme win for the Cobra. It was nonetheless a stunner when Curry, behind on all three official scorecards, did not leave his corner for the seventh round.

“I fought off motivation,” Curry said in 2018. “If I thought that you were a real threat to my career, I’m going to work my butt off to get ready to fight you. That guy, all I knew is that he was named Honey something. I didn’t really know who he was. After the Milton McCrory fight, I was looking for something bigger and better. That was my attitude.

“They told me he was ranked No. 1 (by the WBC), but I didn’t really follow the ratings. His name didn’t ring any bells with me. My idea was to defend my title against him and move on to that really big fight I wanted. I wasn’t mentally ready for that fight. If I had been, beating that Honey guy would have been no problem.”

If something waddles like a duck, quacks like a duck and has webbed feet, it’s probably a duck. The same with excuses; some of the ones Curry cited for his loss to Honeyghan were dusted off for the Jacquot debacle. But those seven years of brilliance, during which he was 25-0 with 19 KOs up to the Honeyghan fight, resonated with IBHOF voters enough to offset his 8-5 mark in the five years thereafter, four of those defeats coming inside the distance.

All Fights of the Year are not created equal. Neither are all Upsets of the Year. February 11 always will be the date most associated with Buster Douglas’ knockout of Mike Tyson. But Rene Jacquot’s moment of glory 365 days earlier against Curry also deserves consideration, for many of the same reasons, if not to the same degree.