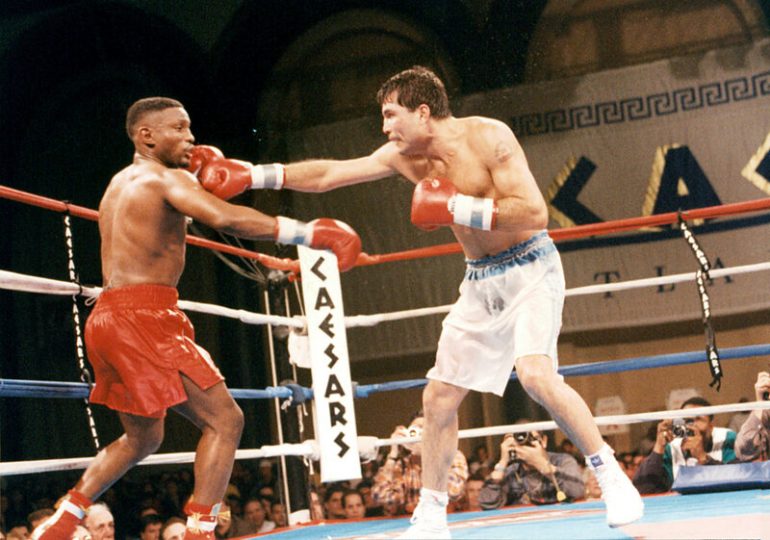 Vasquez (right) against Pernell Whitaker in 1995. Photo from The Ring Magazine archive
10
Feb
by Anson Wainwright

Julio César Vásquez was a two-time junior middleweight titleholder in the 1990s and is recognized as one of the best fighters to ever come out of Argentina.

Vásquez was born in Santa Fe, in the north east of the country, on July 13, 1966. He was the third oldest of five children.

“There was little money at home, typical of lower class,” Vásquez told The Ring. “I couldn’t even finish primary school. I had to help my father by working as a construction worker.

“There were times we didn’t have enough to eat, although I still have good memories of happiness in my childhood.”

Vásquez always liked boxing, and when he was 11 or 12, he visited a sports store and things progressed from there.

“Every Christmas, my father used to buy boxing gloves for my brothers and me,” he recalled. “The three of us used to play. It was like sparring but playing. I even remember neighbors coming to watch us.

In June 1986, Vásquez made his professional debut at the famed Luna Park Stadium, winning a six-round decision over Marcelo Chancalay. He won his first 30 fights, mostly in Argentina, and was then matched with little-known Verno Phillips in June 1991.

“It was a very strange fight,” said Vásquez of his sixth-round disqualification loss to the future three-time world titleholder. “First of all, I have to admit, I wasn’t in the best shape. But I was also told I had to take the fight because if not I would waste a very important chance waiting for me.

“From the fourth round onwards, the fight was riddled with fouls, from both sides. The referee (Juan Roberto Benítez) lost control of it. In the sixth round, I was very tired, I was losing the fight, and, I’m not going to lie, I bit him on his shoulder. The ref [initially] gave me the fight.”

The next day, there was a meeting, and the authorities decided to change the result to a disqualification win for Phillips.

After getting himself back in the win column, Vásquez met the experienced American Tyrone Trice in an important crossroads fight in France. He stopped Trice in nine rounds, making back some of the ground he had lost against Phillips.

The proud Argentinean stayed busy over the next 15 months, and when then-WBA junior middleweight titleholder Vinny Pazienza was involved in a horrific car accident, the title was declared vacant. Vásquez claimed the belt with a first-round knockout win over Hitoshi Kamiyama, in Buenos Aires, in December 1992.

“Of course, it changed my life,” he recalled. “I became more popular.”

Although Vásquez fought at home often, he also risked his title on the road by venturing to France, Spain, Monte Carlo, Kazakhstan, America and Northern Ireland. He was always ready and stayed in shape during this extremely busy period in his career.

“I believe, as many people say, that I was a great champion,” Vásquez said proudly. “I always stepped in the ring properly trained. I faced really good fighters and beat them. They all had very different styles, and there was little time to prepare between one fight and the next one.

“I used to train a lot. That was my only secret. Some fighters trained from Monday to Friday, others from Monday to Saturday. For me, there were no weekends. I used to get up early in the morning, and at 9 a.m. I was already running and getting ready to train in the afternoon as well. I took it really seriously.”

In March 1995, in Atlantic City, “El Zurdo” met the brilliant Pernell Whitaker, who was bidding to become a four-weight world champion.

“I remember when I was just beginning my career, I would watch him fight on TV and I admired him,” said Vásquez. “When I was told I was going to face such a major star of boxing, I just couldn’t believe it. Life surprises you sometimes, and that was one of my biggest surprises.”

Ultimately, Vásquez lost a 12-round decision to the American superstar, but he still has fond memories of the bout.

“It was an honor to share a ring with someone like him and I treasure that,” he said. “Whitaker was a fabulous boxer. I have no doubt Whitaker was one of the greatest fighters of the last [several] decades.”

Vásquez wanted to retire after losing to Whitaker. However, he had made a promise to his brother that he would win another world title, and when they were involved in a car accident and his brother passed away, he decided to make good on that promise.

“I won a couple of fights, and only a few months after losing the title, I had the opportunity to regain it against Carl Daniels,” Vásquez said of his come-from-behind victory that later won Ring Magazine “Knockout of the Year” “I was fighting a really hard fight, and I was thinking about my brother and the promise I had made to him.

“I destroyed [Daniels] with that punch [in Round 11]. And when the referee counted him out, I finally felt I fulfilled my promise to my brother. I couldn’t have gone back to Santa Fe if I had lost.”

“I should have beaten Boudouani,” he said. “With all due respect, at that time, he was a third-class fighter. Not a big deal. Now that time has passed, I think I could’ve done more.”

Vásquez continued his career but never again reached the upper echelons of the sport.

“Things were not the same,” he said. “I had several victories, but when you turn 35, 36, 37, you get old for the sport. I was near 40 and still boxing. When that thing you like a lot becomes difficult for you, you have to leave it.”

Part of the reason the former two-time titleholder fought into his late 30s was money problems.

“I used to lend, lend, lend and lend money but it was never returned,” Vásquez said. “I had, as we say in Argentina, “los amigos del campeón” (the champion’s friends). People appearing from all over the place and [I was] spending my money on them.

“I should’ve made more money. In the 14 world title fights, I must not have made more than one million dollars. That’s it. I was told I was going to make $3 million against Whitaker and I received only half a million.

“You can imagine how that affects you. I had a lot of anger. And all of that money disappeared. Nothing is left. It went and never came back. But I don’t regret anything.”

Vásquez, now 54, lives in Congreso, a neighborhood in Buenos Aires with his wife, Monica, and has a grown-up son. He works at the National Congress as a printer. In 2019, Vásquez received the prestigious Delfo Cabrera award for sportsmen.

The ex-champ graciously took time to speak to The Ring about the best he fought in 10 key categories.

BEST JAB
Winky Wright: It was a fast, straight and sharp blow. He was constant with it and made it very difficult job to shorten the distance. He had a lot of technique, particularly with that punch.

BEST DEFENSE
Pernell Whitaker: By far, he was the most difficult and had the best defense I’ve ever faced. It was incredibly hard to land shots on him. He had a unique and amazing ability to avoid almost every attempt to catch him with a powerful punch. The way he moved his body, together with his legs, his torso, and his defensive tactics, he was very hard to read. And after those movements, he answered with counterpunching. He was a genius.

BEST HANDSPEED
Tyrone Trice: He was very fast with his hands and could hit you from any angle when you never expected it. I had to think of every move in order to beat him.

BEST FOOTWORK
Carl Daniels: He was fast, a southpaw, and carried himself in an excellent way in the ring. He dominated his opponents with his footwork.

SMARTEST
Whitaker: He was extremely smart. He knew what had to be done and when to do it.

STRONGEST
Ramón Abeldaño: He was well known for his physical strength at that time and for resisting a lot of heavy punching. He rarely got knocked out. When I faced him, he had already been an Argentinean champion and won an international title, so he was confident in himself. He had a lot of experience (Abeldaño was 47-17-19, and Vásquez was 13-0). It was a very tough fight, but I finished it in the ninth round.

BEST PUNCHER
Aaron Davis: He got me with several hard shots – extremely hard. If I hadn’t been properly trained, I wouldn’t have tolerated them and, of course, I wouldn’t have won. I was at my prime. With Boudouani, I wasn’t in the shape I should’ve been in.

BEST CHIN
Tony Marshall: I remember hitting him during the whole fight and Marshall just [kept] taking all the blows and resisted to the end. Also, Akhmet Dottuev, Javier Castillejo, Anthony Ivory and Eusebio Escalante had good chins.

BEST BOXING SKILLS
Davis. He was extremely skillful. It was my mandatory defense of the world title and I had to face someone like him who was an excellent fighter. He was very aggressive and very talented. People generally remember him for his all-action style, but he also had very good movements, good technique with his fists, intelligence, and he had an enormous heart.

BEST OVERALL
Whitaker: No question about that. I have faced lots of very good boxers, I’ve had very hard fights, but there was nobody like him. He was the best by far.

Nicolás Samuilov helped co-ordinate and translate this feature. The Ring appreciated his assistance.