Harold Calderon, a welterweight bringing heat to Miami boxing, is ready to make his move 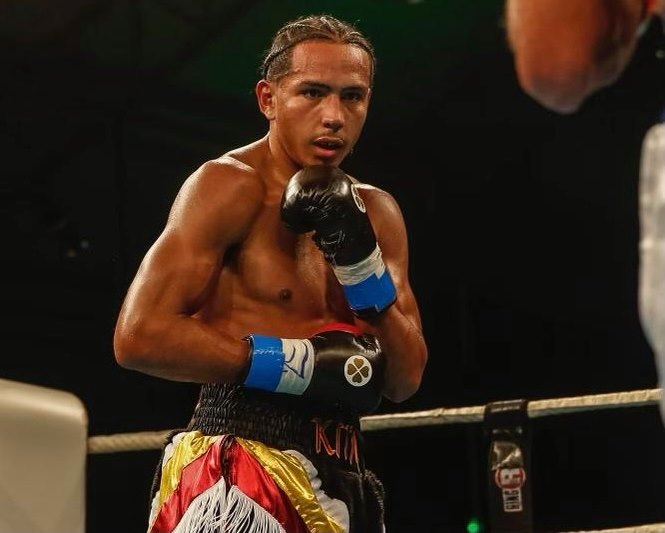 Harold Calderon may not yet be a nationally known boxer, but he’s already getting attention in his hometown of Miami. The unbeaten welterweight is a popular ticket seller in the South Florida area, and counts members of the Miami Dolphins and Miami Heat sports teams among his supporters.

But after he paid tribute to another Chicago-born Miami transplant – Heat great Dwyane Wade – walking to the ring in Wade’s “Miami Vice” jersey for his May 2019 bout against Marcelo Fabian Bzowski, Wade acknowledged the gesture on Twitter, writing “That’s tough!”

“That was a very special moment for me because Wade is my favorite athlete of all-time and that’s my favorite player,” said Calderon (23-0, 16 knockouts).

“King” Calderon is hoping to turn up the heat in his career, continuing with his next fight on Saturday, Feb. 20, when he faces Jonathan Eniz (25-14-1, 10 KOs) in the ten-round main event at the Doubletree Miamimart Hotel in Miami. The show, which will also feature the return of unbeaten middleweight contender Kanat Islam, will allow in fans at 50 percent capacity, with 1,200 tickets for sale.

The Argentina native Eniz has lost three of his last four bouts, but 2019 wins over Cesar Rene Cuenca (48-2) and Deniz Albany (21-1) suggest he has potential to be a spoiler.

For Calderon, it matters little who his next opponent is, as long as it brings him closer to his goal.

“Whoever they put in front of me I’m down to fight, but my goal is just world titles,” said Calderon, who trains with Reniel Aponte and Michael Robles. “I’m not looking for nobody else, only the champions. But if somebody’s in my way that’s stopping me from getting there, then I’m ready to handle business.”

One of four boys born to Honduran immigrants, Calderon and his family moved from the Windy City to Miami when he was five years old. The rough surroundings he found himself in made him realize he had to be ready to protect himself at any time. “That kind of brought out the fighter in me because you always had to fight for your own out there,” said Calderon. Life settled down a bit when he moved to Miami Lakes, and he started focusing more on school. He attended American Senior High School in Hialeah, where he wrestled in his junior and senior years.

After wrestling season ended in senior year, Calderon started looking for another sport that could bring him the same thrill. Rocky Coello, a local amateur boxer who invited the teenaged Calderon to train at his small home gym, could see his enthusiasm for boxing early on. “Harold had the discipline and perseverance to just stick to boxing and let nothing else drift him from boxing,” said Coello.

Calderon’s love for the sport was solidified when a friend named Kevin brought him to the Miami Police Athletic Gym, and he remained an amateur for about six or seven years, winning a few state tournaments and competing at the nationals once. The highlight of his amateur career came in 2013, when he represented Honduras at the Central Olympic Games. Calderon earned a silver medal after an 18-11 loss to Carlos Tobar of Guatemala in the 69-kilogram final.

Though he didn’t grow up watching boxing, he quickly gravitated towards Floyd Mayweather Jr. as his favorite fighter, and adopted his defensive mindset. Calderon stands 5-foot-11 and boxes out of a southpaw stance. There are no notable opponents on his resume’ so far, and his best appearing win was a 2018 decision over the 10-0 John David Martinez, though a look at Martinez’s record shows he had just one win against an opponent with a winning record. Calderon freely admits that he’s been “learning on the job” in his pro career.

A look at his age – 33 – will set off some alarms in fight fans, but Calderon says he’s right where he needs to be.

“I don’t pay attention to the age thing, or [think] I started late. I did everything right, I took my time to learn the game, to learn the art and that’s the difference,” said Calderon.

Calderon didn’t have a promoter when he turned pro in 2013 in Colombia. Now, he’s got the backing of Gary Lewis of Signature Punch Management, along with co-manager Nelson Lopez Jr.

Lopez Jr., an influential matchmaker who works with Premier Boxing Champions, among other companies, says this will be the first time that Calderon will have serious financial investment in his career to get him to the next level.

Calderon had been rated at no. 14 by the WBA late in 2019, but fell out of the rankings before he could get back into the ring in November of 2020, when he knocked out Gustavo Vittori in four rounds. But after numerous fight dates fell through during the pandemic, Calderon is confident he can build his momentum in 2021.

“I think I just need the opportunity,” said Calderon. “I’ve been trying to create that myself with me and my team and I think it’s here now after this fight.”