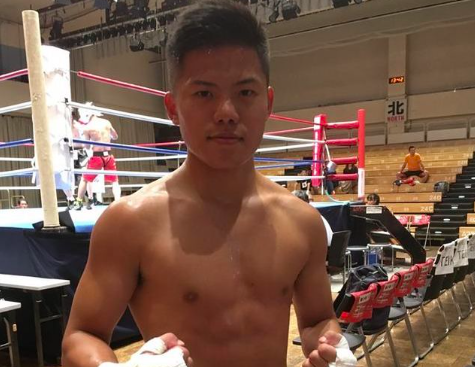 Best night of pro career and why: It is still very early in Shigeoka’s professional career. He made his debut in October 2019 but has seen his activity stunted due to the COVID-19 pandemic.

“Since turning pro, I have had two fights,” Shigeoka told The Ring through Hank Hakoda. “My best bout is yet to come.” 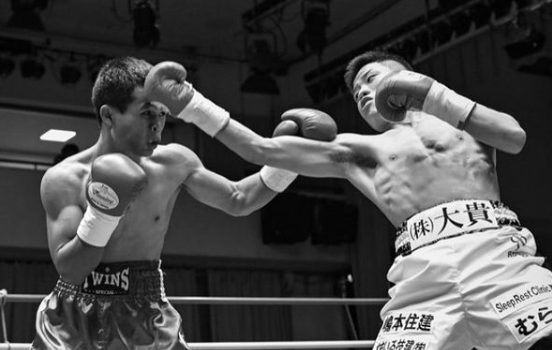 Yudai Shigeoka slipping inside the lead hand of his foe, and shooting a straight right upwards.

Worst night of pro career and why: Although Shigeoka has largely had things his own way so far, he believes more is to come.

“I have not been able to demonstrate the kind of boxing I ideally want to, and I am not satisfied with either of my bouts,” he said. “My two pro outings so far were not that bad actually, even though I was not fully satisfied with my performance.

“I could feel my growth and I found room for improvement as a fighter. Especially from the second bout, I found more homework and takeaways than [from] the first one.”

What’s next: Shigeoka returns in a scheduled eight-round contest against Ryu Horikawa (3-0-1, 1 KO) at the Korakuen Hall, Tokyo on Thursday.

“I have to give my next opponent adequate credit, he is a skillful fighter and I am not taking him lightly,” said the 23-year-old, who is looking to gain valuable experience along the way. “But if I simply aim to win in a dominant fashion over him, I could do it comfortably, showcasing my boxing I.Q and my boxing ability.”

Why he’s a prospect: Shigeoka was a talented amateur, he won five national titles and was the All-Japan champion in 2018. He also won four national titles at pinweight when he was at high-school. He also reached the final of the World University Championships in Russia in 2018.

He harbored hopes of representing Japan in the 2020 Olympics but when the junior flyweight (49KG) division was expunged he decided to turn professional.

“I have a long meaningful experience as an amateur, where I developed my sophisticated boxing skillset,” said the southpaw. “I can outclass my opponents even as a pro by dodging punches, picking up the pace and points wisely. With the boxing arsenal I already have, it is easy for me to avoid risks, control every second of the bout and win on points.

“As a pro fighter, however, I want to be more than that, performing in a more appealing manner to the audience by beating up my opponent. That is what I am working on now.”

Shigeoka regularly spars with The Ring and WBA 108-pound titleholder Hiroto Kyoguchi and younger brother Ginjiro Shigeoka, who we featured as a New Face. He has also sparred with [flyweight] Taku Kuwahara (7-0, 4 KOs). 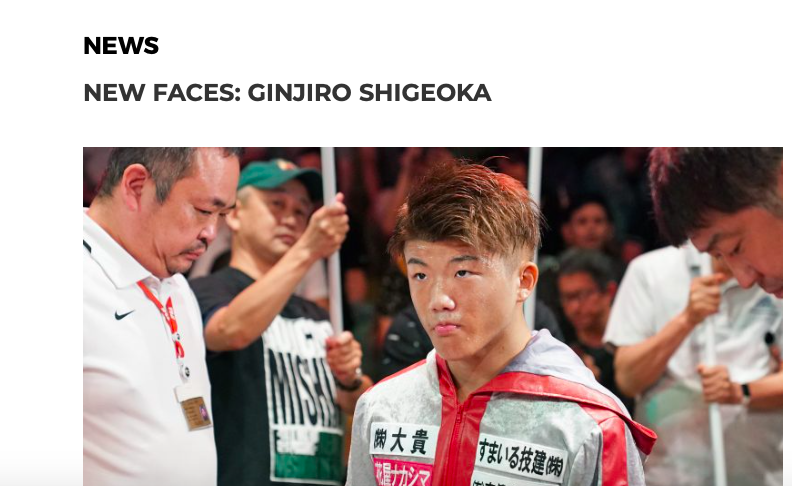 Shigeoka feels that the friendly competition with his brother helps him raise his game.

“What sets me apart from other boxers the most is that I have my brother who is always close to me,” he explained. “My brother and I inspire each other. He helps me a lot not only in my training but also in fights, giving me advice, and vice versa. I do not believe there is anyone who can beat him in the minimumweight division.”

He feels he has several key strengths in his game.

“My technical strength,” he said. “I am confident in my uppercut, which is very difficult and risky to throw. I can throw any punch at any distance as well as in any position. I am always cool and collected to assess the situation accurately and I can throw a series of necessary punches at the very right moment.”

His handler, Mr. Watanabe, believes even with a limited pro career that his young fighter is already past the local and regional scenes.

“Although Yudai has only had two professional fights, I believe that he already deserves better (opponents) than the Japanese and OPBF champions. Sorry, if this sounds arrogant,” said the promoter.

Watanabe has found it increasingly difficult to match his fighter.

“Due to the coronavirus pandemic here in Tokyo, I cannot bring any fighters from abroad for Yudai and Ginjiro to develop their ring experience,” explained Watanabe. “Even in Japan, none of the fighters listed in the ratings are willing to take a risk to fight the Shigeoka brothers.”

The possibility exists that in the coming years the Shigeoka brothers could be like the Klitschko and Charlo brothers, competing for world titles in the same division.

Watanabe is blessed with a three talented strawweights and feels developing and moving all three is a good problem to have.

“Yudai has a slightly larger body frame than Ginjiro,” said Watanabe. “Yudai can make strawweight without extreme efforts, and I am sure his best weight division at the moment is minimumweight.

“Yudai also has a strong will and desire to fight at strawweight. However, in my gym, we have his younger brother Ginjiro, who is very promising, and Masataka Taniguchi, who is already the Japanese 105-pound champ.

“As the owner and the promoter of the gym, I am so happy and honored about it… a very good problem to me, but at the same time it is a difficult matter for me to make them compete for the world title in the same category. I hope these promising fighters will keep me busy this way [laughs].”

Why he’s a suspect: While Shigeoka appears to have the requisite ability to go a long way in the sport, there are areas which he needs to brush up on.

The young Japanese fighter is currently focusing on building his physical strength.

“I proactively adopt a special training routine of hitting the big bag for 10-rounds with little rest,” he said. “This is to build hand endurance. I keep hitting the bag with only 30- or 60-seconds break. This is a tremendously hard but a worthwhile sacrifice. I am looking much further [down the road] than where I am now. I have to be ready for the world title bout anytime.”

Like most all fighters, he thinks 2020 was a frustrating year.

“Last year was the mentally toughest year of my life,” he said. “Ever since I was a little kid when I started boxing, there was never a year without a fight. During the hiatus, I was like, ‘What the hell am I boxing for? I am training hard every day, strengthening my stamina, but where am I going to put this to use?’ I lost my goal, there was no chance to demonstrate these efforts.”

However, he remained mentally strong with the help of his brother.

“I never skipped a training session and was dedicated in the gym believing the next bout will come,” he said. “If I had been alone without my younger brother Ginjiro, I might not have been able to do it like this. We encouraged each other and managed to stay focused on what we were supposed to do even in such a difficult period.”

Watanabe believes that what Shigeoka needs most at this stage is experience.

“He only needs to accumulate more pro career,” said Watanabe. “However, it is really difficult to find an opponent at minimumweight and even at junior flyweight. We had to literally contact every Japanese fighter listed in the rankings. We then finally found his opponent.”

Storylines: Shigeoka was born in Kumamoto, in the south of Japan. As a teenager he first discovered boxing.

“I had been doing karate since I was a child,” he said. “But when I was 13, my father encouraged me to start boxing.”

Although the lighter weights aren’t as popular in the west as they are in Asia, Shigeoka hopes along with his brother they can shine a light in the smallest weight classes as they progress in their careers.

“I will definitely make myself recognized worldwide by fascinating fans with eye-catching bouts,” he said. “Without a doubt, my younger brother Ginjiro (see below left) and I will become world champions, and we will become boxers whose names are clearly recognized worldwide. We will be prestigious champs in the eyes of all boxing fans.”

Interestingly, away from boxing Shigeoka has a passion for coffee and hopes to one day further expand in that area.

“I enjoy drinking the various coffee beans that I grind myself,” he said. “My favorite coffee beans are the aromatic Kenyan beans, which give me a relaxing time after my hard training.

“Actually, you know one of my dreams is to open a small coffee shop in the future after I retire from boxing.”