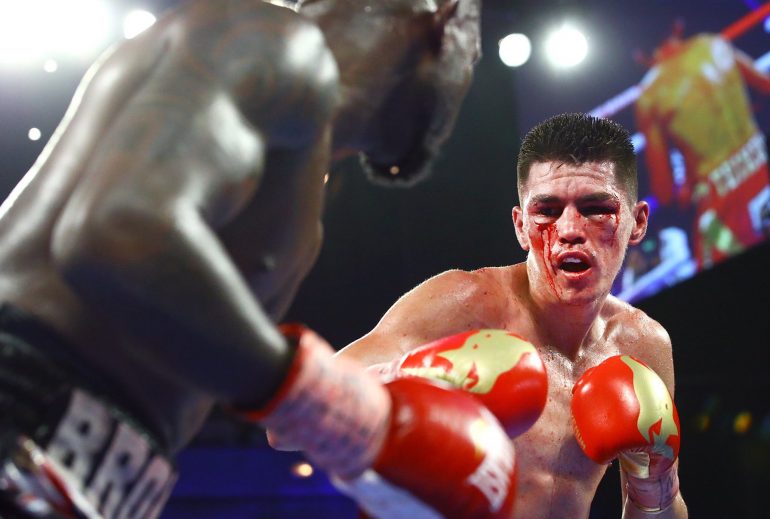 Patrick Teixeira has come a long way since growing interested in fighting after renting Bruce Lee DVDs as a boy to the perch he now occupies as a junior middleweight world titleholder ready to make his first defense.

“My stepfather always talked about Bruce Lee to me. He said he was a great fighter, so I decided to rent some DVDs at the time and started watching Bruce Lee’s movies,” Teixeira told The Ring through a translator. “When I turned 13, I decided to look for some martial arts to defend myself. It was when I found a boxing gym that my stepfather took me to. I started practicing, fell in love and never left.”

Teixeira turned pro in 2009 and has had a long journey to a world title. He suffered his lone defeat by second-round knockout to big puncher Curtis Stevens in a middleweight fight on the Canelo Alvarez-Amir Khan undercard in Las Vegas in 2016. But Teixeira rebounded to win five fights in a row, including an upset unanimous decision in his most recent bout against then-undefeated Carlos Adames, whom he knocked down in the seventh round, in November 2019 in Las Vegas.

While the fight was technically for the WBO interim belt it was for the de facto vacant title because Mexico’s Jaime Munguia, who held the title at the time, had already said that he was going to move up to the middleweight division and had no plans to defend his 154-pound title again. Soon after Teixeira defeated Adames, Munguia made his move official, vacated the belt and Teixeira was elevated to the sanctioning organization’s full titleholder.

“Winning the world title was a dream come true,” said Teixeira, who is one of five Brazilians to win a world title along with International Boxing Hall of Famer Eder Jofre, Acelino “Popo” Freitas, Miguel de Oliveira and Valdemir Pereira. “It really is a very rewarding thing to see the work being rewarded. It was 12 years of hard work and dedication. Thank God everything went well.”

But he did not get a chance to celebrate his victory like he hoped to.

“When I arrived (home in Brazil it) was time to make a big noise. The problem that immediately followed was the pandemic,” he said. “It complicated the country in general.” 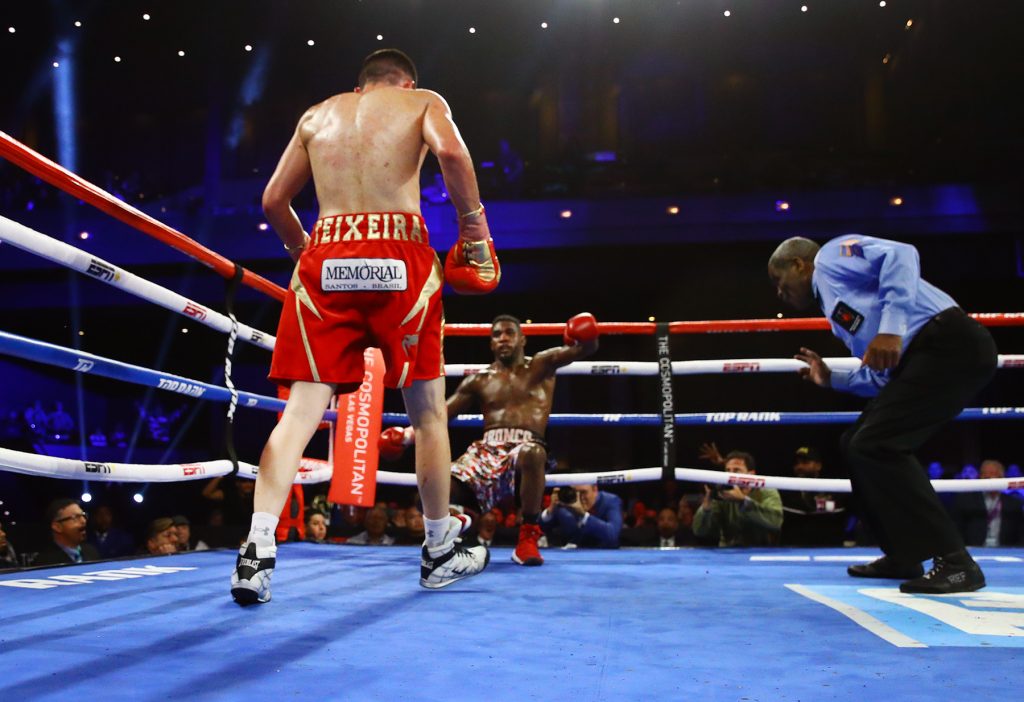 Teixeira sent Adames reeling into the ropes for a knockdown in Round 7. Photo by Mikey Williams / Top Rank

Because of the coronavirus pandemic and visa issues, Teixeira has not fought since beating Adames, but he will finally meet mandatory challenger Brian Castano in their overdue bout on Saturday (DAZN, 8 p.m. ET) at the Fantasy Springs Resort Casino in Indio, California. The bout is the co-feature on the Golden Boy Promotions card headlined by junior lightweight world titlist Joseph Diaz Jr. (31-1, 15 KOs) making his first defense against Russian mandatory challenger Shavkatdzhon Rakhimov (15-0, 12 KOs).

Teixeira (31-1, 22 KOs), 30, a southpaw, and Castano (16-0-1, 12 KOs), 31, from Argentina, who also has not boxed since knocking out Wale Omotoso in the fifth round in November 2019, were initially scheduled to meet on April 25, 2020, also at Fantasy Springs. However, the card, like so many others last spring, was canceled when the sports world shut down because of the uncontrolled spread of COVID-19.

Teixeira had hoped to fight Munguia for the title rather than Adames for the interim version, but Munguia was already on his way out of the weight class and never showed any interest in the bout even though it would not have been complicated to make since they share promoter Golden Boy. At the very least, Teixeira reasoned that if Munguia did not want to fight him he could have at least vacated in time for the bout with Adames to be announced as being for the full title instead of the interim belt.

“We tried to fight with Munguia several times and he just ran,” Teixeira said. “He could have let go of the belt before, only they preferred to make an interim (title fight). I don’t really care. Munguia knew that if he fought me it was risky for him. My manager, Patrick Nascimento, did a great job of putting me at the top to dispute the belt and be mandatory. Munguia noticed that I was going up (the rankings) and preferred to change divisions.”

Teixeira entered the fight with Adames as the clear underdog and that was even without the public being aware that he had not had the ideal preparation, which made his upset in the ESPN-televised bout even more impressive.

“Three months before the fight, my Brazilian promoter, Edu Mello, passed away,” Teixeira said. “I was unable to travel to the United States to prepare and I had to do my preparation in Brazil. His dream was for me to be a world champion. It hurt me a lot because he couldn’t see it here on earth. But I know that he was with me that day. I fought in memory of him.

“I was very confident even though I didn’t have the best sparring and my physical trainer was not with me. We improvised the work and in the end everything worked out.”

Now, Teixeira must face Castano, who owns solid victories against Michel Soro, Cedric Vitu and Omotoso as well as a draw with former titleholder Erislandy Lara, all in his last four fights. 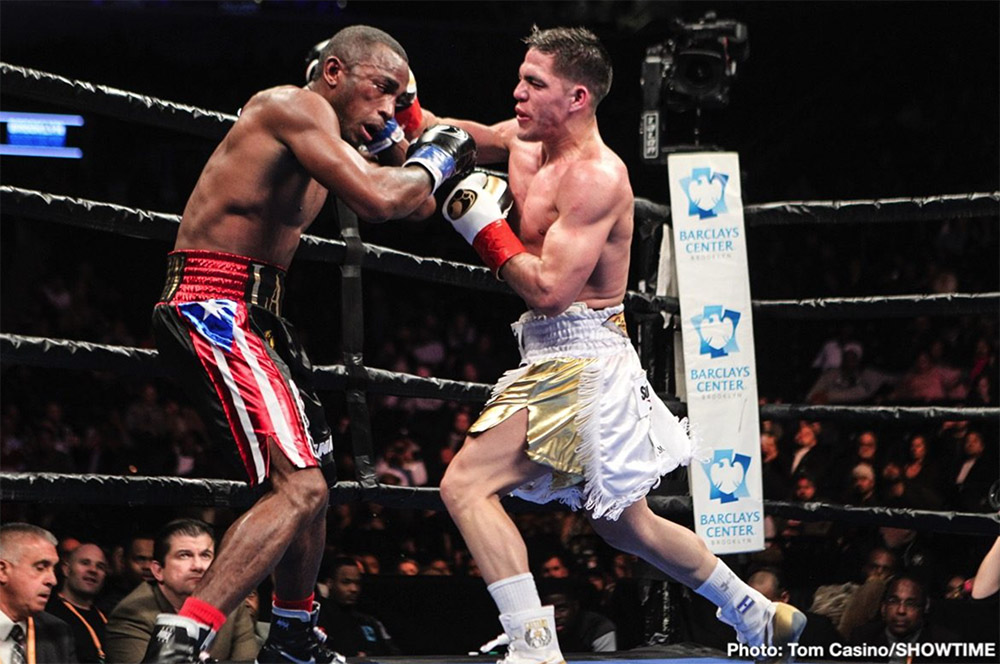 Castano (right) mixing it up with Erislandy Lara.

Teixeira and Castano are familiar with each other and there is a respect between them.

“Castano is a tough opponent,” Teixeira said. “I already had the opportunity to do sparring with him. I know him very well. I believe we did sparring twice. We were getting ready for a fight together. I believe it was before he fought Lara (in March 2019), but this sparring doesn’t mean much. I evolved a lot after that and I believe he did too. On Saturday in the ring there will be a lot of evil. After the fight the friendship continues.

“I am working very hard. I am working for the 12 rounds, but I know that I have the power to knock him out. The fight will really be a war and I’m ready for it.”

To get ready for the fight, Teixeira brought in his onetime rival Adames to be one of his sparring partners at his Oxnard, California, training camp. Adames was also getting ready for his own return to the ring for the first time since losing to Teixeira on the Top Rank undercard in Las Vegas on Saturday night.

“I have nothing against Adames. He is my friend and we did sparring at this camp,” Teixeira said. “We worked very well. Vergil Ortiz also helped me a lot in sparring. We are ready.”

Teixeira is aiming for a much more significant fight if all goes well against Castano. He wants to fight Jermell Charlo, the Ring junior middleweight champion, who unified three major sanctioning organization belts by knocking out Jeison Rosario in the eighth round in September. Teixeira said he would also welcome a chance to fight WBO welterweight titleholder Terence Crawford if he wanted to move up to junior middleweight and try to win a title in a fourth weight division since he has not been able to get any of the top welterweights to fight him.

“Have no doubt that I want all 154-pound titles,” Teixeira said. “But Jermell ‘Little Kitten’ Charlo cannot run this time. After my mandatory defense, I will sit down with my manager and see what the plans will be. Charlo and Crawford are in our plans. I want the big fights.

“Crawford is a super fighter, but if he is not able to fight in his category, could he go up? I’m sure I can beat him. He wants to be a superstar like (Manny) Pacquiao. So, get up and try to beat me and try get one more title. I will be ready for the big fights. I respect Crawford and admire him, but this is my moment.”