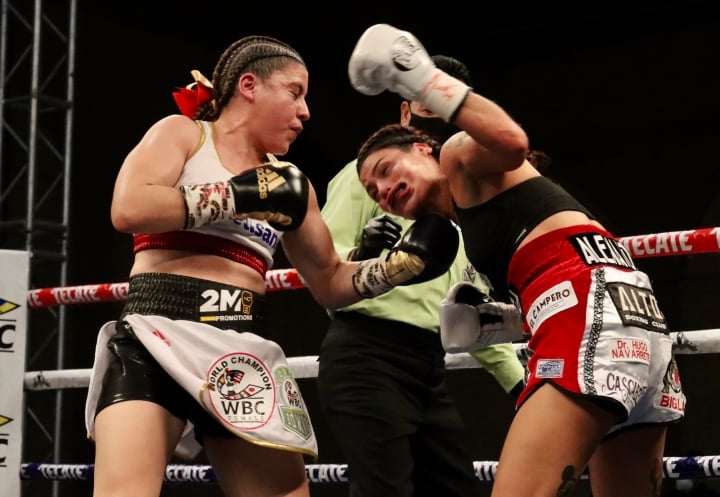 Yamileth Mercado retained her WBC female junior featherweight title with a hard-fought unanimous decision over Julissa Guzman at the Jardines del Pedregal in Hermosillo, Mexico on Saturday. The scores were 98-92, 98-92, and 98-93.

Mercado (17-2, 5 knockouts) was making the first defense of the title she won from Fatuma Zarika in November 2019. In her last bout, on September 25, the 22-year-old from Cuauhtemoc, Mexico stopped Irasema Rayas in the fourth round of a non-title affair.

Guzman had not fought since scoring a third-round win over Maria de los Angeles Nunez in November 2019.

Mercado was the more accurate fighter from the opening bell, connecting both on the inside and from distance. Guzman attempted to walk her opponent down but absorbed jabs, straight right hands and the occasional uppercut to the head.

Guzman’s persistence and aggression did pay off in Round 7 when she hurt Mercado who attempted to hold and fought cautiously during the final minute of the round. Mercado continued to box effectively for the next two sessions but was hurt again late in Round 10. Guzman battered Mercado for several moments before the bell sounded.

Garcia was the aggressor from the beginning, hurting Nery during the opening round. Garcia never let up, throwing vicious crosses and hooks to head and body. Undaunted, Nery chose to trade and found some success, but Garcia was the more effective fighter throughout much of the contest.

The card was promoted by Zanfer Promotions and aired live throughout Mexico on Azteca TV (Channel 7).