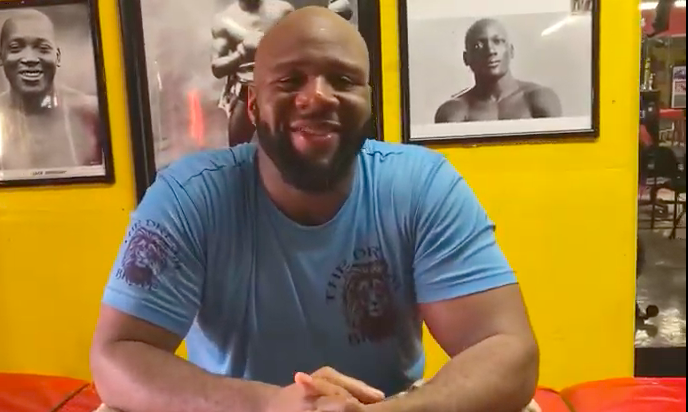 THURSDAY UPDATE: Heavyweight Trevor Bryan needed a dance partner to waltz with Friday night on that Don King card, and he’s got one, in Bermane Stiverne.

The King event, to unfold at the Hard Rock in Hollywood, Florida, was to be topped by a Trevor Bryan vs Mahmoud Charr contest, in a WBA titlist consolidation clash. But Charr didn’t make it to America from Germany, so King called around to see who’d like to get some work and a check. Stiverne said he would.

Team Bryan sent us a pic from the Thursday weigh in, and informed us both men were 267 pounds. 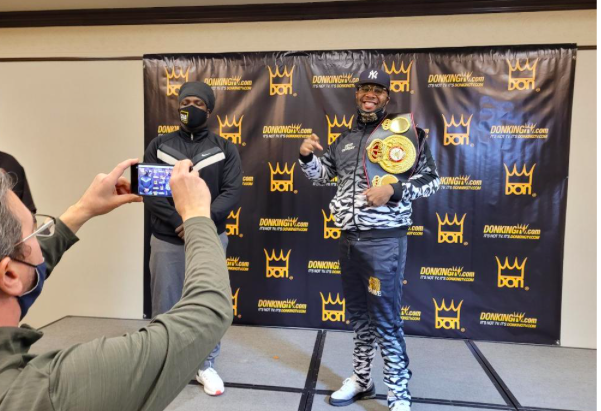 Bryan looks enthused that the drama was ironed out, and the show will go on. Stiverne looks mellow, at a Thursday weigh in.

We the media don’t see Trevor Bryan in a ring that much, and so we don’t hear from him all that often.

Makes sense, the 31 year old fighter last gloved up on Aug. 11, 2018, when he defeated BJ Flores and with that victory was able to claim the WBA interim heavyweight title. He’s held onto the strap, despite not having fought in 2019, or 2020. And, judging by his tone during a Wednesday night phone hit with RING, Trevor Bryan seems to be wanting to make up some ground on Friday, on a Don King card set to unfold in Hollywood, Florida. 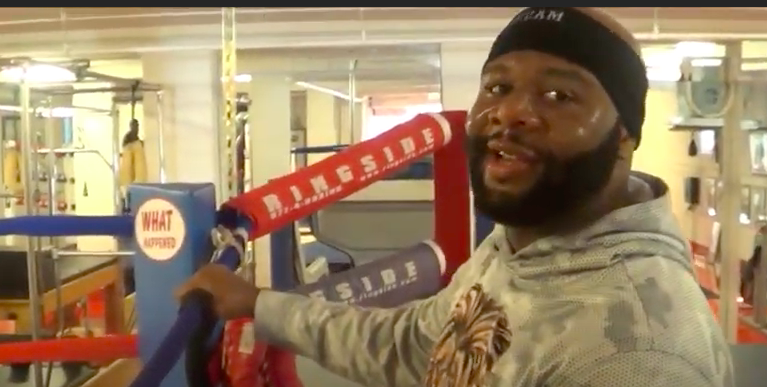 I don’t remember having talked to Bryan before, though I have to believe I did at some point. He turned pro in 2011, and has been readying himself in his mind to battle Mahmoud Charr at the Hard Rock Casino.

Really, I wasn’t sure if Bryan maybe didn’t enjoy doing media at all, so I came from of a starting point of the possibility that maybe the 20-0 fighter dislikes the press….

“I love the press,” Bryan told me during a chat which included co-manager Messiah Eaddy. “On Friday, I’m fighting, in Hollywood, Florida, and it’s going down, “The Greatness Returns!”

That’s what it says on the poster. 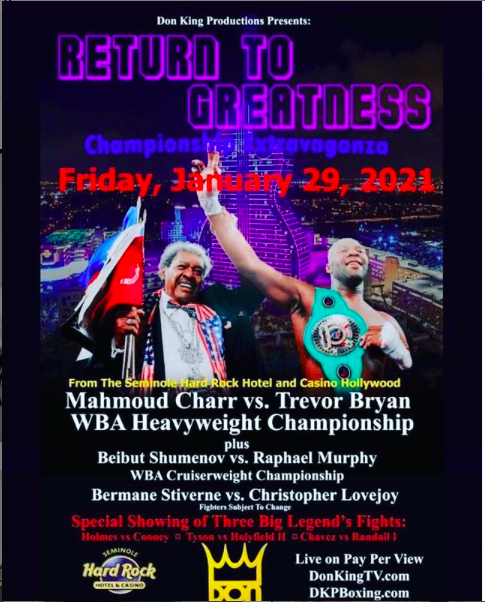 But the posters’ promises and what will actually unfold in Florida, well, that very much remains to be seen.

Bryan, who has lived for a long spell in Florida, but still identifies with upstate NY, the Albany region, didn’t seem bothered by the uncertainty in the air, though.

“Whoever the hell shows up,” he said, with a chuckle. “Just bring those gloves! And if Mahmoud Charr doesn’t come, we are ready to fight whoever! If Anthony Joshua shows up…If Tyson Fury shows up, I’m ready to fight him!”

Messiah manages Bryan with Stacey McKinley, also Bryan’s head trainer, and he said they are all mentally ready to know who they are fighting at the weigh-in, which is set for 3 PM today (Thursday).

Maybe it will be Stiverne, Bryan said. And what would that fight look like?

“If it is me against Stiverne, it’ll be a good fight. He used to have what I want, and he’d be the man who’s trying to stop me from getting to where I want to go. It’s time for me! I’m “The Dream,” and this will solidify why I am No. 1 in the WBA!”

About that WBA; I took to Twitter, to take them to task. No, it’s not acceptable for that sanctioning body to simply zip their lips, and stay silent in the weeks leading up to this King card, about the status of this fight for their “interim” title. And even when I called them out publicly like that, by the way, I still heard nothing from them. 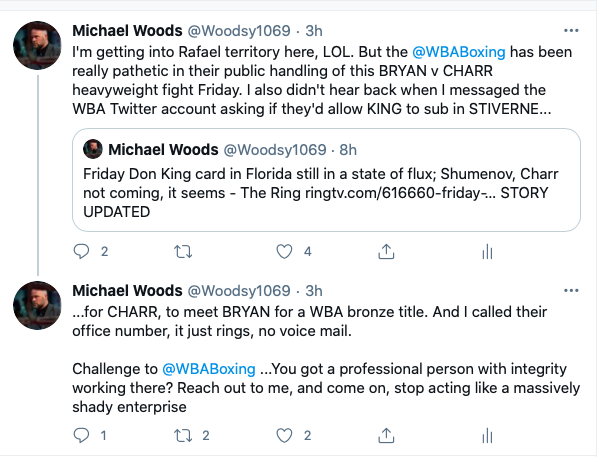 Anyway, that’s kind of neither here nor there, it could be argued, for Trevor Bryan.

I did ask, why so few fights?

“A lotta things could have happened, but I won’t get into the past. On January 29, 2021 at the Hard Rock I will be fighting! It’ll be for that title and next I’m aiming for the two big guys, AJ and Tyson Fury. I’m trying to get those belts back to America where they need to be. And Hollywood, Florida is where it starts!”

For a guy who isn’t doing lots of press, Bryan had solid flow in hyping up his fight. “Yeah, I wanna give a shout out to Albany, NY…they’re about to have another one!”

Plenty of people two weeks ago thought we’d not, that King wouldn’t be able to pull it off. He’s 89, they said, just put him him in the “0” category, he’s not even an “OG,” they said. I think King has enough “G” left in him to get it done, so we will see a card, and Bryan will be able to get in his first fight in two and a half years. Makes sense, from that viewpoint, that he’s not seeming too picky about who he’ll battle.