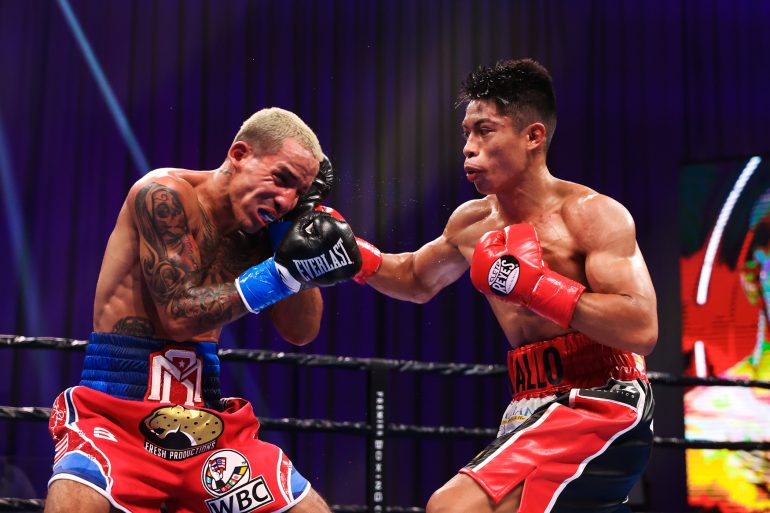 Reymart Gaballo (R) won a controversial split-decision over Emmanuel Rodriguez in December. Would more judges or a 20-point must system help to rid the sport of poor scorecards? Photo by Amanda Westcott/Showtime
26
Jan
by Ryan Songalia

The World Boxing Council, responding to a protest from Emmanuel Rodriguez’s camp, ordered Reymart Gaballo to defend his WBC interim bantamweight title against Rodriguez. Gaballo (24-0, 20 knockouts) had won a disputed decision on December 19 over Rodriguez (19-2, 12 KOs).

Rodriguez, a former IBF bantamweight titleholder from Puerto Rico, filed a formal appeal, hoping to have the decision overturned, but settling for the next best thing, which was a rematch.

Gibbons says the first fight was so bad, there would be no financial interest in a rematch.

“The headline is, ‘Puerto Rican runs, doesn’t want to fight, stinks the house out and then demands rematch.’ You can print that,’” said Gibbons.

“The guy tried to steal a fight, fighting about 20-30 seconds of a round, the other guy came to rumble and give it his all. Rodriguez was an embarrassment to Puerto Rico with that performance.

“That’s what the WBC ordered. Tell the WBC to pay for it.”

The fight, which headlined the final Showtime Championship card of 2020, was slapped together at the last minute after both of the original main eventers, WBC bantamweight titleholder Nordine Oubaali and mandatory challenger Nonito Donaire Jr., fell out due to Covid-19 tests.

The WBC had originally named Oubaali “champion in recess” after his failed test, and designated Donaire against Rodriguez for the full championship. When Donaire also tested positive, Gaballo was moved from the undercard and the new bout was made for the interim belt.

Rodriguez told reporters after the fight that he felt Gaballo only won two or three rounds. Gaballo said it was a “close fight,” and reasoned that his aggression was what earned him the decision.

“Even though I’m coming forward I’m always punching, so maybe they look at me like I won the fight,” said Gaballo the night after the fight.

Gibbons said he would look into options for the rematch, even if it means taking the fight to Gaballo’s backyard.

“Maybe there’s a potential to do the rematch in General Santos City, Philippines if we have to do it. That’s the truth,” said Gibbons. “Even though the fight was so bad and he stunk it up, we’d be happy to bring Rodriguez to the Philippines to do it again.”