Friday Don King card in Florida still in a state of flux; Shumenov, Charr not coming, it seems 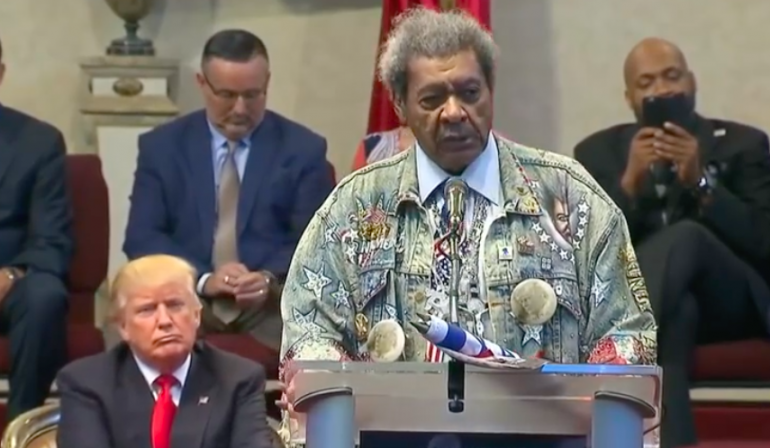 THURSDAY UPDATE: The top of the card is set, it seems like, with Trevor Bryan, the WBA “interim” heavyweight champion, set to take on Bermane Stiverne, at the Hard Rock in Hollywood, Florida on Friday night.

This is set to be the first card run by Don King since 2015, and it will look nothing like the King cards of old. Those things could be eight hours long. This one, BoxRec tells us, consists of four fights.

One interesting note: heavyweight Michael Hunter was approached to glove up on the card. “My people were working on it but looks to be too short of time as far as logistics,” he told RING.

WEDNESDAY AFTERNOON UPDATE: Anyone holding out hope that WBA bronze heavyweight champion Mahmoud Charr will hop on a charter and come from Germany to Florida to fight Trevor Bryan should probably wrap their brain around the fact that Charr isn’t coming.

I spoke to someone in the position to know, who informed me, “I just spoke with Manuel Charr directly, he’s 100 percent not coming, all that news is not correct.”

As with all things boxing, though, the situation might change last minute.

TUESDAY AFTERNOON UPDATE: Bets have been taken, with many folks thinking that Friday Don King card wouldn’t even happen. I’m going to assume it will, until told otherwise. And I haven’t been told otherwise. Indeed, I reached out to the Florida athletic commission, to ask where they stood on that King card.

Can you verify that King card will take place Jan 29, and will be at Hard Rock, I asked of the commission.

“Yes, it is on the schedule,” answered Patrick Cunningham, Executive Director of the Florida State Boxing Commission, part of the Department of Business and Professional Regulation.

The card has been fleshed out, while it’s been hallowed out, it feels like. A 17-1 heavyweight from Ohio, Ronald Johnson, a 35 year old Nevada resident, is listed on BoxRec as being a participant. 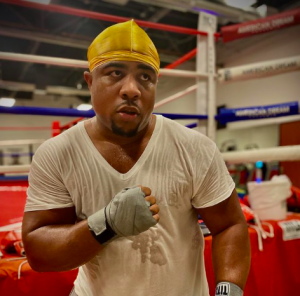 Ronald Johnson is supposed to be fighting Terrell Woods Friday in Florida, according to BoxRec.

DeSshon Webster, a 12-3-3 cruiser from Kansas, is slated to face 8-3 cruiserweight Johnnie Langston, a Florida guy.

Murphy, who comes from a fighting family, his dad Ken Murphy and his uncle Leroy Murphy were longtime pros, told RING that he was informed Shumenov will not be fighting on the Jan. 29 King card in Florida.

Murphy (14-1), part of the Don King mini stable, said he hasn’t been told who he will be fighting.

He hasn’t promoted a full boxing card since 2015, he’s 89 years old, and he’s stubbornly stuck to denim as his fashion choice for 25 years.

But, word is, Don King on Friday will run a show, of sorts, in Florida, getting back on the train that he commanded in the 80s.

Three title fights. Or at least two title fights, featuring some King talent, like Bermane Stiverne and Trevor Bryan, which he’s kept in the fold even as he’s diminished his activity in the space and acted more like a pure broker/agent than true-blue “promoter.” That’s what has been advertised, in the couple releases that have gone out in the last few weeks. 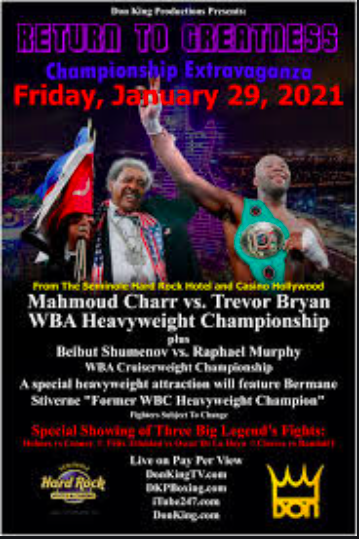 But cards, as any hardcore fan knows, are subject to change. And this one, supposedly to unfold at the Seminole Hard Rock in Hollywood, Florida, never really seemed solidified to begin with.

Here’s what we know. One of the persons advertised from the get go as being part of the PPV show is Raphael Murphy. The 35 year old Texas resident, from a fighting family, flew from Texas to Florida on Sunday. He told RING that he’s looking forward to fighting, and as far as he knows, he will be fighting ex 175 champ Beibut Shumenov. Shumenov, though, has been out, not out and about, the last couple years. He retired because of an eye injury in 2017, and I was told by a solid source, and then ANOTHER source hours later, that Shumenov will not be taking part in the program.

I called the Hard Rock two days ago, and a lady who answered checked, and came back after almost ten minutes, and said that she isn’t aware of any boxing taking place at the venue on Jan. 29. On Monday afternoon, I called the Florida commission, there’s a cell phone number listed on the Association of Boxing Commissions, asking for clarity on whether there’s a show, where it might be, etc. I will insert a reply if one is forthcoming.

Murphy is in a hotel in Florida, and says it feels like there will be a show. Who will be on is a big ole mystery. Mahmoud Charr is advertised, but as of Sunday, indications were that he’d not be coming to the US from Germany, where he lives. But on Monday, media received a release from Team Charr, apparently, which indicates Charr is ready to rumble, and wants to come to the US to fight in Florida. 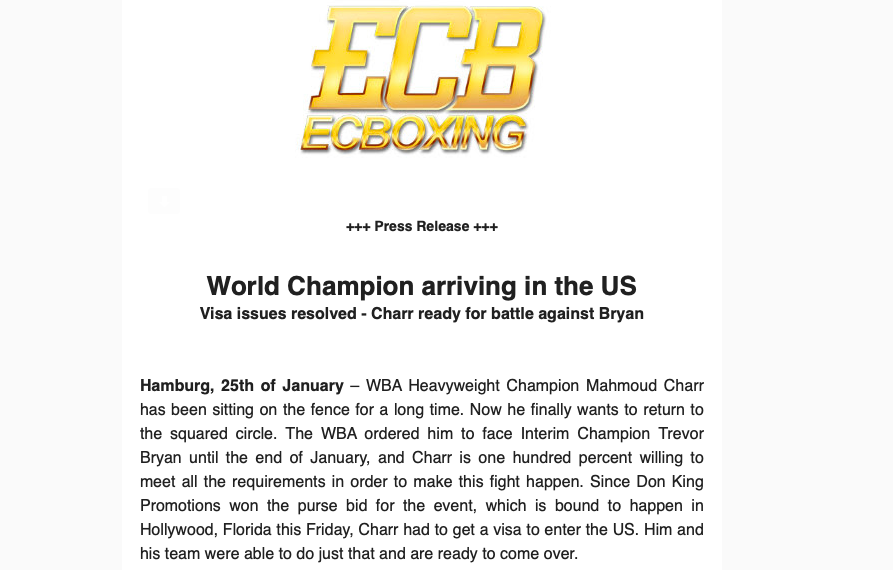 When I responded to that emailed release, and asked, Does he have a visa on hand, I didn’t receive a reply.

I also didn’t hear back when I messaged the WBA Twitter account, asking if the rumor was true, that certain people were looking to put Stiverne in with Trevor Bryan, with the WBA interim heavyweight title up for grabs. Charr has had that on his mantle for years, even as he’s been out of the ring. I didn’t get a response from the WBA.

The poster that’s been floating around, touting a “Return To Greatness,” needs to be updated, because heavyweight Christopher Lovejoy is not fighting Jan. 29 in Florida. He’s fighting Feb. 20th, an NBA intercontinental title, in Tijuana, Mexico.

This mess began when King won promotional rights to a Charr vs. Bryan bout with a $2M purse bid last March. COVID interrupted Don’s flow and it feels like he hasn’t regained his footing. He’s not a free spender with even other peoples’ money, many of his fighters will tell you, and you can imagine the deal if and when he has to reach into his own pocket to do payouts.

That is the case here, I think, because this event is not on a “money” platform, like Showtime.

And if he’s thinking down the line a bit, he’d much rather see Bryan fight Stiverne, because he has contracts with both men, rather than Charr, who isn’t a DKP fighter.

And if the younger gun Bryan were to beat Stiverne, he might be able to force a fight with an Anthony Joshua, or whoever else might hold the WBA “gold” heavyweight strap, for a princely sum. Stay tuned, there’s sure to be more “drama” to come.