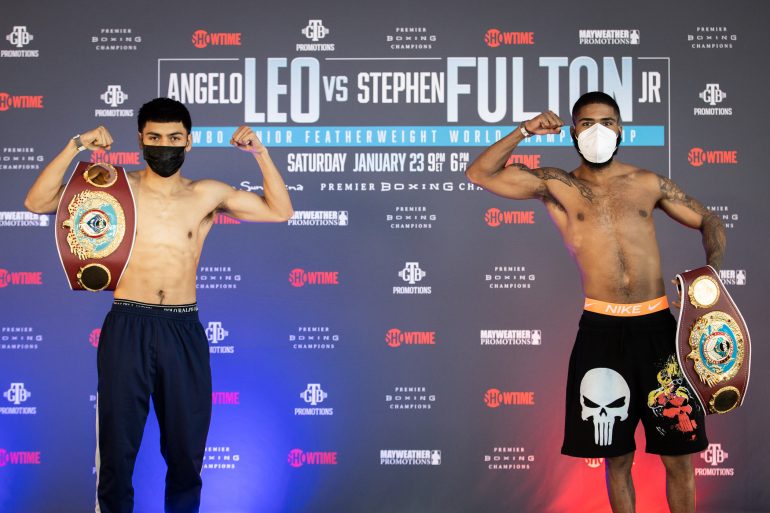 The first Showtime Championship Boxing (9pm ET/6pm PT) telecast of 2021 from the Mohegan Sun Arena, in Uncasville, Connecticut, this Saturday encountered a slight glitch on Friday, when Justin Pauldo exceeded the 135-pound limit by 3.8 pounds.

Avery Sparrow will replace Pauldo in the bout. Romero’s WBA interim lightweight title will not be on the line. Sparrow, who is coming off a 10-round loss to Abraham Nova last June, weighed 136.

“I’m blessed with this opportunity,” Sparrow said. “I was prepared, I was ready. I was focused on the fight. I’m ready to take advantage of the opportunity. I’m in great shape. I was in the gym preparing anyway.

“I am coming off a loss to Abraham Nova, which was very controversial. This is my chance to get it right and I’ll take full opportunity to take advantage. I learned from the Nova fight to not let it get to the scorecards.”

“Fulton’s a good fighter,” Leo said. “He’s got his style down pat. He likes to use his jab and control the distance. You can’t take anything away from him. He was out for a year, so I’m taking advantage of that. My advantages are my pressure, my work rate and my boxing IQ. I think a lot of people underestimate that about me.

“The 122-pound division is stacked with a lot of talent. There’re a lot of fighters who are still undefeated, and I just want to fight the best. This fight against Fulton has taught me a lot already; it’s a huge fight for me. I know that winning this already solidifies my spot. Then, I can focus on who is the next big fight.”

Fulton was supposed to fight Leo back in August for the vacant WBO 122-pound title, but had to pull after contracting COVID-19.

“I don’t think much of Angelo Leo,” Fulton said. “I wasn’t impressed with his last fight. Just pressure. That’s about the only thing he brings. There are things he’s probably never seen before. I come with angles and my ability to punch off angles.

“Not fighting back in August kind of pushed me. It didn’t have a bad effect. It made me push myself to the limit in training just knowing that it was all taken away that first time.

“I would like to get past this and unify. Fights like against Leo and [Luis] Nery are easy fights for me. Their styles and my styles are tailor-made for each other. What they both do fits my style perfectly.”

Note: Romero was originally scheduled to defend his interim lightweight title against Justin Pauldo, who exceeded the 135-pound limit. Avery Sparrow will take Pauldo’s place in the bout. Romero’s title will not be on the line.