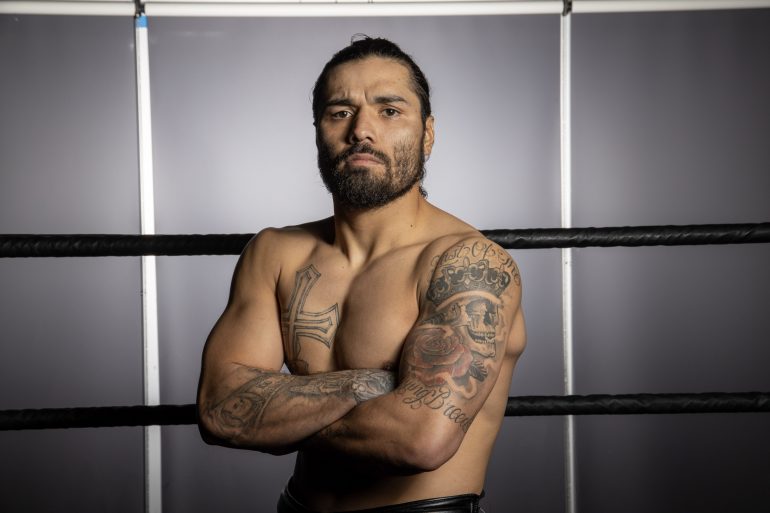 Everything ordinary was cast out of the room, except for the wall-vibrating angry words and the sobs. Victor Pasillas and his fiancé, Jasmine, were at it again about the old devil that had haunted him. Spittle flew from their mouths as they yelled at each other in the dimly lit kitchen.

Hell, you could hear them blocks away.

Piercing the torrent was the small hand of a diapered sage tugging at Victor’s fingers and tiny, pleading eyes staring up at him. It caught Victor by surprise. His face turned porcelain white. His lower lip quivered.

Pasillas was unsure the first time he heard it.

Pasillas’ three-year-old son finally got through to him.

In 2014, no one else did. Pasillas (16-0, 9 knockouts) was a blip on the boxing landscape, someone well known in the Southern California boxing circuit as a talented fighter with a past that shadowed him like death.

The youngest of a drug-addled, drug-dealing mother who was in and out of jail and endured beatings from a cadre of passing men in their lives, Pasillas was a prodigy that almost blew everything by getting hooked on the very drugs he once sold.

On Saturday night, Pasillas, a junior featherweight, gets to take another step toward redemption and away from his smoky, sordid past when he fights Ra’eese Aleem (17-0, 11 knockouts) in a 12-round bout for the interim WBA title on the first Showtime Championship Boxing (9pm ET/6pm PT) telecast of 2021 from the Mohegan Sun Arena, in Uncasville, Connecticut.

Pasillas’ drug use never reached the point where he was a decomposing walking corpse, hanging meat on bones, ready to be nailed into a coffin and swallowed by darkness.

But he came close. 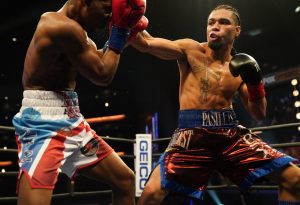 “It’s why I say that I’m very blessed; that I’m very lucky to be alive,” said the 28-year-old southpaw from Redwood City, California. “I’ve been in very bad situations, and a lot of gang violence, getting shot by police. I have had many, many friends who are dead or in jail. I also did a lot of bad things as well.

“In late 2014, I was strung out on drugs. I was a mess. I was going to die. I was taking high-powered stuff that my body couldn’t handle. It messed me up big time.”

What changed everything was one night sitting in the kitchen with his wife and son.

Pasillas’ budding boxing career had stalled. He was the boxing equivalent to a playground basketball legend. Every trainer in LA knew him. His insane amateur record (279-8, 170 KOs) yelled superstar.

He just had one problem—himself.

Drugs were a part of his life ever since he could remember. Rosie Trujillo, his mother, was a pintsized dynamo who was as rough as tree bark. It didn’t matter what neighborhood she was in; she was going to peddle her wares out of little baggies anyway. It led to beatings with clubs and chains in front of her three children countless times.

Her way of life almost led to ending her children’s lives.

In 1995, in “Old Ontario,” California, east of LA, Pasillas vividly recalled the time when he was 4, playing in front of his house with his two siblings.

If not for his German Shepherd pup, Rodan, Pasillas wouldn’t be fighting Saturday night. At first, it sounded like someone was banging on their neighbor’s window when Victor, his brother, Anthony, and sister, Josie, realized that they were gun shots being fired from a car going by.

“Rodan jumped in front of me and I didn’t really know what was happening, until I saw him lying on the ground with blood around him and smoke coming from his mouth and throat,” Pasillas remembered. “If Rodan didn’t do that, I wouldn’t be here today. As a little kid, that was the closest, scariest moment that I came to getting shot. It was the first time I was ever shot at.

“It was weird, but by the time I became a teenager, we used to get shot at all of the time when we would go out to parties, and didn’t think anything of it. We would say, ‘We’re going to war, we’re going to war.’ It was fun. Then, when I was 14, I saw a friend get killed when he was shot in the throat, and he sprouted blood like a water fountain.”

That changed a few things—though not everything. Pasillas wanted to project a hard image like his older relatives. Rosie was a 4-foot-8 spool of barbed wire, who barely weighed a 100 pounds. She defied everyone. She was constantly on the run from police, and when they couldn’t nab her, gun-toting, chain-wielding gangsters did.

Pasillas lost track of the times the door was smashed in wherever they were living at the time and gangs would pound on Rosie until she was a purplish, swollen lump.

When that didn’t occur, Rosie would get lost in a hazy coma of heroin.

“There were a lot of times that Josie would have to come up and wipe my ass as a little kid, because I was on the toilet for three hours, because my mom was strung out on heroin,” Pasillas said. “I was left screaming. Anthony and Josie weren’t much older than me, and they were like my parents.

“I remember Anthony being an angry little kid all of the time, even when he was 7 years old. My mom would sit there crying and I would wonder why. She was a big-time drug dealer, crying because she didn’t have any money to buy drugs.”

Victor wanted to be an adult presence in her life, so he began doing what she did. He drank his first beer when he was 4, throwing down cans of Budweiser with his mother.

“That was every-day life,” he said.

Boxing came and went. He would be committed, then he wouldn’t be. Trainers saw the raw talent, and explosive way he attacked a punching bag. He had amazing strength for someone his size. The lure of the streets, however, appeared more prominent.

That was the reality that Pasillas constantly skirted.

“About 14, it’s when I learned how to sell cocaine and crystal meth, but I never did it, and I never did any needles,” Pasillas said. “There was a time in my life, and I’m very embarrassed to say this, but for six months, when I was a pro, I was hooked on heavy drugs.

Close friends, like trainer Brian Schwartz, and Pasillas’ cutman, James Michael Bazzel, saw him in 2014 and could tell something was wrong. Pasillas’ eyes were half-mast, blackened and bloated.

“It was a bad time; I wasn’t getting any fights and I remember getting into it with my wife all of the time,” Victor recalled.  “I wasn’t where I needed to be in my career. One time, after arguing with Jasmine, I walked downstairs where we were living and this guy, younger than I was, says to me, ‘I have something that can make all of that go away.’ He heard us screaming and I was like, ‘Damn, I used to sell that.’ He told me it was good and I should try it.”

A large vacuum was getting bigger, pulling Pasillas further away from his family.

“Jasmine finally had it with me (in Oct. 2014). She sat me down, and my son was with us, who was only 3 at the time, and I remember telling her, ‘I don’t even know what I’m doing and I don’t know how I’m going to stop,’ because I knew I had a problem,” Pasillas said. “We were arguing again, and I’ll never forget my son grabbing my hand and yelling at me, “Stop Daddy! You just gotta stop!’

“Thinking back, I even have a tough time talking about that now (a crack of emotion in his voice). That changed everything. Looking at my son, I was going in the same route as my mother. That shook me up. Jasmine and my son were starving, and she was breast feeding my daughter at the time.

Victor got up, walked across the street barefoot to the gym where he was working out of in the San Fernando Valley, grabbed his trainer at the time and told him he had to leave. In early 2015, the family placed all of their belongings in storage and Jasmine left to live with her family for a month while Victor dried out.

He took a Greyhound bus up to San Jose, where Schwartz picked him up.

“Because of how and where Victor grew up, he always believed someone was out to get him, so it took him a long time to trust people,” Schwartz said. “Victor will be the first to admit he blew the Top Rank deal. Victor is a very strong man, and he’s gone through a lot of things in his life. In 2014, I remember him coming to training late and you could tell something was going on.

“He was constantly late and my time is precious. I trained other fighters, and if Victor was late, that took time away from my other clients. Guys came in to spar and they would leave, because they were tired of waiting for Victor. When I confronted him about it, Victor said something back, and I blew it.”

Schwartz told him to grab his stuff and go home.

Pasillas was left in tears. Schwartz consoled him in the locker room and Pasillas agreed he would be more respectful of Schwartz’s time. Three years ago, Pasillas found manager Greg Hannley, of Prince Ranch Boxing, who is responsible for Pasillas’ comeback. Aiding Pasillas’ transformation was putting Southern California in his rearview mirror and moving to Redwood City.

“Victor needed a change of scenery and he needed to realize just how talented he is,” Schwartz said. “After the one big blow up we had, that was it. If he’s late for training, he’ll call to let me know. He was able to get away with so much early in his career because he’s so talented, but after you do things like miss weigh-ins and people lose track of where you are, problems begin.

“Victor needed to find trust—and he has. He’s like a completely different person than who he was six years ago. Victor has his own business, he has a whole clientele, and he’s in a really good place in his life right now.”

Taking on Aleem will be rather easy, Pasillas says. 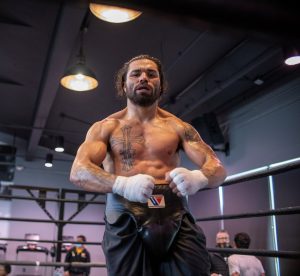 “I beat the devil, so anything after that should be easy,” he stressed. “When I sit back and I think about the things I appreciate the most, I appreciate life. I see my wife and my kids and where I am today, and I’m doing something I love to do—like boxing.

“There is something about doing something you love to do. I may have gone through the valleys, and the dark roads, and a lot of dark places to get here, but I’m here. I’m fighting on national TV in the first big fight in 2021. I shouldn’t be alive. That past anger never leaves you.

“I needed to take it with me and turn that negative energy into a positive. It was God telling me I wasn’t ready to be great yet. I embrace my past all of the time. My hard moments made me.”