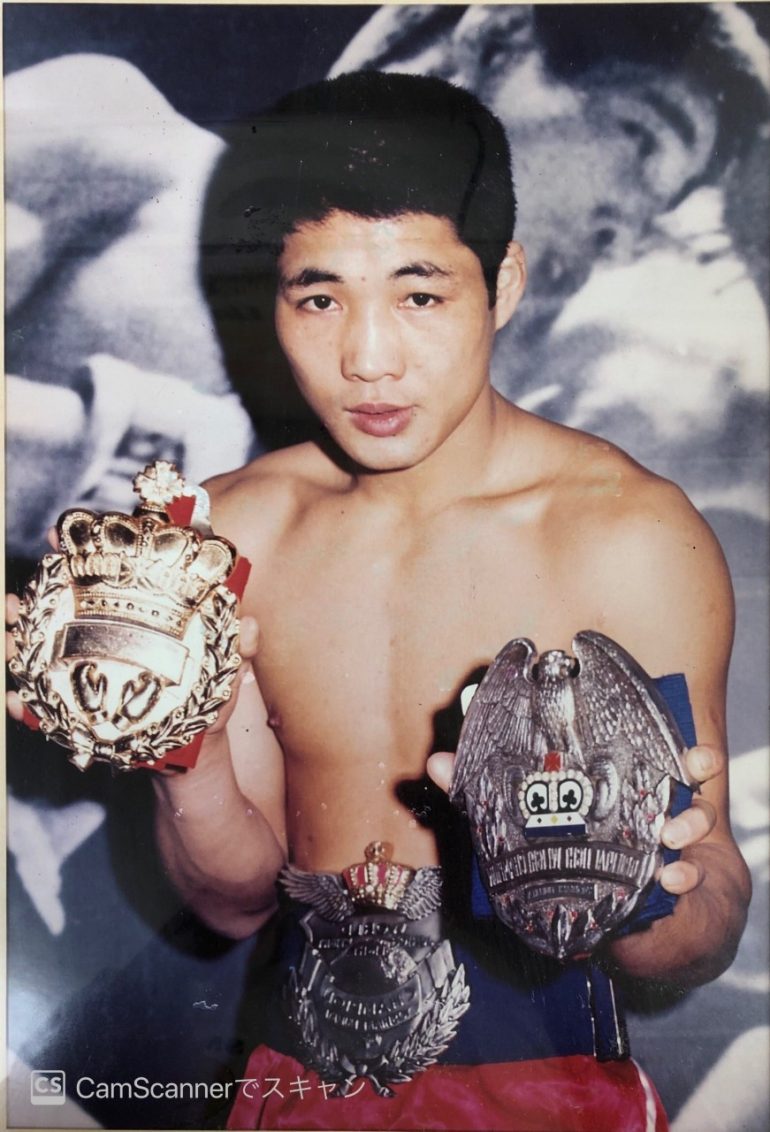 Yoshiaki Numata made up for his lack of physical gifts and power by combining a smart boxing brain and impressive skills to become a two-time junior lightweight titleholder.

Numata was born in Monbetsu, Hokkaido in the north of Japan on April 19, 1945. He was the third born of four children. The family endured a difficult loss early in their lives.

“My mother passed away when I was 3 years old,” Numata told The Ring through Hank Hakoda. “I lived with my father and sisters and my brother needed to be raised by relatives for family reasons.

“My father was a Whitesmith who ran a tin plate business, dealing with tin roofs, bicycles and other customer demands. My father is such a down-to-earth [person] and never received money from me even after I became a champ.”

While Numata was in kindergarten he earned extra money working on a farm where he did several jobs, which he attributes to building his physical strength. He enjoyed playing baseball and was a hardworking student.

When Numata was 16, he watched boxing at a friend’s house and things quickly escalated when unbeknown to him his friend sent off an application to take up boxing.

“To take the exam, it took me two-and-a-half hours in a snowstorm to travel all the way to Sapporo,” he explained. “There were university professors there, who performed detailed physical checks on us based on scientific approach in addition to a written test.

“The manager picked me out in 10 minutes out of 100 candidates. I was eventually selected as the top boxer out of 7,200 applicants from all over Japan.”

Despite his father initially being opposed to boxing, he eventually won him over.

With no amateur experience, Numata made his debut as a 17-year-old in July 1962. He was extremely busy over the next couple of years.

“I followed what was decided and prepared by my manager,” he said. “I was a busy fighter in my early career; five bouts in about 5 months for the first year, and 10 for the second year including two in the same month. In those days Japanese boxers fought a lot, and even champions were supposed to fight non-title outings to keep up with high demand from the TV station that routinely featured boxing.”

In 1964, he gained invaluable experience as a sparring partner for American Eddie Perkins, who was in Japan to defend his WBA/WBC lightweight titles against Yoshinori Takahashi.

“During my sparring session with him, he showed me a unique boxing style that thrilled me a lot,” he said. “His ‘Philly shell’ very relaxed fighting style; low guard, shoulder rolls and blocks, flexible use of every joint and speedy flicking jabs opened a big door for me.

“I thought, ‘Yes, this is exactly what I should add to my boxing arsenal.’ I was dedicated in the gym to keep practicing again and again in the mirror to copy his motion and actually lead me to another level.”

Numata was able to upset Flash Elorde to win the OPBF lightweight title in June 1966. A year later he repeated the victory by 15-round majority decision to become The Ring/ WBA and WBC junior lightweight champion.

“I am proud of my two victories against the legendary fighter,” said the humble Numata. “I would say I was lucky. I was on a rise to reach at my peak of my career whereas he was past his prime. Nevertheless, Elorde was still a very good fighter, making full use of his experience.”

Numata would lose his titles in his first defense against Hiroshi Kobayashi in December 1967.

“Everybody was excited to watch the first world title showdown between Japanese fighters in history,” said Numata, who was stopped in Round 12. “My manager and Kobayashi’s furiously berating each other during the public press gathering.

“Kobayashi fought wisely, his sneaky skills made up for his lack of one punch power. He never let me throw my favorite punches, keeping his distance and timing, which allowed him to take control of the entire bout.”

Numata wanted a rematch and was confident of gaining revenge. Japanese boxing fans wanted to see it but the politics and discord between the two camps prevented it happening.

Numata made a bold attempt at Mando Ramos WBA/WBC lightweight titles in October 1969.

“I was highly motivated to fight Ramos to become a two-division champ in Los Angeles,” he explained. “He was too big and powerful for me to take. He was unexpectedly skillful with remarkable jabs and defense.”

The defeat prompted him to drop back down to 130 pounds where he challenged WBC titleholder Rene Barrientos.

“I stayed focused on saving my pride no matter what,” said Numata, who edged matters by 15-round split decision. “Barrientos was a tall, elusive champion. I fought him with total confidence from the beginning to the end, as I was good against southpaws and ready for whatever he brought.”

“I retained my belt against prominent challengers who were former or future world champs,” he said. “I scored a sensational KO victory over Raul Rojas with my big right uppercut to his jaw.

“Lionel Rose was a difficult fighter, but I felt his style was somewhat similar to mine.”

Numata yielded his title to Mexican Ricardo Arredondo, who stopped him in 10-rounds. He fought once more and was stopped by unheralded Kenji Iwata.

“I knew I was at the end of my career before my final bout,” said Numata, who retired with a record of (44-8-3, 12 knockouts). “My prime was when I was 22 or 23 years old. In my peak, I could predict what my opponent was watching and thinking of.

“I quit boxing when I was 26. I wanted to comeback as time went by, but the manager did not accept my idea on how I would train and fight. That was when I decided to call it quits, and then I permanently hung up my gloves to end my 10-year career.”

Looking back, Numata feels he made the most of his career despite his frail physique.

“Unfortunately, I didn’t have a strong chin or body to take world-class punches (Numata was knocked down 22 times in his career),” he explained. “I didn’t have a flexible body and joints to move smoothly. My priority was to get hit as little as possible. I had to use timely offense and defense.”

Numata, now 75, lives in Kiyose, a city within Tokyo, where he runs a gym. He is no long married but maintains a close relationship with his ex-wife, he has one daughter and one granddaughter.

“It was so long ago when I was a world champ and people walking on the street never know who I am,” he said. “When people tell me how famous I used to be, I do not really get it.

“Having been through my boxing career, now I just appreciate this peaceful life that I have. I am still in good health and I do not have to rely on others. This is a wonderful thing that I cherish. I do not have any friends who are in the boxing business. I might be a strange former champ [Laugh].”

Mando Ramos: He knew how to use the jab effectively. Kang Il Suh and Hiroshi Kobayashi are also the candidates for this category. They all applied remarkable jabs strategically and produced unpredictable timing.

Ramos: It would be Ramos for his great positioning that kept me out of my reach. Other strong candidates are Hiroshi Kobayashi and Kang Il Suh. They all had a great defense that confused me.

Hiroshi Kobayashi: Kobayashi’s jabs were different from others. I believe my hand speed was faster than any of my opponents.

Kobayashi: He fought me very elusively, but I could have dealt with him a lot better in the rematch. No one ever could do it better than me if I used my footwork to cut off the ring. I could have out-boxed all my opponents if I fought in long range. However, my manager regrettably did not want me to apply such a fighting style, making use of my main asset.

Kobayashi: Kobayashi deserves this category because of his tactical skills, which greatly eliminated the opponent’s strengths. Elorde could also be a candidate, but he was not in his prime and his overall fighting instincts were not big threats when we fought. Kang Il Suh was not a big puncher, but he fought me with an unpredictable timing, which confused and prevented me from fighting him effectively.

Love Allotey: He was a fierce opponent and obviously the strongest in terms of physical power, applying constant high pressure as well as bodywork.

Ramos: Mando Ramos deserves this category although it was mainly because of his physical advantage in the lightweight division. I also remember my countryman Hidemori Tsujimoto had a great chin that endured my perfect uppercuts.

Love Allotey: He hit me harder than any other fighters. Both of his hands were so strong. His devastating hook sent me to the canvas and completely blew my memory away. I do not even remember if the finishing blow was a right or left hand. When I found myself after the encounter, I was at a dressing room and I was like, ‘Why am I here?’ I gradually remembered what happened to me. My chin and body were naturally weak. This fight made me realize that I had to box without getting hit in order to win a world title. I never lost that way.

Hiroshi Kobayashi: He had excellent overall skills that minimized my offense. I could barely pick up the pace and keep up with his movement. The fight regrettably ended before I adjusted myself to the distance and timing he strategically made.

Flash Elorde: Elorde was still a very good all-round fighter although he was past his prime, making full use of his of world class experience. He was amazing at tactics, tricks and other implicit skills based on his great gamesmanship. It was not easy to measure how much he got damaged. He never showed his mind on his face even after taking my good punches, and I was unsure if my punches were working. I was perplexed that he sneakily pretended to attack me.