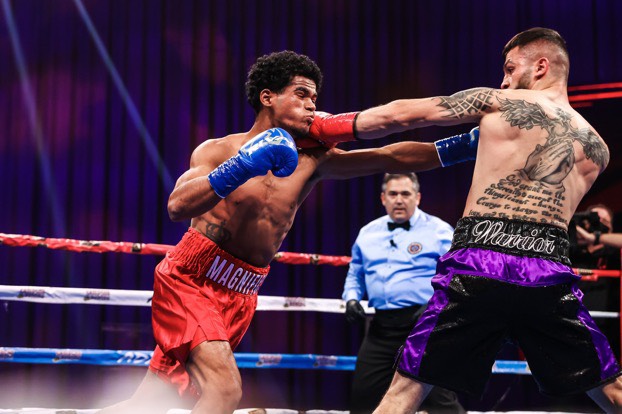 Featherweights Jose Nunez and Aram Avagyan fought to a majority draw Wednesday at the Mohegan Sun Casino in Uncasville, Connecticut. One judge edged it for Nunez, 77-75, but was overruled by the other two judges who scored the fight 76-76.

The scoring really came down to what you preferred: the movement and body punching of Nunez, or the accuracy and counterpunching of Avagyan.

Nunez (11-0-2, 4 knockouts) was the busier fighter throughout. After settling in and finding his rhythm, he found success working the body. The 22-year-old Panamanian native, fighting in America for the first time, utilized lateral movement and angles to keep his opponent off balance. His trainer could not make the trip to the United States, so Freddy Fundora (father of junior middleweight prospect Sebastian Fundora) worked his corner.

Avagyan (10-0-2, 4 KOs), who had been dropped in his previous two fights, defended well by covering up and slipping shots. The Armenian native, who now lives in Glendale, California, applied steady pressure. After a slow start, Avagyan began putting his punches together in the middle rounds. His experience began to show. Avagyan had over 300 amateur fights (compared to just 33 for Nunez) and represented his native Armenia in the 2016 Rio Olympics.

It felt like Nunez had outworked Avagyan in the first half of the bout. However, by the eighth and final round, the Armenian had narrowed the gap. Fundora implored Nunez to finish strong. There was good two-way action down the stretch and the result of the fight was in doubt as the final bell rang.

The fight opened a ShoBox double header broadcast on Showtime. 2021 marks the twentieth year of the series, known for developing numerous prospects into world champions over the years.