Imagine the surprise if you were looking for a good show to stream, poked around, saw that “One Night in Miami” got raves on Rotten Tomatoes, tried it, dug, and then saw when “Cassius Clay” was in the ring with “Henry Cooper,” that you recognized the “actor” playing the British heavyweight.

Your eyes didn’t deceive you, that IS ex fighter Sean Monaghan as Henry Cooper, and winging wide hooks at Cassius Clay.

The former light heavyweight contender, who holds a 29-3 mark, is 39 years old. After a March 9, 2019 stoppage loss to Callum Johnson, he exited the stage, and stopped campaigning as a professional prize-fighter. It was Gerry Cooney, in fact, that yanked him back into the fistic space, of sorts. 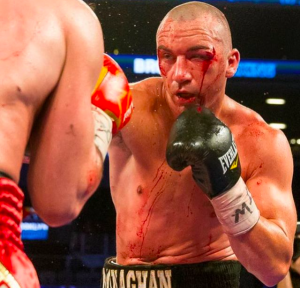 Seanie has thought about coming back to the ring, but the death of Patrick Day stays in his head, and keeps him sidelined. Also, his wife wouldn’t give the A-OK.

Cooney, a fellow Long Islander with roots doing back to Ireland, put Sean in touch with a guy named Robert Sale, the same man who cast John Duddy in the 2016 “Hands of Stone” Roberto Duran movie, and is listed as “boxing coach” for ONIM, according to IMDB.

“We filmed down in New Orleans last February right before coronavirus hit,” Monaghan reported. “I was there rehearsing the routine with Eli Goree, the actor who plays Ali, the stunt director Larnell Stovall, and the actor who played Sonny Liston, Aaron Alexander, stayed on after he finished his scene to assist the stunt coordinator. We did three days of practice in a gym till we got the whole routine down and then we filmed for three days in a big warehouse down by the river in New Orleans. I shared a dressing room with Michael Imperioli, who was Christopher in The Sopranos, which was really cool.”

The flick is a drama showing a meeting between Malcolm X, Cassius Clay, Jim Brown, and Sam Cooke in Miami after Clay first triumph over Sonny Liston, the night of Feb. 25, 1964. Regina King directed, from a based-on-true-events screenplay by Kemp Powers, based on his stage play. It was released in some theaters by Amazon Studios on December 25, 2020 and went to Prime Video on January 15, 2021, and goes deep into what those Black icons chatted about. Big ideas and feelings were in the air–the night of Friday, March 6, it was revealed on a radio show by Black Muslims leader Elijah Muhammad that Cassius Clay was no more, the fighter, now clearly not merely an athlete, but a real-deal activist, was to be identified as “Muhammad Ali.”

To my eye and mind, the production scored when they had Sean Monaghan as Henry Cooper fighting Clay, in this way. He’s common sense smart/pragmatic, same as Cooper was when he was asked what he thought about Clay in the lead-up hammering him as bum. “He’s building up the gate, and I’m on a percentage just like ‘e is,” responded Sir Henry, who had another crack at Clay/Ali in ’65, and again got stopped, one round later this time.

On June 18, 1963, Clay fought Henry Cooper at Wembley Stadium in London; viewers will see Monaghan, playing Cooper, dumbing down his form to throw launches that would look good on camera. 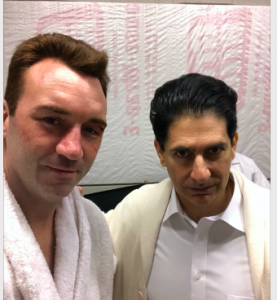 Henry Cooper poses with Angelo Dundee during the filming of “One Night in Miami.”

“It took some getting used to,” Monaghan said. “They wanted big huge wide punches that missed by a mile! Said it looked ‘better on camera.’ I’ve thrown a few haymakers in my day but I was actually struggling to throw such ugly punches. All the training over the years was to do the exact opposite of that.

“It’s funny, when we started practicing, I was throwing sharp punches at the Ali actor, missing by a little bit and they were like, ‘whoah, whoah, take it easy! Too close!’ I was like, ‘I’m not gonna hit this guy!’ No joke, they wanted me to miss by like two feet! I kept thinking, ‘this is gonna look so stupid!’ But with the camera at the right angle, it works!”

It works when Imperioli, as Angelo Dundee, exasperated with a wisecraking Clay and Bundini Brown after round one, says, “Will you both shut the f-ck up?”

Sean gave more inside lowdown on his experience. “The stunt coordinator guy was cool but I struggled to keep my mouth shut, honestly. I had to memorize a “combination” and it was like jab, jab, left hook, jab, left hook, left hook. I was like, does this guy not have a right hand?! He said, ‘don’t worry, it’ll look cool!’ We also had a disagreement over dinner, he tried to tell me 130-pound Bruce Lee would’ve easily beaten Mike Tyson in a street fight!” They agreed to disagree.

I would have been over the moon if Seanie had some lines, and gave us his impression of ‘enry, but alas, no, his hands are featured and his vocal talents were not utilized. What if I tuned in, not having known they cast Sean Monaghan as Henry Cooper, and he said something like, “I’m going to shut your mouth, you rambunctious American blow-hard” at Ali in an English accent? Maybe in the sequel….

More takeaways from the fighter who worked with trainer Joe Higgins, and promoters Lou DiBella and then Top Rank as a pro from 2010-2019. “Regina King was cool as hell and really hot in person,” he told me. “New Orleans is cool, too, that was my first time down there.” 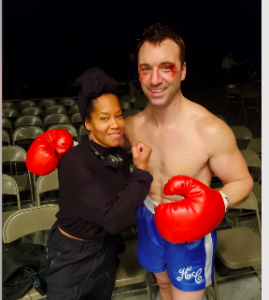 Actress/director King puts up her duke after ex fighter/actor Monaghan turned in an Oscar-worthy showing during the filming of “One Night in Miami.”

It was helpful that Seanie didn’t have to dig in to homework to get to know his character, or motivation, or the premise and intent of message of the movie. “I know everything about Ali,” he said. “I also studied and knew the whole fight almost punch for punch, the movie mixed it up a bit but that’s what they do in Hollywood, I guess. It wasn’t a boxing film, it’s a civil rights movie.”

We discussed the timeliness of “One Night,” and he didn’t disagree when I suggested the movie is timely now, more than we would have thought, what with it being apparent that America has more of a race divide issue than some would have assumed.

And I had to know, did playing Cooper inject a new bug into Monaghan, the acting bug? He laughed. “Not really bro, it was cool and I’d do it again if they offered but I wouldn’t say I loved it! I don’t wanna complain but I don’t even watch movies anymore. All I do is read books and try to stay disconnected from everything that’s going on.”

Here’s maybe a more crucial question. Did getting back into the ring get Monaghan back into “that” mode, have him thinking maybe he wanted to give it one more shot? (Click here to learn what his mindset was after he lost to Johnson last March.)

“Nah bro, I considered it a few times,” Seanie told me. “Mentally, I’ve improved a lot, I still spar from time to time and I swear I’m better than ever. Even when I watch my old fights I’m like, ‘Oh my God I was so rough around the edges!’ There’s a lot that I know now that I wish I knew then. But honestly once Pat Day passed away that completely closed the book for me.”

OK, so then the door is open, right, I cracked to him.

He howled. “I could never make 175 again either and the next weight is twenty five pounds up,” Monaghan said.