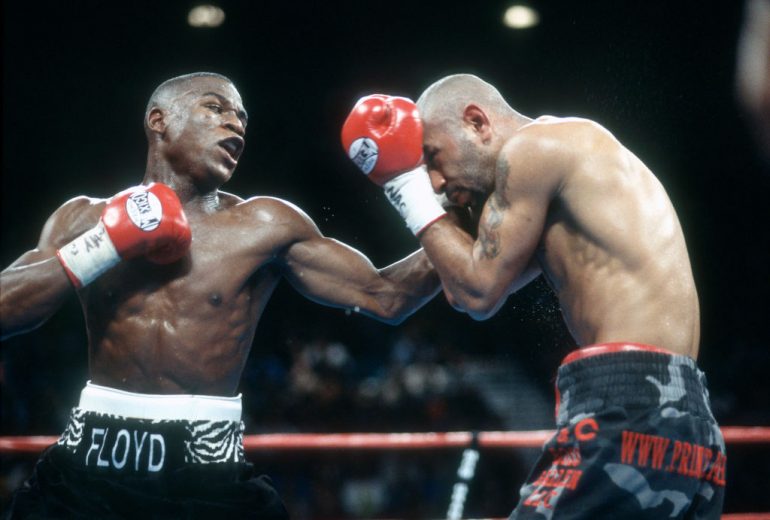 Two decades. Has it really been that long? Given that Floyd Mayweather remains the biggest name in boxing in 2021 –  despite being retired – it’s remarkable that what was arguably the finest performance of the self-proclaimed TBE’s career took place at the MGM Grand in Las Vegas on January 20, 2001.

Before “Money” became the moniker, before his bromance with 50 Cent, before he owned his first Bugatti, before he put safety over savagery in the prize ring, Mayweather was an unbeaten 130-pound fighting machine known as “Pretty Boy.”

Already established as a pound-for-pound player thanks to stoppage wins over Genaro Hernandez; from whom he claimed the WBC junior lightweight title, and Angel Manfredy; who he battered inside two rounds, the Grand Rapids star was still viewed by many critics as untested.

Corrales was a 5-foot-10 ½ junior lightweight with crunching power in both hands. In October 1999, the Sacramento native scored a devastating seventh-round stoppage over Robert Garcia (future Trainer of the Year and brother of Mikey) to win the IBF title, and he maintained his dominance in successful defenses against John Brown (UD 12), Derrick Gainer (TKO 3), Justin Juuko (KO 10) and Manfredy (TKO 3).

Enormous for the weight, Corrales (33-0, 27 KOs) targeted the lightweight division, but he made it clear upon his departure that he would return to 130 pounds one more time for a showdown with Mayweather. Whether Corrales said that on the spur of the moment, or whether it was a genuine attempt to lure Mayweather into a fight, he ended up committed when his rival accepted the challenge.

The rest is history. 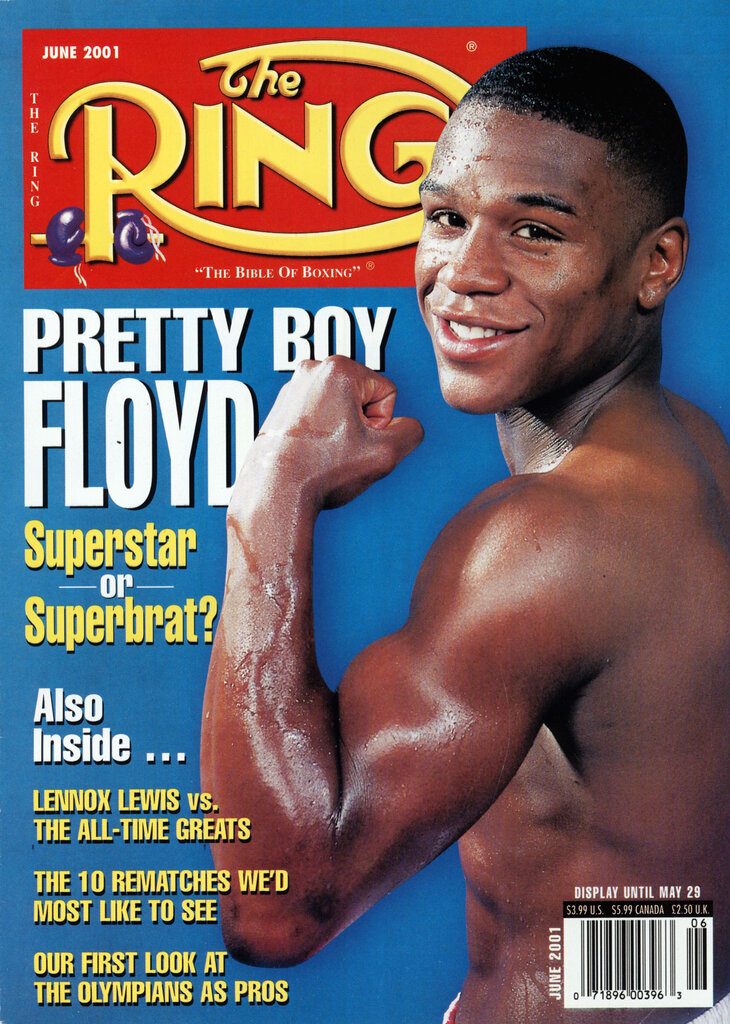 It might come as a surprise to those who weren’t following the sport 20 years ago but coming into this fight the media was split on the outcome. The Mayweather-Corrales bout was unapologetically promoted as a junior lightweight version of the legendary welterweight “Showdown” between Sugar Ray Leonard and Thomas Hearns from 1981. Like Leonard, Mayweather was the superlative boxer who could punch and Corrales, like Hearns, was the devastating knockout artist who could box.

On fight night, Corrales, according to HBO’s unofficial scales, had put on 16 pounds since making 130 the day before. Chico claimed that making weight had been “hard,” but that was probably the understatement of a lifetime. Mayweather added just six pounds, but he was loaded with confidence when he entered the ring.

The first round was one-sided in Mayweather’s favor. The jab to body and head was solid, the left hook was felt but not seen, and accurate right hands put the habitually offensive Corrales on the backfoot. Since switching head trainer from his father, Floyd Sr., to Uncle Roger, a former two-weight world titleholder, Mayweather had began mixing more offense with defense, but this was the first time that the styles had blended together perfectly.

Corrales looked bewildered as early as Round 2. A thumping left hook, a shot which would work wonders throughout, crashed into Chico’s face and Mayweather escaped unscathed. Combinations were introduced in the third and every shot shuddered through Corrales’ lanky frame. Through the first half of the bout, Mayweather landed what he wanted, when he wanted, where he wanted. Another blazing left hook struck the target in Round 6 and when Corrales attempted to return fire, the target was gone.

It was the left hook again, two of them, that produced the first knockdown seconds into Round 7. Mayweather pushed off his back foot to close the gap and, once again, Corrales seen nothing. The second knockdown was perfection. Mayweather jabbed to the body and instantly noticed that Corrales dropped his right hand in response. A moment later Floyd feinted the jab to the body, Corrales dutifully dropped his right hand again, and Mayweather turned over a compact left hook to the jaw that sent his opponent spinning to the canvas. A third knockdown in the round didn’t have the same aesthetic as the prior two – Corrales was bundled over by a furious barrage of lefts and rights – but it was equally punishing.

“As much as it was a disadvantage for Corrales to have come down to 130, it doesn’t look, the way this fight has gone, that it would make a difference if it was at 135 or 140,” offered HBO commentator Larry Merchant. That analysis was as accurate as Mayweather’s punches. “I’ve not seen an exhibition of boxing like this since Willie Pep,” stated HBO’s unofficial scorer, Harold Lederman. These comments might seem like hyperbole, but Mayweather looked that good.

In the ninth, Floyd led with a right hand, hit the target, and, like he had done countless times, drifted out of danger. Corrales shook his head in despair. When his corner berated him between rounds, the challenger was as honest as he could possibly be: “I’m giving you guys all I got!”

By Round 10, the accumulative effect of Mayweather’s punches had caught up with Corrales. Another invisible left hook, almost gentle in its delivery, put him on his knees and the end was near. A warrior to the core, Corrales rose, told referee Richard Steele he was okay and marched forward to meet his fate. A brace of sharp rights put him down again and forced Corrales’ co-trainer and stepfather, Ray Woods, to throw in the towel. Corrales was incredulous at being stopped on his feet, but it was unquestionably the correct decision. The official time was 2:19.

Mayweather’s performance was viewed as masterful and it has maintained a timeless quality as the years have passed. Twelve years later, as a veteran, he would box beautifully against Canelo Alvarez, but he was more offensively dynamic against Chico. Floyd’s 25th win, in a career that would see him notch 50 straight, was, for many, his finest ever display. From my viewpoint, it was the performance of the decade and that’s saying something given that Bernard Hopkins TKO 12 Felix Trinidad, Winky Wright UD 12 Felix Trinidad (sorry Tito), Manny Pacquiao TKO 11 Marco Antonio Barrera and Joe Calzaghe UD 12 Jeff Lacy, among others, have to be considered.

Corrales would go on to establish himself as a truly great fighter in his own right. Wins over Joel Casamayor and Acelino Frietas set up a bout against Mexico’s Jose Luis Castillo on May 7, 2005 at the Mandalay Events Centre in Las Vegas. The ensuing battle, which saw Corrales rise from two 10th-round knockdowns to score a stoppage in the very same session, is fondly remembered by fans as one of the greatest fights in boxing history. It was also the final time that Corrales’ hand would be raised. In a tragic coincidence, Chico was killed in a motorcycle accident two years to the day from his greatest ever triumph.