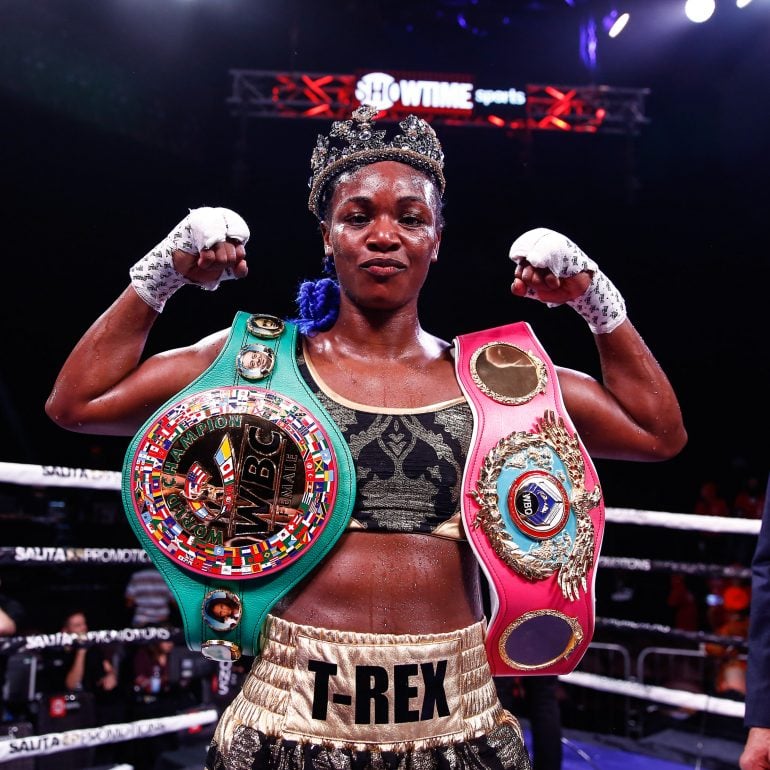 Claressa Shields will face Marie-Eve Dicaire in a clash of unbeaten world titleholders on March 5, it was announced Tuesday.

The 10-round bout will take place at the Dort Federal Event Center in Shields’ hometown of Flint, Michigan and will headline a live all-female pay-per-view stream on FITE.TV ($29.92, 9 p.m. ET/ 6 p.m. PT).

The clash between Shields and Dicaire will pit the No. 1 and No. 2-ranked fighters at 154 pounds, respectively. Diego Morilla, member of The Ring women’s ratings panel, confirmed both fighters will vie for the vacant Ring Magazine championship.

“As per our Ratings Policy, the winner of a fight between our No. 1 Claressa Shields and No. 2 Marie-Eve Dicaire will be awarded the very first Ring magazine championship belt in the history of the women’s junior middleweight division,” said Morilla. “And if Shields wins the fight, she will also become The Ring’s first-ever two-division champion.”

Both Shields and Dicaire, who holds the IBF title, will be fighting for the vacant WBA title at 154 pounds.

The 25-year-old is attempting to become the first fighter, male or female, to win an undisputed championship in two different weight classes. Shields became the undisputed champion at 160 pounds by defeating Germany’s Christina Hammer in April 2019. With the win, Shields also won the Ring Magazine championship.

Shields has made news in recent weeks by signing a deal with the Professional Fighters League (PFL) in an attempt to win a world title in mixed martial arts (MMA). She has been recently training with former two-time UFC light heavyweight champion Jon Jones.

Transitioning back to boxing, Shields is confident she can unify all belts on March 5 at the expense of Dicaire.

“I’m excited to be fighting another undefeated champion and to have the opportunity to make history by becoming the first fighter, male or fame, to be an undisputed champion in two weight classes in the four-belt era,” said Shields, who is managed by Mark Taffet.

“Headlining my first pay-per-view event with this historic all-woman’s card, particularly at such an important time in the evolution of women’s boxing and around the International Women’s Day celebration, is so meaningful to me. We’re going to put on one heck of a show for the world to see. It’s one big step for boxing and one giant step for Womankind. I can’t wait to fight Marie-Eve Dicaire on March 5.”

“Claressa will be fighting the toughest fight of her career,” said Salita. “As she strives to once again make history and do what no man or woman has done in boxing against undefeated IBF world champion Marie Dicaire by winning a second undisputed world title. I am thrilled to be the promoter of her first PPV main event on the important weekend of International Women’s Day. March 5 is going to be a ‘Herstoric’ night, inside and outside the ring, from the Dort Financial Center in Claressa’s hometown of Flint, Michigan.”

Dicaire (17-0), who resides in the Montreal, Canada suburb of St-Eustache, defeated Ogleidis Suarez of Venezuela by unanimous decision in her last bout in November 2019. The victory over Suarez was Dicaire’s third defense of the IBF title she won in December 2018 by defeating Chris Namus.

The 34-year-old will be a huge underdog, but she believes her experience and ring I.Q. will be enough to outlast Shields.

“I’m happy to finally be able to get back in the ring and face Claressa Shields,” said Dicaire, who is promoted by Yvon Michel. “It’s been a year now that I’ve been preparing exclusively for this fight. I’m used to making history in women’s boxing. I was the first woman to lead an event in a major amphitheater in Canada. On two occasions, my IBF defenses have been shown on pay-per-view in Canada.

“I have a lot of respect for everything Shields has accomplished; I am excited about this opportunity for my career and for the advancement of international women’s boxing. I am undefeated and, just like Claressa, I am coming to defend my world crown. We are going to have a lot of fun on March 5 measuring our skills, without restraints, and putting on a grandiose and memorable show. We have been waiting for this moment for a very long time.”