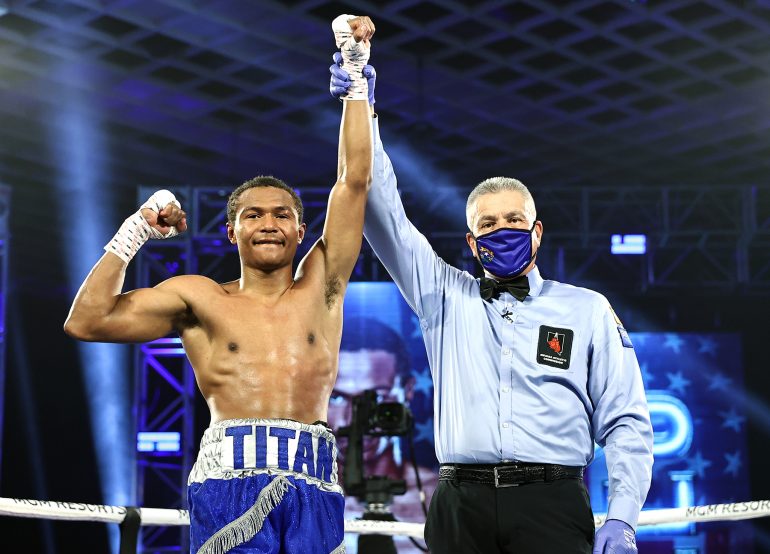 His lack of knockouts has become a common theme throughout his life.

“This is something that I have been personally dealing with for a long time.”

But undefeated Martino Jules is as straightforward as they come, and the young prospect admits that some of the blame has to be put on him.

“Even though I only have two knockouts, I’ve put guys on the canvas in multiple fights,” he told The Ring.

“I need to set up my punches better to get the knockouts.”

For Jules, he explained that it could come down to simply getting more experience in the ring.

The 126-pound prospect takes on hard-hitting Puerto Rican Pedro Marquez Medina in a scheduled eight-round affair on Wednesday at the Mohegan Sun Casino in Uncasville, Connecticut.

“I do believe that the more rounds I fight, the more likely I will start knocking guys out (late in fights).”

It is possible to have a solid career without having spectacular knockout numbers.

For instance, future Hall of Famer Ivan “Iron Boy” Calderon only had six knockouts in a phenomenal career that included 11 consecutive defenses of the WBO strawweight title.

Jules, however, yearns to please the fans.

“I just want to fight the top-tier fighters and give fans the fights they want to see,” he added. “Knockouts would be a big accomplishment, though.”

Knocking out Medina (12-1, 8 knockouts) will be no mean feat. The 26-year-old has never been knocked out and has scored three consecutive knockouts himself.

“We’re feeling really confident about this fight,” Jules countered. “Medina is from Puerto Rico, as are my coaches.

“This is a great opportunity for me to fight a Puerto Rican on a big platform.”

Jules (10-0, 2 knockouts), of Allentown, Pennsylvania, who is coming off an eight-round majority decision over Aleem Jumakhonov, will square off against Medina on ShoBox as part of a scheduled three-bout card.

The 23-year-old laughed as he explained what went wrong with his last performance.

“It was my stubbornness,” Jules said. “I fought injured and it really limited my ability in the ring.”

Looking ahead to the future, Jules is aiming high, perhaps too high at this stage. However, his goal is to fight the best and become the champion no matter what the cost.

“My main focus going forward is Emmanuel Navarrete,” he stated. “Whatever path I have to take to get that fight, that’s a path I am willing to take.

“When that opportunity comes, I believe I will take over as champion. I have more talent now than what he had.”