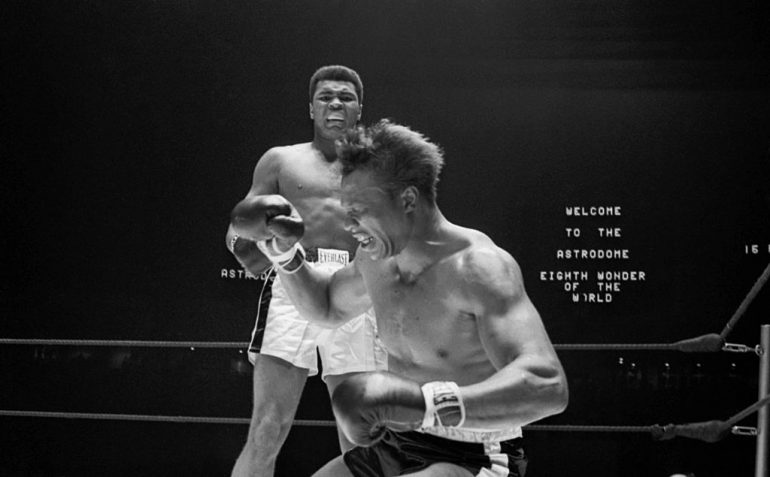 Editor’s Note: This fight report was featured in the February 1967 issue of The Ring Magazine. It is being presented verbatim.

With the knockout of Cleveland Williams in the Astrodome at Houston, Texas, Muhammad Ali (Cassius Clay), rid the field of challengers for the world heavyweight title of the man who had been heralded as the toughest of all contenders.

By stopping “The Cat” in 1:08 of the third round, Clay narrowed the contestants worthy of a championship match down to Ernie Terrell, of Chicago, and Zora Folley, of Chandler, Arizona.

The former already has been signed as Clay’s next opponent, with the Astrodome again the site of battle. If successful against Terrell, the champion has promised Folley that he will be next in line for a title shot.

Williams, supposedly a puncher with terrific power, failed to worry the champion. During the seven minutes and eight seconds of action, about half a dozen effective blows were landed by the challenger. The best was a left hook to the head in the second round. It tossed Clay’s head backward and forced him to dance out of range.

Once in that same round, in which the challenger was dropped three times, he trapped his opponent in the corner. But Clay, like a cornered animal, quickly maneuvered out of range, much to the dismay of Williams and his handlers.

It was the one big chance the Texan had to get across his reputed killer punch. But he missed the boat as Cassius weaved and ducked and slid out, to land a perfect right to the body.

Williams was both outmatched and outclassed from start to finish and Muhammad rolled up his sixth successful title defense of the year, one short of Joe Louis’ record.

The two-fisted assault, before an indoor crowd of 35,460 that paid $461,780, was the most vicious seen in any of the champion’s bouts since he won the crown. It should set at rest, for all time, doubts about his ability as a heavyweight king, a thoroughbred boxing champion. 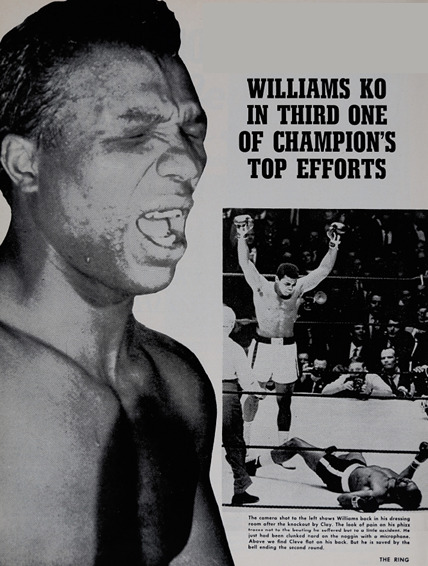 From the February 1967 issue of The Ring.

Clay’s customary caution was in evidence for only part of the opening round. Thereafter he was a fighting title defender who battered Cleve into a state of helplessness.

Williams’ reputation as a clouting terror didn’t faze Clay, who took command once the second round got under way and was in no danger thereafter. Stinging lefts and rights, often a tattoo of three or four punches landing in rapid succession without any maneuvering of his body, indicated clearly that Cassius was out to end the bout early.

So badly was Williams whipped that his backers looked on in amazement as their idol, blood spattered over his face from his deeply cut lip and nose, was wholly on the receiving end of an avalanche of thudding, straight shooting rights and deep sinking left hooks to the body. Each punch was more effective than its predecessor.

The Big Cat, weighing 210 ½ to 212 ¾ for his opponent, became an open target once Muhammad cut loose. The fast-moving champion kept Williams so busy trying to defend himself from perfect shots, that he had little opportunity to make use of the punch that enabled him to score 51 knockouts over a stretch of 15 years.

Thus Muhammad Ali, following in the footsteps of the great Joe Louis in title defenses, has now mowed down five of his six challengers, only George Chuvalo, of Toronto, lasting the limit of 15 rounds. Cassius said he had hoped this year to equal Louis’ record of seven defenses. He fell one short of the mark. His next fight is not due until February 1967.

Rare as it is for a referee to halt a world championship fight so early in the battle, there were no complaints from the loser’s cornermen when Harry Kessler, referee imported from St. Louis, waved Williams aside and declared Clay the winner.

At the time of the stoppage, the Texan was wobbly, groggy, unable to defend himself against a renewed attack after Williams had gotten to his feet following the fourth knockdown. The punches had struck the challenger with such swiftness, he didn’t have a chance to fight back or even defend himself.

Three knockdowns in the second round and one in the third, doubtless changed the opinions of those who had belittled Clay as a champion. The hoots that greeted Cassius when he entered the ring were largely responsible for the speed with which he went out for the kill. The jeers were turned into a thunderous ovation when Kessler held up Clay’s hand as the winner. The huge gathering fully realized when it was all over that Muhammad Ali stands supreme among today’s crop of heavyweights, with none shaping up as a possible victor over him in the near future. His workmanship was a reminder of the swift-lashing, powerful Joe Louis barrage that put Max Schmeling away in their second meeting.

Once again did Clay come out of a title defense without a mark on his face.

There are those who argue that the 10 years difference in ages, Cleve’s 15 years of ring action, the long hospital siege, the removal of one kidney following his being shot by a State patrol office, had much to do with Williams’ defeat.

But none of that should detract from the splendid performance of Ali, the best of his career.

I have seen, and been with, Clay on all of his foreign trips, since the Rome Olympic Games, and at no time have I seen him unleash such power as against Williams.

In contrast to other performances, Cassius was a fighting machine in Houston. Once he unlimbered his heavy artillery, he faced a confused, bewildered, floundering opponent who was baffled by what was taking place. The unexpected had happened and the fans saw a one-sided affair.

Cleveland, a good left hooker, couldn’t get that punch across. He tried desperately in the second round when he had his opponent trapped, but to no avail. Clay flitted away, quickly wheeled and slammed home a perfect right that caused the Texan to drop to the canvas.

That punch took Williams and his followers by surprise. He got to his feet and took the mandatory eight count while his seconds kept yelling to him, “get out and jab, jab!”

The Cat walked in, but instead of striking Clay he was caught by a combination, left and right, that landed flush in the mouth, split his lip and decked him for the second time. He was up at two but took the mandatory eight count.

Bleeding from nose and mouth as he got to his feet, the challenger went after his tormentor and tossed several punches, none of which hit the target. 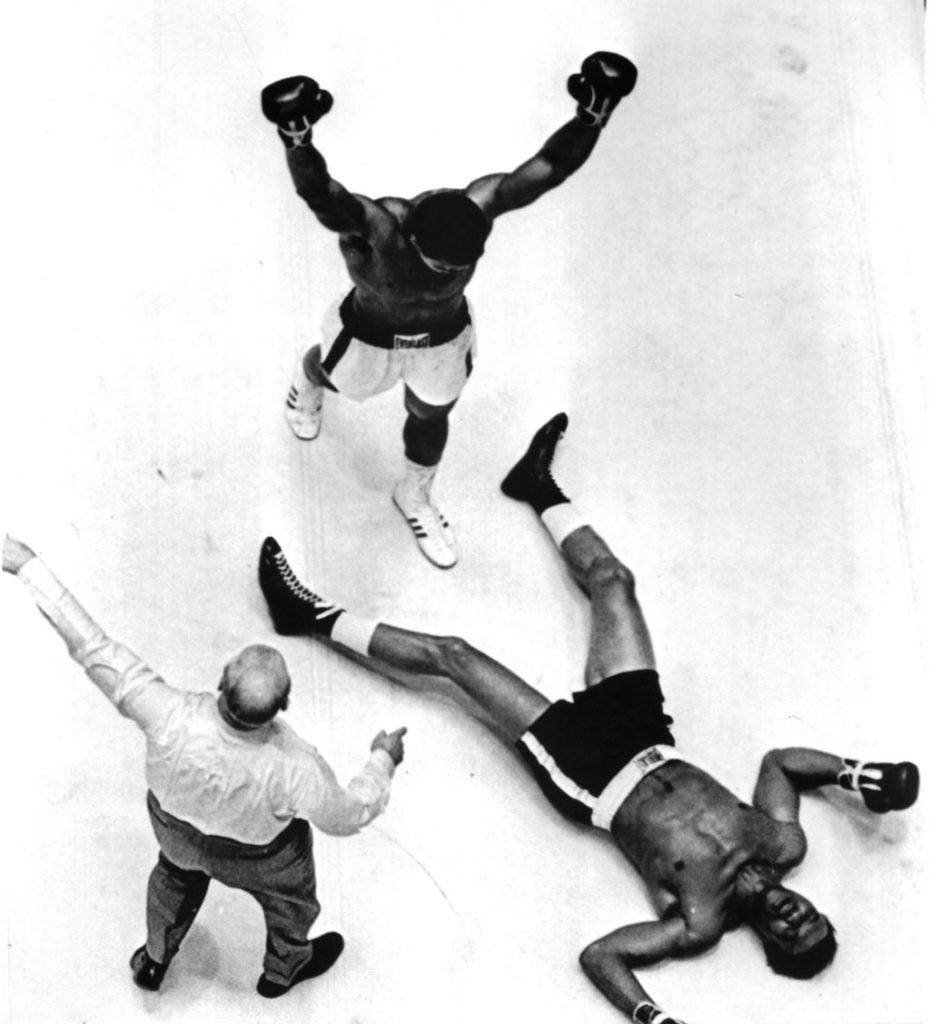 The end is near. Photo from The Ring archive

As Williams tried to hook one over, Clay shifted to one side and like a flash, landed a left and right that stretched Williams full length on the canvas for the third knockdown. This time referee Kessler counted to five. Then the bell came to the Texan’s rescue.

The two-handed combination was used several times in the final round, each time with effectiveness. Williams, veteran of 71 fights, was spun around with the first punch in the third. He staggered in to meet his rival and again was dropped, this time for a two count, with a left and right to the jaw. When the fight resumed, he stood facing Kessler.

The challenger could offer no defense as Clay unleashed all he could muster to put an end to the slaughter. He belted away with right rights and lefts in rapid succession until Kessler intervened.

Pandemonium reigned in the Dome as a rush for the ring was made by Clay’s cohorts. It was bedlam, but Cassius enjoyed it.

Williams said, “I didn’t know what was going on after Clay smashed his right to my mouth in the second round. I don’t remember the other knockdowns.”

Asked whether he ever was hit harder, The Cat replied: “He was not the hardest hitter I’ve met.”

Hugh Benbow, Cleve’s loquacious manager, who for weeks built up the fight by harping on what his fighter would do to Clay, now thought otherwise. For days he had predicted Williams would run Clay out of the ring and would win by a knockout in three or four rounds. Now, saddened and gracious, he gave Clay full credit as a fighting champion.

“I kept saying he was a phony, a clay pigeon, but I take it all back. I apologize. He made a sucker out of me and my boy,” said Benbow. “He made a believer out of me. He’s the real McCoy. I’m now convinced of his punching ability. He’s a real champion. Let’s not kid ourselves any longer.”

A federal writ was served on Williams for $67,614.62 which his former backer, Bud Adams, owner of the football Oilers, claims is due him.

The court ordered Williams’ share of the fight revenue, $92,266, withheld pending a hearing.

Clay received $230,645, to which will be added what is due on the ancillary rights, closed circuit TV and radio.