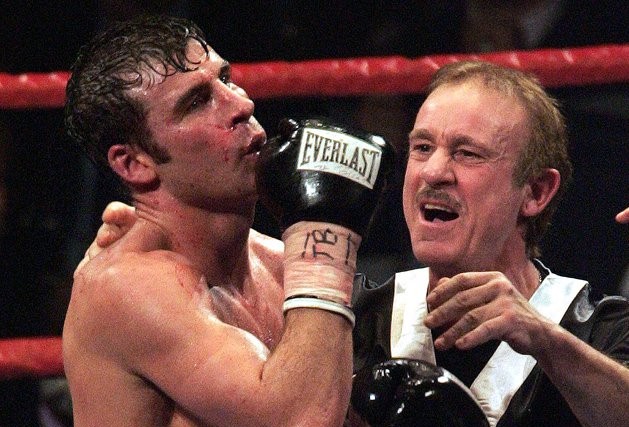 Editor’s Note: This feature originally appeared in the March 2014 issue of The Ring Magazine.

Joe Calzaghe accomplished a great deal in his 15-year boxing career, but one thing stands out: The “0” in his loss column. The “Pride of Wales” won all 46 of his pro fights (32 by knockout).

And that’s saying something given the long list of capable opponents he swept aside to become one of the greatest 168-pounders ever, including Chris Eubank, Robin Reid, Richie Woodhall, Charles Brewer, Jeff Lacy, Sakio Bika and Mikkel Kessler.

Calzaghe outpointed Chris Eubank in 1997 to win his first world title, the WBO version, and successfully defended it a division-record 21 times over a dominating decade to establish himself as an all-time great. Only heavyweight legend Joe Louis reigned longer.

He would add The Ring, IBF, WBA and WBC titles to his collection before moving up to light heavyweight for his final two bouts.

Many of Calzaghe’s fights were memorable, particularly to his fans in the U.K. Blessed with great hand speed and athleticism, Calzaghe made a mockery of the oddsmakers with his win over Lacy for the IBF title.

Sugar Ray Leonard was one of many who were greatly impressed.

“The performance he produced was amazing,” Leonard wrote in his autobiography. “It was artistic, a demonstration of pure boxing. Joe would have beat anyone with that style, that mindset. What he performed was a boxing clinic, masterful.”

The Kessler fight, the following year, drew 50,000 rabid hometown fans to Millennium Stadium in Cardiff. And Calzaghe didn’t disappoint. The first six rounds were close but, after Calzaghe made adjustments, he pulled away from the talented Dane to win the WBA and WBC titles.

Calzaghe moved up to light heavyweight and boarded a plane for America to take on Bernard Hopkins, one of the greatest middleweights ever, who at 43 still had the ability to win big fights. Calzaghe went down in the first round but came home with a split decision victory and The Ring Magazine title, proving he could win away from home.

“I basically did to Roy Jones what Roy Jones did to everyone,” Calzaghe told The Ring. 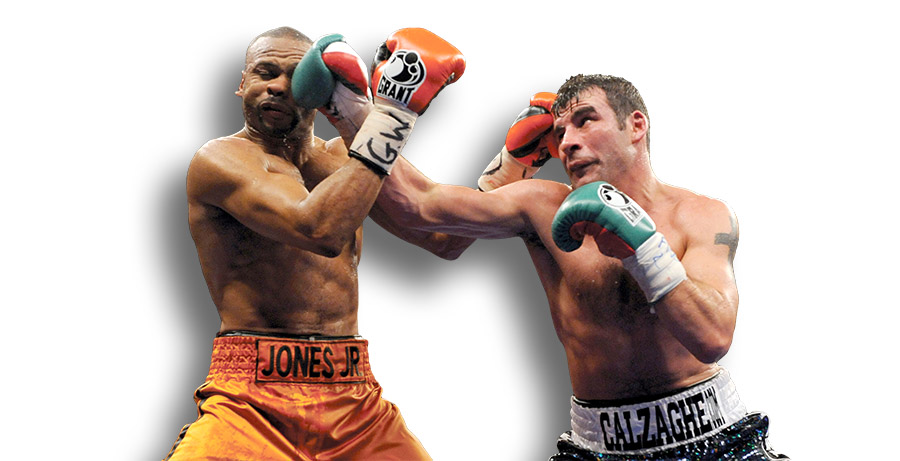 Calzaghe retired in February 2009, becoming one of the few to leave the sport without experiencing a defeat. No one was surprised when the International Boxing Hall of Fame announced recently that Calzaghe will be inducted in 2014, his first year of eligibility.

Now 41, he splits his time between his home in Wales and London. He has made a number of appearances on TV in the U.K. since he retired, including Strictly Come Dancing and Master Chef.

Calzaghe graciously agreed to speak to The Ring about the best he faced.

BEST OVERALL
Mikkel Kessler: That’s close. I would say when I beat him, he was at his peak, 39-0. I think I was a bit older than him. It was my last fight at super middleweight. Massive pressure at the Millennium Stadium, 50,000, he held three belts. The Mikkel Kessler I beat was the best Mikkel Kessler. Kessler just edges it between him and Bernard Hopkins.

BEST BOXER
Ritchie Woodhall: He was very motivated for that fight. I remember I was edging the fight. He started to tire. He was a very good boxer. He fought the right tactics, great amateur. He used his reach and boxed in and out on his toes, [using] his right hand against the southpaw. He caught me with a few of them bad boys before I sussed him out.

BEST JAB
Kessler: That’s a tough one. I’d probably say Kessler had the best jab, at least for the first six rounds.

BEST DEFENSE
Bernard Hopkins: I think Hopkins had the best defense. I think he’s so wily. The way he fights from range stops you working your way in. He’s very hard to catch clean. I was throwing lots of shots. He’s very clever, like a fox. He’s sly. He comes in and out of range. He’ll tie you up on the blind side of the ref.

BEST CHIN
Jeff Lacy: I’ve fought quite a few people with good chins … but the amount of times I hit Jeff Lacy and he didn’t go down. To be honest, I hit him over a thousand times. How he stood up to that beating I’ll never know. So I have to give him some kudos for taking the beating he took. That was my perfect night, I think. I just brought my “A” game.

BEST PUNCHER
Charles Brewer: There’s a few. Kessler hit hard, but I’d probably Go with Charles Brewer. My game plan was to outbox him, but Charles “The Hatchet” Brewer I had seen knock out lots of guys. So I figure I’ll outbox him. I remember in the first round he came out and whacked me right in the solar plexus. If you watch the tape, you see me take a deep breath and then go toe to toe for the rest of the fight. He buzzed me up a few times in that fight. Heavy-handed and dangerous from the first round till the 12th.

FASTEST HANDS
No one: I never really look at opponents and think of them as fast, because I’m so much quicker. I don’t mean to sound funny. When I fought super middleweights, I always found them quite slow even though they’re fast. I used to spar with welterweights because of my hand speed.

FASTEST FEET
Kessler: I tried to force the fight in the first four rounds [against Kessler] but because he’s so good with his feet, I was falling short, and he was moving back and catching me with the right hand and uppercuts. He busted me up twice in the fourth round. I sat back on the stool and my dad said, “What’s going on?” I said, “I’ve got to change something.” I started to outbox him from the outside. He was waiting for me and was good with speed and timing. I’d probably give Kessler the edge.

SMARTEST
Hopkins: He was the smartest guy I fought, definitely. He had a game plan and he nullifed me. He tired in the second half of the fight, though. When he started whining to the referee, I knew he was tired. I kept throwing punches. I’m strong mentally and he knew that. There’s one thing that happened that not many people realize. At the weigh-in, he looked at my ribs and said, “I’m going to f—— bust them up, man. I come from the street.” I looked at him and said, “What the f— does that mean? I’m going to bust them up” (pointing at Hopkins’ ribs). He took a step back from me and looked at me like he didn’t believe I had just said anything back to him. I just laughed, and he walked away. The next day when he came into the ring, Hopkins didn’t wear his hood for the only time. Why is that? I think he knew he couldn’t get in my head. I took that as a positive.

STRONGEST
Sakio Bika: He’s one tough son of a bitch! Sakio Bika was tough. That’s the only time I’ve been really bashed. I had six stitches from a head butt, there were shoulders, elbows, everything going in. I hit him with everything, couldn’t hurt him. This was the fight after Jeff Lacy. Physically strong guy.