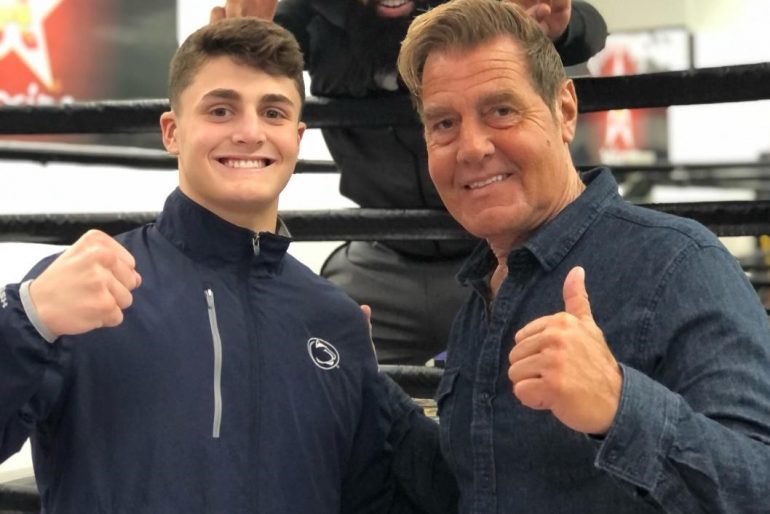 Joe Goossen possesses the kind of discerning eye that doesn’t take long to see things. So, when the veteran trainer and FOX ringside analyst took a glimpse of 18-year-old welterweight prospect Vito Mielnicki Jr. he liked what he saw, and saw a few things he could do to help the young fighter.

It didn’t take long for Mielnicki (7-0, 4 knockouts) to find that out himself.

Now, it looks like, the two are a pair.

After working sporadically with one another, the Roseland, New Jersey, native made the commitment to Goossen in his last fight, a six-round decision over Steven Pulluaim on the Errol Spence Jr.-Danny Garcia undercard on Dec. 5, at AT&T Stadium, in Arlington, Texas.

Mielnicki is looking to buy a condo in the Van Nuys, California, area where Goossen lives.

“Joe’s the best of the best, I know he’s going to keep improving my arsenal and helping me get to where I want to be,” said Mielnicki, who had long conversations with Goossen before pulling the trigger on the partnership. “Joe obviously has a lot to offer, and in New Jersey, we’re taught about the outside game and long punching. Already in the few months that I’ve been with him I’ve learned so much. 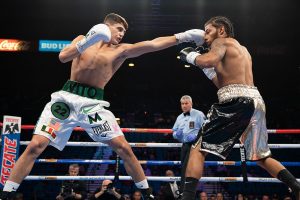 Mielnicki liked Goossen’s tone. For the Pulluaim fight, Goossen stayed even and calm.

“Joe’s a great guy and a family guy, I’m a family guy, so this is a great combination,” Mielnicki said. “Jonathan Walley will also be working my corner. I used to think I was a hard worker, then I came out here with Joe and I found that this is a whole new level.

“We’re sparring 50-plus rounds a day and I’m running a lot more. I liked going six rounds in my last fight, and I know I’ll need the rounds going forward. I like how I settled into the fight. Joe’s all about hard work, and how you perform in the gym is how you’ll perform in the ring.

“When I was Jersey, I was working 20 rounds a day and I thought I was working hard. I did one workout with Joe and I was gassed. You have to get comfortable with being uncomfortable to be great, which is something my father always told me.”

After a week, Mielnicki grew used to Goossen. He likes Goossen’s attention to detail, down to the very way he throws punches.

Goossen absolutely loves Mielnicki. He says he feels re-invigorated working with someone so young, younger than some of the 67-year-old Goossen’s grandchildren.

“I called a few of Vito’s fights and I really liked his style,” Goossen said. “After one of Vito’s fights, Vito Sr., Vito’s dad, Vito and myself had a conversation about some small detail stuff and from that point on, there was a connection.

“I really like the kid. He’s a can’t-miss kid. Vito proves that to me every day in the gym. You show Vito something and he shows it to me very quickly, he’s really a sponge. I’m very happy that I’ve made the decision to work with him.”

Goossen really likes the fact that Vito Sr. turned over the keys to his son.

“That means a lot to me,” Goossen said. “I see an 18-year-old kid with a great future ahead of him. I also have the personal viewpoint where I don’t want to disappoint Vito. He’s wide-eyed and the world is his oyster, like we all were when we were 18. I want to give him 110-percent.

“It’s a serious thing for me. To cut the cord, like Vito Sr. did, putting many miles and many hours into those amateur tournaments, to let Vito out on this adventure, this will mature Vito more quickly.

“It’s all on Vito. No one is forcing Vito to get up and run every morning, or get to the gym. In that respect, it’s really a smart move by Vito Sr. Sometimes, you have to cut the cord and make their own way. I really love that about Vito Sr. I mirror what Vito Sr. is thinking.

“Vito Sr. and I kind of checked off all of the boxes where we’re very comfortable and on the same page. But I love the fact that Vito Sr. said. ‘Hey, I trust you with my son.’ There’s no greater compliment nor any bigger responsibility than that. I don’t want to disappoint anyone.”