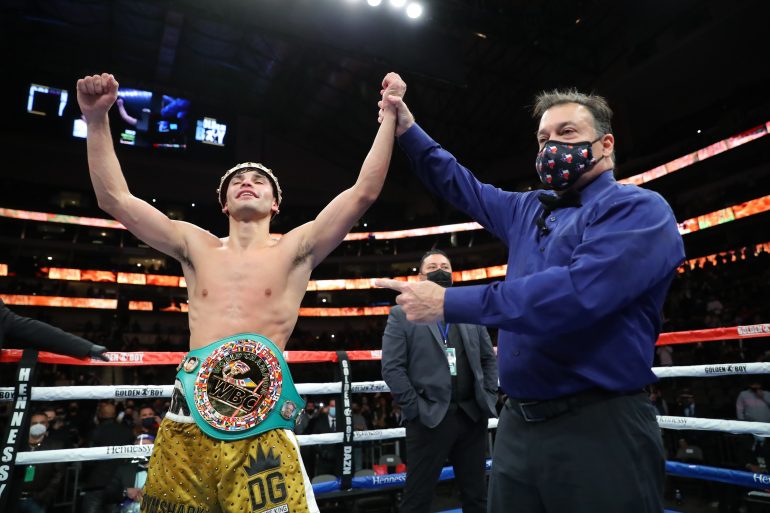 Ryan Garcia justified his position as a top lightweight with the most impressive – and grittiest – performance of his 4½-year pro career, an up-from-the-canvas stoppage of The Ring’s No. 4-rated contender Luke Campbell on January 2.

Garcia entered the bout as The Ring’s No. 5-rated lightweight, a ranking that more than a few hardcore fans and media members questioned due to the lack of standouts on his resume (or perhaps because of his 10-round struggle with fringe contender Carlos Morales in 2018), and probably due to his status as a social media celebrity. However, the 22-year-old Californian proved there’s substance to go with his charisma and flashy boxing style by getting up from a second-round knockdown, taking control of the bout with measured aggression, and putting Campbell away with a sneaky left to the body in Round 7.

Campbell (20-4, 16 KOs), an Olympic gold medalist and two-time title challenger, had never been stopped as a pro. Garcia (21-0, 18 KOs) wasn’t perfect in the first world-class test of his career, but he still shined. So, where should the budding star rank in the aftermath of his exciting DAZN-streamed performance?

Senior panelist Anson Wainwright suggested elevating Garcia to No. 3 and dropping Campbell to No. 6. However, other members of the Ratings Panel and Editorial Board countered with a No. 2 ranking for “King Ry.”

“I’m cool with Garcia at No. 3, but he could also jump (Devin) Haney and go in at No. 2,” said Associate Editor Tom Gray. “That was a spectacular one-punch body shot knockout over a top-five Ring rated lightweight who had never been stopped. Being honest, Haney has nothing like that on his resume and the WBC title he holds doesn’t change that. In fact, Garcia to No. 2 is my vote.”

Added panelist Martin Mulcahey: “Ryan Garcia has converted me. I saw a speed merchant tested by a world class foe and (my doubts were) laid to rest on Saturday. He has the mentality of champ, and not only recovered but took the lead the next round after a hard knockdown. Yes, Garcia to No. 2 (with reservations since I rate Haney’s win over Juan Carlos Burgos). I would drop Campbell to No. 9, as we have seen him come up short (in title bouts) three times now. Also, I think people quickly forget how Haney is (coming off) one ordinary outing but he won every round against (Yuriorkis) Gamboa. If Garcia and Haney fight tomorrow, I put my money on Haney.” 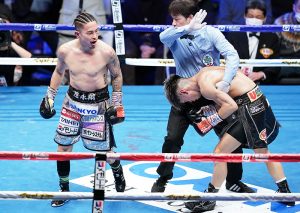 Kazuto Ioka finishes Kosei Tanaka in dramatic fashion in the eighth-round of their year-ending Tokyo clash. Photo by Naoki Fukuda

The Panel also discussed the pound-for-pound rankings inclusion of junior bantamweight titleholder Kazuto Ioka, who defended his WBO belt with an impressive eighth-round stoppage of Kosei Tanaka on December 31. Ioka (26-2, 15 KOs) is a 31-year-old four-division titleholder who has faced top opposition from strawweight to junior bantamweight. Tanaka (15-1, 9 KOs), a battle-tested 25-year-old slugger, is a three-division titleholder who was Ring’s No. 1-rated flyweight going into the anticipated New Year’s Eve showdown with Ioka.

“I can see an argument for Kazuto Ioka to come in at No. 10 (in the pound-for-pound rankings),” said Wainwright. “It was very impressive his dismantling of Kosei Tanaka. Tough to bump (previous No. 10-ranked) Gennadiy Golovkin but I’ve gone back and forth on this and I’m in favor of Ioka entering at No. 10.”

Added Gray: “I’d like (in fact I want) Ioka in at No. 10. I love GGG, but he’s not performing at Ioka’s level right now, so it’s the correct decision. If GGG returns to form in a big fight, then he’ll come right back in again.”

Montero, Dixon, Morilla and Mulcahey agreed with Ioka cracking the mythical rankings at No. 10.

Also, the Panel voted to remove Canelo Alvarez from the Ring’s middleweight championship given his decision to abdicate his WBA 160-pound belt and recent comments regarding his plans for 2021. Alvarez, who won The Ring’s super middleweight title last month, hasn’t fought at middleweight since outpointing Daniel Jacobs in May 2019.

Ring Ratings Update (as of January 2):

Pound for pound – Kazuto Ioka enters at No. 10.

Lightweight – Ryan Garcia advances to No. 2. Campbell drops to No. 6.

“Garcia’s ‘W’ over Campbell trumps Haney’s entire resume, he should move to No. 2 behind Teo and Loma,” said Montero. 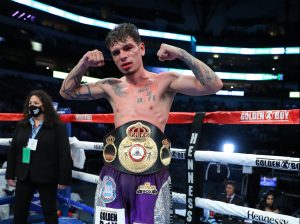 Roger Gutierrez pulled off the upset over Rene Alvarado thanks to three knockdowns. Photo by Tom Hogan-Hoganphotos/Golden Boy

Junior lightweight – Roger Gutierrez enters at No. 8 after narrowly outpointing Rene Alvarado, who drops to No. 9. Masayuki Ito exits the rankings after dropping a majority decision to unheralded Hironori Mishiro.

“Kazuto Ioka was sensational against young lion Kosei Tanaka, stopping him in eight rounds,” said Wainwright. “I’d love to move him up, never before has a win deserved a move up (as much as this one) but that would mean moving above Roman Gonzalez who had a terrific 2020. Harsh as it is, keep where he is.”

Added Gray: “My pound for pound recognition for Ioka is based on his impressive journey through the weights and the fact that he’s still kicking ass at 115. Gonzalez posting wins over (Carlos) Cuadras and (Kal) Yafai at this weight is enough for him to hold the No. 2 position but there’s nothing in it. Ioka just wasted our No. 1-rated flyweight effortlessly and his performance level was top drawer.”

Added Mulcahey: “Yes think we should stick with Roman over Kazuto Ioka for now, since Tanaka was moving up in weight. If Roman had not had the great year he did I would have said Ioka (advances).”

Junior flyweight – Felix Alvarado advances to No. 2 following a 10th-round stoppage of gutsy DeeJay Kriel in defense of his IBF title.

“Kriel is a tough SOB, but Felix Alvarado just too strong and is deserving of going up a spot since Kriel had a good win in America before this against Carlos Licona so is no mug,” said Mulcahey.

Added Wainwright: “Kriel was tough and showed some skills but was ultimately outgunned.”