Junior Lopez, trainer/father of Teofimo, had a spicier New Year’s Eve than you 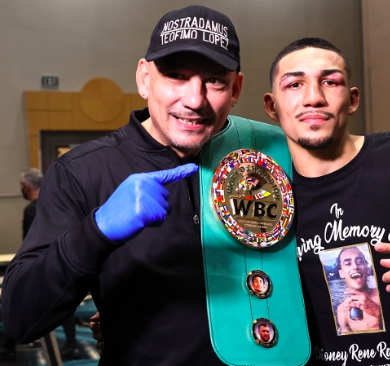 I bet you had a less eventful New Year’s Eve celebration evening than Junior Lopez, the trainer/father of young gun Teofimo Lopez, the 2020 Fighter of the Year on many a year-end list.

Here’s what the Brooklyn native told me he did on Dec. 31, to ring in the start of a new calendar year.

“I made love to all the belts, and then went to sleep,” the oft combustible tutor, who has to me looked like a serene soul since the early morning of Oct. 18, told me.

I chuckled, because how could I not? This guy is a capital C character, and you don’t have to love him, but at the very least, you sort of have to appreciate him for being colorful. The man is interesting, and can we agree, still, that he deserves due credit well into 2021, because he told us so? 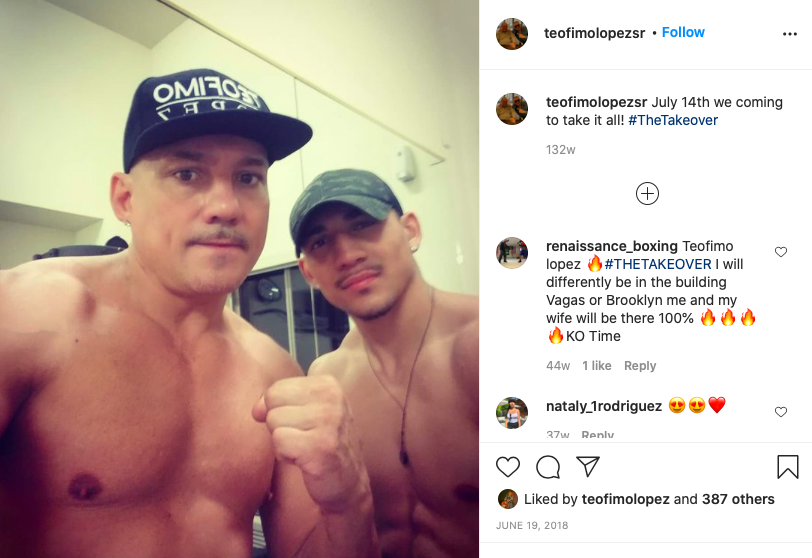 He told us all along, he told us for a few years, and it played out to be just as he said, basically. “I’m the best fucking trainer in the world,” Lopez the elder told me when I started a Monday phone chat, and asked him how his ’21 has been so far.

As for being the BEST trainer, I won’t dispute that, I told him, but surely there are one or two others who are in contention for the honor, no?

“The RING recognized me for that, and now we’re waiting for the Boxing Writers Association of America vote. Who else is there? Nobody else! People trying to say Derrick James, but those guys (Errol Spence, Jermell Charlo) were already champions. My son came from scratch, and we destroyed The Matrix, Lomachenko!”

That will be for the BWAA to decide–ballots need to be in by 12 noon on Jan. 22– I said, and no, I’m not sure how that’ll play out, because I don’t much ask around, and check with my colleagues who they are pulling the lever for.

Back to that epic New Year’s eve…I had some fun with that construction, Junior Lopez romancing the straps. Did he have a preference, was there one ‘date’ which stood out, and when the fog of the night cleared, stands as being ‘the one?’

“I like the one in the middle, that nobody else got,” he said. 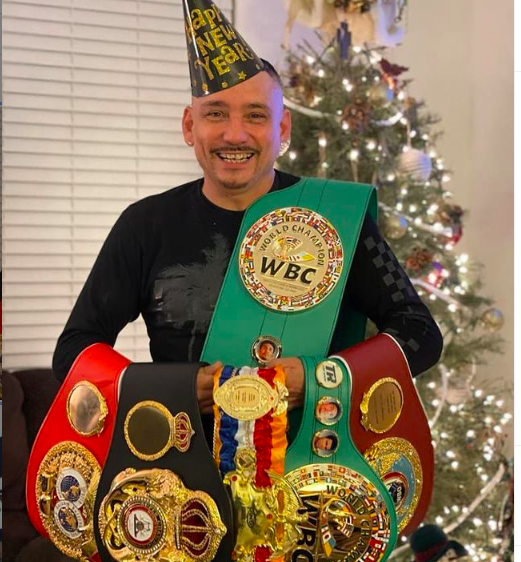 Junior Lopez kissed and told, when pressed. Which of his New Year’s Eve accessories floods him with the warmest memories? The one in the middle, he stated.

So we had some fun with the past, and then looked to the future. I was curious, are we talking the near future, or what’s the timeline? When do we maybe see Teofimo back in a ring?

Sometime in April, Junior believes. “I think everything will get squared this week,” he said.

George Kambosos (19-0; age 27; from Australia) is looking like next, and if for some reason that doesn’t get to the finish line, he said, then maybe a push to get Devin Haney to step to the line would make the most sense.

“If not Kambosos, then whoever at 135 has the balls to fight my son,” he said, when I asked for a fleshed out mini list of April dance partners.

“Man, there are a lot of fake guys out there, they can go win fights, because you got to go for the glory! And the only glory at 135 is Teofimo! People talk about Devin Haney, what does Devin Haney got? If we’re talking Devin Haney, we’re gonna beat this kid bad. We’ll shut him up real soon, we will call him out if Kambosos doesn’t happen.”

And yes, if you are curious, prep work has already started. No New Year coast for the Top Rank talent Teofimo, apparently. Junior was talking to me from Las Vegas, and his son has started the process to be in top form for an April scrap.

Michael Woods is the publisher of NYFights.com. His latest story on that website has to do with boxing podcaster Jonathan Leir, who is facing allegations that he wasn’t up front about his history.