Ring Exclusive: Canelo Alvarez maps out his plans for 2021 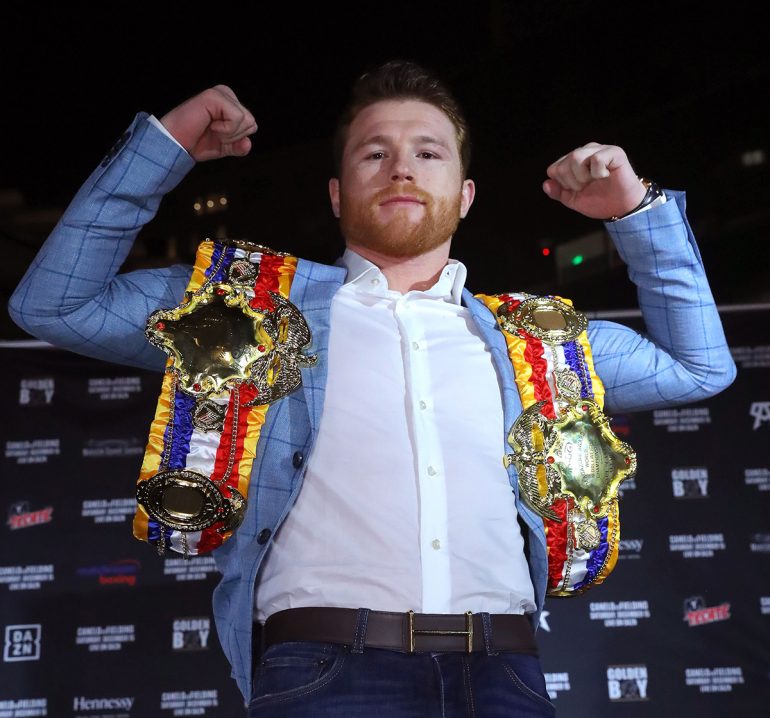 Now that it’s in the rearview mirror, 2020 was not a year to remember for anyone. It short-circuited the world, and it certainly yanked the grand plans of superstar fighters like Canelo Alvarez, The Ring and the world’s No. 1 pound-for-pound fighter.

Boxing revolves around Alvarez—like it once did Floyd Mayweather, which is the heights in which Canelo has attained.

With 2021 arriving, Alvarez (54-1-2, 36 knockouts) has severed his promotional ties from Golden Boy Promotions and his broadcasting obligations to streaming service DAZN to become a free agent.

Alvarez is big enough to do so, transcending the sport to the point where he is able to call his own shots, who he wants to fight, on what network he wants to fight on, eschewing the entanglements that prevented him from fighting anyone from Top Rank, Premier Boxing Champions or Matchroom.

In an exclusive interview with The Ring, Alvarez spoke about his plans to stay at 168 pounds and collect all of the titles there. Canelo is currently The Ring/WBA/WBC super middleweight champion, and The Ring/WBA middleweight beltholder.

So, Alvarez has plenty of options for his plans to fight in February, to fulfill a WBC mandatory obligation against Avni Yildirim (21-2, 12 KOs), then go back to his traditional schedule of fighting Cinco de Mayo weekend in early May and in September during Mexican Independence Day weekend.

“I’ve worked hard for this and it’s a great situation to be in,” Alvarez said during a conversation with The Ring during the Christmas holiday. “It’s a pretty simple plan for 2021, fight for all of the belts at 168 and fight three times, maybe four. We’ll see.

Canelo made this point emphatic: If Golovkin wants to fight a third time, he would have to come up to face him at 168. Golovkin is a very large middleweight, and it would not be a stretch physically.

The two fought to a draw in 2017 and a year later, Alvarez beat Golovkin by majority decision in 2018. Over the last two years, Alvarez has become a far more complete fighter and would be heavily favored if the two were to meet again a third time.

Alvarez has been that overpowering.

Besides, Canelo feels, what else is there to prove against “GGG”? 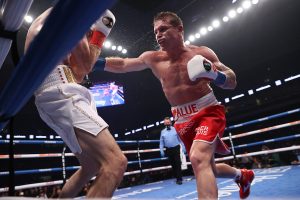 “I don’t have to prove anything to anyone, I did my job already by beating him twice and right now, I want to stay at 168, and if (GGG) wants to move up, we’ll see what happens, if that’s what the fans really want,” he said. “I’m at 168 and I don’t have to do any favors for anyone. I’m at 168 and our goal is to unify here.

“I feel good right now, I feel strong. I feel like I’m at my peak and I continue working hard. If a fight happens a third time (with GGG), I feel so good that I could I most likely knock him out and do some serious damage.”

Alvarez is also at a nice juncture in his life. The media during his fight with Callum Smith in San Antonio gave him nothing but rave reviews as to being accessible and incredibly approachable.

Canelo maintains that he’s always been that way. He realizes that the media obligations are a part of the business.

“In the past, it could be with the old promoter that I had, maybe they may have said some things about me that were not true, false statements about the way I was or about my character, but I always showed love and respect to the media and to my fans,” Alvarez said. “We all work together, the media, the fans to make the fights. I love my fans.”

Alvarez’s trainer, Eddy Reynoso, the 2019 Boxing Writers Association of America Trainer of the Year, says Canelo can be ever better. The boxing world is now coming to Team Canelo.

“We’re independent and we can talk to anyone we want to right now and we have some great plans for the future,” Reynoso said. “The plan is to fight our mandatory in February and then fight again in May and in September. Maybe we’ll look at Saunders down the line and then Plant. Our goal is to be the first unified Mexican super middleweight champion.

“We want to unify all of the titles and fight the best 168-pounders out there. GGG is fighting at 160, but our goal is to fight at 168. Benavidez is a good fighter, but the only thing about him is that he does not have a belt. He has accomplished a lot in his career, but Saul is about winning all of the belts.

“We also don’t know if Benavidez can reach 168 pounds anymore. There is no purpose to fight him right now.

“GGG can come up to fight 168, even though it looks like he can make 160 comfortably. If he wants to stay there, that’s fine, that’s his choice. But if GGG or Charlo wants to come up and fight at 168, that’s fine, too. We have no problem fighting anyone.

“Canelo went through a very stressful time with the former contract and we had to make a decision on what we wanted to do, and we took a risk in getting out of the contracts. There was light at the end, and we fought and beat a difficult champion in Callum Smith.

“I don’t think I ever saw Canelo so happy after he beat Smith. He was back in the ring doing something he loves to do. He’s always learning and right now his mindset and training mode is like he’s just starting his career. We’re looking to have a great 2021.”

Right now, Alvarez looks like he could beat Godzilla.

There’s no disputing he’s the Godzilla of boxing.