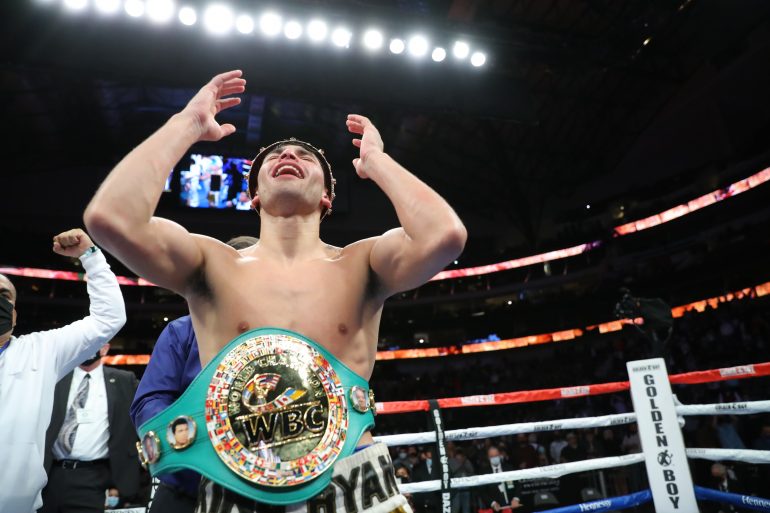 With the heated battle behind them, Ryan Garcia, the conquering upstart, paid his respects to Luke Campbell, the older veteran. Garcia had moments earlier completed his comeback win, rising from the floor in round two to score a knockout in round seven.

It was poetic how the knockdowns mirrored one another. Campbell changed directions on his overhand left, starting it as if it was going to the body, before bring it to the head, where it caught Garcia’s chin as he pulled straight back, depositing him on the canvas for the first time in his career.

Near the end of the fifth, Garcia made his own impact, buzzing Campbell with a left hook to the temple that had him momentarily defenseless. Campbell recovered, but that shot weighed heavily on his mind. Two rounds later, Garcia stepped in for what looked like another hook to the head. Instead, it was a lead left to the body that left Campbell breathless, and down for the count.

Post-fight, they mirrored one another’s class as well.

“I’ve never been dropped before in my life. Thank you…You taught me a lot,” Garcia (21-0, 18 knockouts) told Campbell, showing his willingness to grow. Campbell, who had been in the ring with Vasiliy Lomachenko and Jorge Linares in title fight losses, tipped his hat to Garcia after suffering his first knockout defeat.

“[Garcia is] very heavy handed. Even when I was blocking the shots, I could feel them,” said Campbell. “That was the hardest shot I was ever hit with. I tried and tried to get up, but I couldn’t.”

Since turning pro in 2016, Garcia has fielded constant comparisons to his promoter, Oscar de la Hoya, a hard-punching former lightweight whose looks appealed to a certain demographic (read: female). For the first time, the comparison fit most appropriately. De la Hoya too had been knocked down in early fights against Narciso Valenzuela and Giorgio Campanella, only to storm back with a vengeance. Those wins revealed his character, just as Garcia had against Campbell. 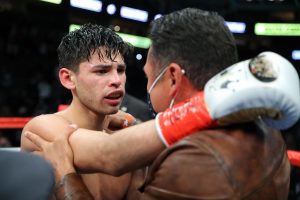 “This is the kind of fight where superstars are made,” said De La Hoya. “Down on the mat early for the first time in his career, Ryan got up, rallied, broke down his man and got the knockout. Everyone in the lightweight division should consider themselves on notice. 2021 will be the year of Ryan García.”

The win earned Garcia the “interim” WBC lightweight title, which in theory puts him next in line for a shot at a world title. But more than that, it showed that there was some substance to go with the flash. Garcia may have hair like a boy band singer and 8 million Instagram followers, but even the most jaded of boxing’s hardcore fans will begrudgingly admit he has heart.

Garcia made it clear who he wanted next, leading the American Airlines Center in Dallas on a “Let’s go, Tank!” chant. While the Garcia fans in attendance might be willing to walk down that road with him, jumping from Campbell to the junior lightweight champion Gervonta Davis would be skipping several rungs along the ladder. Davis scored perhaps the most violent knockout of 2020, putting Leo Santa Cruz’s lights out with a single counter uppercut in his last outing.

Garcia has shown steady improvement under trainer Eddy Reynoso, but rarely moved his head against Campbell, and his instinct to lean straight back from punches put him on the canvas on Saturday. A defensive lapse like that against Davis could be much harder to recover from.

Another possibility is Devin Haney, the WBC titleholder at ringside. That fight would be easier to make, since both fight on DAZN, and less of leap, as Haney, supremely skilled and still growing, is also a work in progress. Garcia spotted Haney at ringside and pointed to him, saying “We’ve got a rivalry but I want to fight him, too.”

A faded champion like Linares is a more manageable next step, someone who has the experience to keep Garcia honest, but isn’t nearly as dangerous as he’d been a decade ago. Linares sent a not-so-subtle message to Garcia, writing “I’m waiting for you Ryan” in an Instagram story.

It’s important to keep in mind that Garcia is just 22 years old, still several years from the sweet spot where strength and experience meet. Some of Garcia’s youth and insecurity showed in the dressing room afterwards, when he asked Campbell if he was the hardest puncher he’d ever faced. Campbell nodded yes before they snapped a photo together.

As “KingRy’s” star rises, he’ll learn that heavy is the head upon which the crown rests.

“I guess pretty boys can fight,” Garcia said, sending a compliment to Campbell that some would apply to him as well.