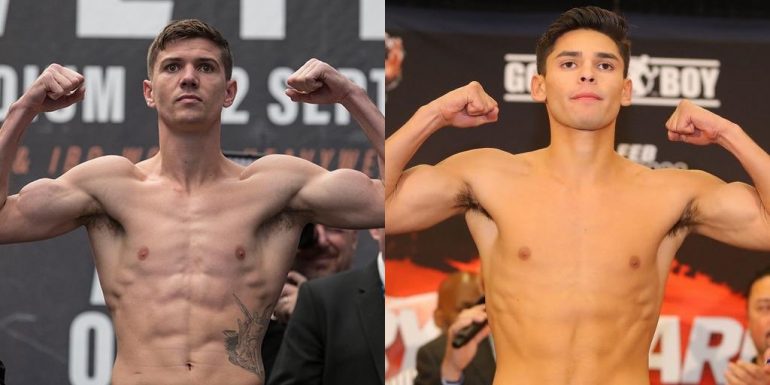 On Saturday, rising star Ryan Garcia will face his toughest test to date when he faces perennial lightweight contender Luke Campbell in a 12-round scheduled contest at the American Airlines Center in Dallas, Texas.

Campbell, who is rated No. 4 by The Ring at 135-pounds, is a tall, awkward southpaw. He claimed gold at the 2012 London Olympics. In the professional ranks, the popular Englishman has beaten former world titleholder Algenis Mendez (UD 12) and perennial contender Darleys Perez (TKO 9). However, when he stepped up, he suffered a close loss to Jorge Linares (SD 12) in a Ring Magazine/WBA title shot, but was dominated by Vasiliy Lomachenko (UD 12) in his second world title attempt.

Garcia, who is rated No. 5 by The Ring at 135-pounds, is every bit the new-age fighter; a social media phenom, with millions of followers. Initially there was a question mark as to whether Garcia’s achievements would live up to his outside-the-ring persona, and appeared to plateau in 2018, before teaming up with Eddy Reynoso. Since then, “Kingry” has kicked things up a notch and showed his vaunted power, knocking out solid contenders Romero Duno (KO 1) and Francisco Fonseca (KO 1).

It’s one thing for Garcia (20-0, 17 knockouts) to do what he did to Duno and Fonseca, but can he do it against a proven world class opponent? Can Campbell (20-3, 16 KOs) take the young lion into deep water? What happens when Garcia lands his left hook? Can Campbell test Garcia’s chin? 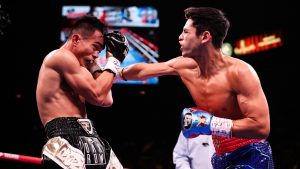 “Garcia beats Campbell. Being honest, I haven’t got a clue who’s going to win. Some days, I think Garcia. Some days, I think Campbell. Some days, I just can’t think. I know that Campbell is a world-level talent with terrific craft and plenty of guts. With Garcia – despite the power, speed and timing he’s displayed – we haven’t seen what he can do against a top guy at 135 pounds. Either he’s as good as advertised or he’s not, but Campbell is just the type of guy to smoke him out if he’s not authentic. My pick is solely based on a hunch. No result would surprise me.”

“A very intriguing fight to kick off 2021. For a while I doubted Garcia, I thought he was a frontrunner and a bit of a media creation. However, since moving to work with Eddy Reynoso, he has stepped his game up considerably scoring eye-catching knockouts. Campbell is an Olympic gold medalist and a very solid professional, tall and rangy who is a problem for just about anyone at lightweight. However, he has fallen short on the biggest nights against Jorge Linares and Vasiliy Lomachenko. I think he will again fall short this time, too. Garcia can match Campbell for size, is more athletic, a much bigger puncher and has youth on his side. I think this will play out a little like his stablemate Canelo Alvarez’s recent win over Callum Smith. I think Campbell is awkward enough to go rounds. He’ll have to be on guard and that will see his punch output diminish. Garcia may get at Campbell and score a knockdown or two along the way to winning a wide unanimous decision.”

“It’s been a while since Garcia has faced a southpaw – he stopped Noe Raygoza in eight rounds in December 2017 – but that was a much different version of Garcia than the one we’ve seen since he joined forces with Eddy Reynoso. Since then, he’s found that balance of passion and precision that Reynoso has achieved with Saul Alvarez, and while Campbell’s savvy, experience and lefty stance will present a puzzle to Garcia – and because both will be coming off long layoffs – it will take some time for the parties to adjust to one another. The guess here is that Garcia, who is 11 years younger, is armed with supreme confidence as well as faster and more powerful fists, will become the first man to stop Campbell, and, by winning the WBC’s ‘interim’ belt at 135, set the stage for a ‘unification’ showdown of young stars with ‘full’ WBC titlist Devin Haney.”

“King Ryan’s confidence level is at a ludicrous level. And on fight night, we will see why. He will drop and stop Luke in stunning fashion. The KO will come before the end of Round 5.”

“One of my top criteria for selecting a winner in any matchup is speed, and in this case, Ryan Garcia enjoys advantages in speed of hand, foot, reflex, and maybe thought? Added to that are small height and reach advantages, as well as Luke Campbell having to make the journey from England to Texas. All the intangibles line up for Garcia, but Campbell can call on having competed against two elite world champions (Lomachenko and Linares) and his southpaw stance may give him some early openings. Still, Garcia bosses the fight starting in the third round and makes Campbell look every bit of 33-years-old before forcing the referee to stop the fight around the seventh stanza.”

“I expect a statement-making performance from King Ry. He has the right mix of youthful exuberance, size, confidence and fast-twitch explosiveness to stop Campbell. Give me Ryan Garcia by late stoppage, after some scary moments in the early rounds.”

“The components for stardom are there. Garcia has good looks, hand speed, power and a social-media following big enough to be a city. Only the proof is missing. Enter Luke Campbell, an Olympic gold medalist with a solid skillset that has been tested by the best. He went 12 rounds with Vasiliy Lomachenko, a unanimous-decision loss in August 2019. Campbell, who also lost a split decision to Jorge Linares, knows what he’s doing, which might mean he knows how to beat Garcia. Garcia has never gone beyond 10 rounds. But the question is how to deal with Garcia’s hand speed and power, a lethal combination that has propelled him to successive first-round KOs in his last two bouts. Campbell figures to win if he takes the bout into the late rounds, which Garcia never experienced. But it won’t go there. Garcia’s speed and power will surprise, then stun, and finally stop Campbell in the seventh.”

“This could be seen as a crossroads fight for Campbell, after having lost to Linares and Lomachenko. It would be hard to see where Campbell would go from here, should he lose again, this time to the young fresh star, Garcia, who is fast becoming the pin-up boy for boxing. Success breeds success. Garcia, a stablemate of Canelo Alvarez, the pound-for-pound boss, makes me lean toward Garcia. His speed, youthfulness and will to win should see him come away via a majority decision.”

“The boxing industry wants to sell us Ryan Garcia as the future star of the sport and maybe he is, but something is certain: We will have a lot of response after his duel with Luke Campbell, who is a solid boxer with lots of experience. I see Garcia winning a complicated and difficult fight. Garcia by split decision or majority decision.”

“This is an interesting crossroads fight and a step-up for Garcia. But coming off the beat down from Lomachenko, a 16-month layoff and fighting in an arena in the U.S. with a heavily pro-Garcia crowd, I don’t believe the circumstances will favor Campbell in any way. I think that Garcia may be too young and too fast for Campbell. But Campbell has a big edge in experience and he’s never been stopped. So, I’m picking Garcia to win via decision.”

“I think this is a great crossroads fight for Garcia. Campbell is no easy fight for him, but I think Loma really took a lot out of Campbell, and Campbell being off so long isn’t going to help him. Also, Campbell’s other two loses are split decisions, which shows me he finds a way not to win. I think Garcia’s speed and power is going to win this fight pretty easy for him. Garcia by TKO 10.”

“This is a tough fight to call. On balance, Luke Campbell shouldn’t be a 5/2 underdog given his form with Linares, his skill set, toughness and that he sizes up well against Garcia. But the kid does look special. It’s a rare thing to produce one-punch kayos off the back foot. He’s still raw, slightly long, loose with his punches and perhaps beatable now rather than tomorrow. Campbell looks the bet, but history may well prove that call quite ridiculous. Campbell decision win.”

“Ryan is fast, Campbell is the slower fighter, it’s going to be competitive in the early rounds. After the third round, once Ryan figures him out, he’ll time him and possibly stop him after the sixth.”

“Ryan Garcia’s brash, cocky and confident. I’ve seen Luke Campbell fight and he’s a hard man as you say over across the pond. I think Garcia wins in a very hard-fought decision.”

“This is the first real test for Garcia. He’s an explosive, quick-handed fighter with power and has an accurate counter left hook. Both are rangy fighters. I see a chess match, with both fighters being smart and using their skills. Campbell crafty southpaw who has been rounds. He needs to take Garcia into the back half of the fight and test him. I see Garcia by close decision.”

“Interesting fight. I believe that it will be a coming-out party for Ryan Garcia. Luke Campbell has the experience and has been in with very good opposition. He was able to recuperate against Jorge Linares and be competitive the rest of the fight. With that being said, I think that Ryan Garcia will catch him early and stop him within three rounds. That’s if Ryan Garcia is supposed to be the face of boxing, which I think he’ll be. He’s got it all, so far, talent, charisma, punching power and is a very likable guy. Kinda like Oscar De La Hoya was when he was coming up. Ryan Garcia by KO within three rounds.”

“This is a great matchup. Campbell has more experience both as an amateur and a pro. He lost twice already for lightweight world titles. He has a total of three losses on his record, two by split decision. The other was a wide points loss to Lomachenko and although he got dropped in each loss, he still finished the fights. This is his opportunity to try and get the world title in his third attempt. Campbell needs to keep his hands high as Garcia likes to throw quick straight rights and hard long left hooks. Garcia is facing his biggest test and will also need to keep his hands high. Campbell is a good hard puncher throwing long straight rights and he works the body well with both hands. If there’s a knockout, I think it could come from Garcia, but I do see the fight going long and might be a close decision win or stoppage late for Ryan Garcia. But this is a fight either guy can win.”