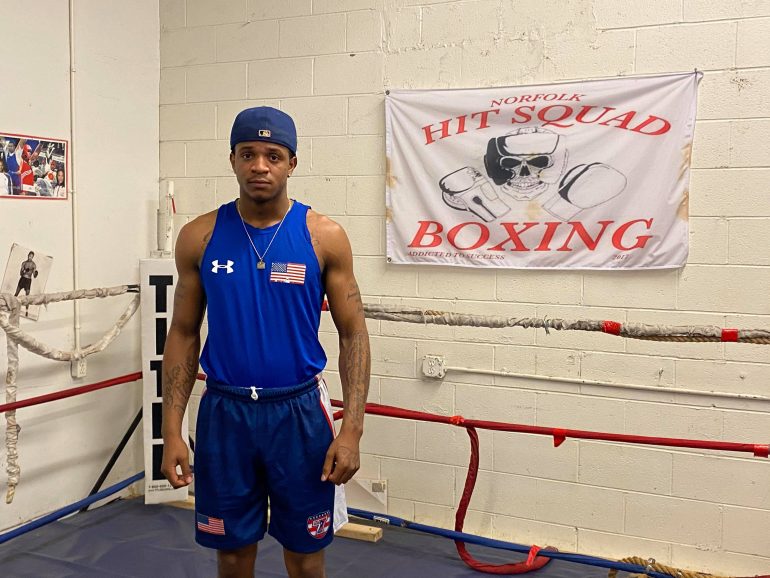 NORFOLK, Virginia – It was the afternoon before Christmas but there was plenty of stirring at the Norfolk Hit Squad Boxing Club. Typically, there’d be about a dozen or so boxers popping the punching bags and skipping rope in the single ring warehouse near the Virginia waterfront.

But on this day, only Nicholas Sullivan, the undefeated lightweight prospect, and his trainer Shaun Wilson, were in the building. Holidays in the gym are nothing new. The two share a birthday, and will skip the cake to put in rounds on the punch mitts instead.

“If I say Nick let’s get in the gym, he’ll come,” said Wilson, who has trained the 22-year-old Sullivan since he was nine. “He’s motivated.”

Sullivan (2-0, 1 knockout) signed with Golden Boy Promotions and turned pro in August of 2019 after an amateur career of over 120 bouts, which included the 2014 USA Junior National Championships title, and a runner-up finish in the 2018 National Golden Gloves. Sullivan fought once more in October of that year, but hasn’t fought since then.

Feeling festive, Sullivan said he had just one wish from Boxing Santa.

“I’m doing all of this for no fight date so I always look at the positive, I always look back at my last fight and saying if I stop now, my next fight won’t look like this. So if I stop now they’ll probably give me a fight so I motivate myself.”

There’s talk of fighting again in February, but training without a fight date coming up can be difficult, Sullivan says. But he learned the importance of remaining discipline from the city’s greatest boxer, the late Pernell Whitaker, who Sullivan met when he was ten years old. Sullivan’s mom used to do Whitaker’s ex-wife’s hair at her beauty salon, Exotic Glamour.

Whitaker became a mentor to him, telling him “You’re next” after watching one of his amateur bouts. The former four-division champion served both as an inspiration for what someone from the same area could achieve in the ring, and as a cautionary tale for what happens when you lose focus.

“Coming from this area you had no choice but to like Sweet Pea Whitaker. He was just motivation because nobody really makes it from Norfolk,” said Sullivan.

“[Whitaker] taught me a lot. To train hard, in and outside of the ring because yes he was motivation, but you could also look at him as motivation in, as he got older he taught kids not to do what he did outside the ring.” 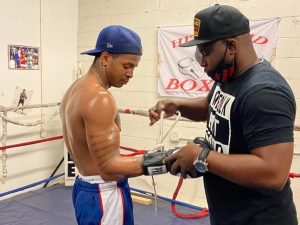 Long before fighting on DAZN cards, his mom’s beauty salon was the site of many of his early fights. Sullivan admits he had an anger problem and would fight neighborhood kids out back, which upset his mother. One day, Gloria Peek, who was one of the coaches for the 2012 U.S. Olympic boxing team, offered to allow him to train at her gym. His mother liked the idea.

“She actually said, ‘I’m gonna put you somewhere someone can actually beat you up,’” remembers Sullivan.

Is that how it went once the gloves were on?

“Yeah it’s boxing, you’re not gonna win them all. But I’ll tell you what. I did get beat up but everybody that beat me up, I definitely got them back,” said Sullivan.

Wilson says that Sullivan’s jab is his strongest asset as a boxer. He says he’s confident that Sullivan will be able to excel at the next level because of how well he has done in sparring with world champions like Shakur Stevenson and Rau’Shee Warren, as well as top amateurs like Keyshawn Davis (a Norfolk native Sullivan grew up with) and Bruce Carrington.

“Within the next 5 years, Norfolk will be like Washington D.C. was as far as world champions,” said Wilson.

Sullivan says it’s an honor to share the ring with talent of that level, but he doesn’t get starstruck.

“When I get in the ring with top athletes like that, I picture myself like, this is where I’m supposed to be because I’m a top athlete as well,” said Sullivan.