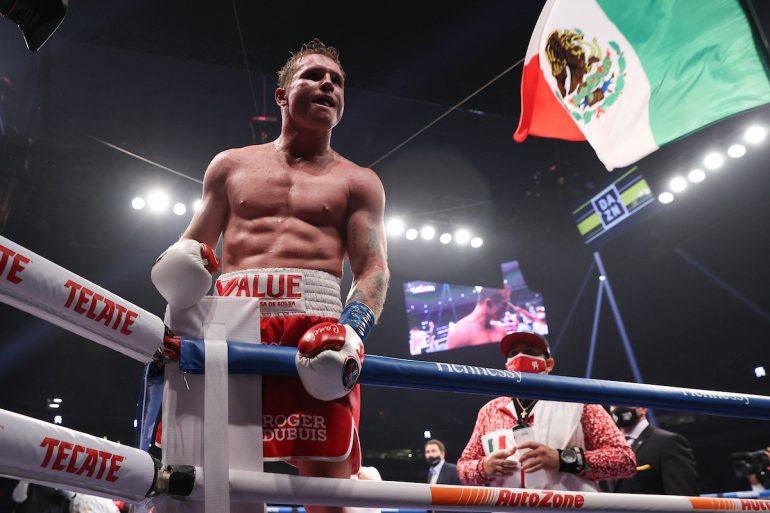 Welcome to the final Ring Ratings Update of 2020.

Only one major bout remains before the end of the year – four-division beltholder Kazuto Ioka’s WBO 115-pound title defense against three-division threat Kosei Tanaka on New Year’s Eve – and the elite Japanese showdown between The Ring’s No. 3-rated junior bantamweight and the magazine’s No. 1-rated flyweight (himself a three-division beltholder) is currently driving boxing hipsters nuts with anticipation.

(Give yourself 25 “hipster points” if you’re mad that The Ring didn’t hold its Fight of the Year award until after Ioka-Tanaka; and give yourself 100 points if you plan to loudly proclaim on Twitter that the winner should be Fighter of the Year.)

However, the stars of the sport’s glamor divisions – Terence Crawford, Errol Spence, Anthony Joshua, Gennadiy Golovkin and Canelo Alvarez – fought in the final two months of 2020, more than enough to merit a rankings update on RingTV.com before the close of this challenging and tumultuous year. 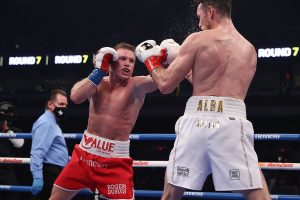 Alvarez, the reigning Ring Magazine middleweight champion, scored the most significant victory in the past 60 days by adding the Ring Magazine super middleweight title to his ever-growing belt collection with his one-sided unanimous decision over previously unbeaten Callum Smith on December 19.

The other standouts were dominant as well, but their victories did not result in any changes withing the rankings.

Crawford, the No. 2-rated welterweight, defended his WBO title with an impressive stoppage of former beltholder Kell Brook, reminding fans why he’s considered one of the three best boxers in the world, pound for pound. However, Brook, who was unrated at welterweight and junior middleweight (where he’d campaigned since being stopped by No. 1-rated welterweight Errol Spence), was not a notable-enough opponent for Crawford, No. 3 the Ring’s pound-for-pound rankings, to advance past No. 2-rated Naoya Inoue.

Apart from the elite standouts, many top-10 rated fighters were in action, including junior bantamweight contenders Joshua Franco and Andrew Moloney (whose anticipated rematch ended in a controversial No Decision after two rounds), No. 5-rated heavyweight Luis Ortiz, No. 2-rated lightweight Devin Haney, No. 2-rated cruiserweight Illunga Makabu, No. 5-rated super middleweight Billy Joe Saunders, and No. 6-rated flyweight Junto Nakatani, who won the vacant WBO title and advanced one spot in the rankings by stopping No. 9-rated Giemel Magramo in eight rounds.

Read on for all the updates to the Ring’s rankings and the comments and debates of the Ratings Panel:

“Canelo Alvarez looked every bit the pound-for-pound king with an absolute masterclass against Callum Smith,” said panelist Anson Wainwright. “This win separates him from the guys behind him.”

The rest of the Panel concurred, including members who previously thought the Mexican star was unworthy of the lofty position.

“I’ll admit, I didn’t agree with Canelo at No. 1 at first, but he truly solidified that position, at least for now,” said panelist Michael Montero.

“Gotta admit I thought Callum was going to give Canelo more problems than he did,” said panelist Martin Mulcahey. “In past I said I thought GGG beat Canelo, but credit where due with Canelo continuing to fight the best available opponents while others have not. I do not think it is Crawford’s fault, but he has not secured the great fights that Canelo has. So, I will take the official verdict of the GGG fight and say Canelo is No. 1 now over Crawford.”

Wainwright suggested bringing in Usyk to replace Pulev. Many panelists agreed with this suggestion, but a few lobbied for Joe Joyce.

“For me, Usyk underperformed against a 36-year-old Chisora, and Joyce pretty much came of age against (Daniel) Dubois, who was viewed unanimously as the heir-apparent,” said Associate Editor Tom Gray. “I’m a massive Usyk fan, but if we’re going on heavyweight resume (and FORGETTING the cruiserweight run) Joyce trumps Usyk.”

Panelist Adam Abramowitz agreed: “If it’s Joyce vs. Usyk at this point, I’d take Joyce based on resume at heavyweight.”

Light heavyweight – Anthony Yarde drops out of the rankings following a split decision loss to Lyndon Arthur who replaces him at No. 10.

Wainwright suggested that Gilberto Ramirez enter the rankings at No. 10 following his 10th-round stoppage of Alfonso Lopez. None of the other panelists were feeling that suggestion.

Super middleweight – Alvarez is new champion. Smith drops to No. 3. Saunders remains at No. 5 after scoring a wide UD over Martin Murry in defense of his WBO title. John Ryder remains at No. 7 after outpointing Mike Guy.

Wainwright suggested Smith dropping to No. 3, which was accepted by all of the panelists, including those who think that might still be a bit high for the former champ.

Middleweight – Golovkin remains at No. 1. Szeremeta drops out of the rankings. Zhanibek Alimkhanuly re-enters at No. 10.

“How long are we going to keep ranking Canelo as champ at 160?” asked Abramowitz. “We agreed to take this back up after his fight (with Smith). Can someone reach out to his team to get clarification on this? I think it’s quite an accomplishment what he’s been able to do; I also don’t want to rank him at 160 if he has no plans to fight there in the future.

Responded Gray: “He was asked at the post-fight presser if he’d ever campaign at cruiserweight. He laughed and said ‘No, it’s too big, my best weights are 160 and 168.’ I’d leave him, there’s no rush. All we’re doing is declaring a title vacant. If a fight comes up that can fill the void, we can look into it again.”

Added panelist Diego Morilla: “As much as I love ranking fighters in only ONE division at a time, keeping Canelo ranked at both 160 and 168 seems OK right now.”

Canelo remains in the middleweight rankings for now. (Cue the #Salty Society to start to whine about this on Twitter and accuse The Ring of Golden Boy bias… oh wait…)

Lightweight – Haney remains at No. 2. Masayoshi Nakatani enters at No. 10 after a ninth-round stoppage of Felix Verdejo.

Bantamweight – Emmanuel Rodriguez remains at No. 4 despite a controversial split decision loss to Reymart Gaballo. 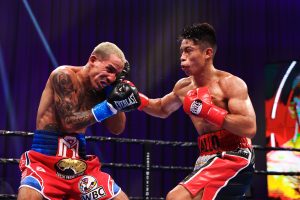 “Emmanuel Rodriguez for all the world looked like a wide points winner over Reymart Gaballo,” said Wainwright. “However, two of the judges inexplicably saw Gaballo the winner. I’m not sure how we quantify this fight in our ratings. I thought Rodriguez would stay where he is and Gaballo would not enter. I guess in light of the ‘official’ decision we could bring in Gaballo but don’t want to drop Rodriguez too much, he won and doesn’t deserve it.

“How about we drop Rodriguez one place and bring Gaballo in at No. 10. It’s a tip of the hat to the ‘loss’ and ‘victory’ but also says Rodriguez won. Feels harsh to drop Rodriguez, I’m really not sure what the right thing is here. The result left me dumbfounded.”

Commented Montero: “What happened to Don Trella? He used to be one of the more reliable judges in boxing, but he’s had some bad cards as of late. Rodriguez clearly beat Gaballo. Competitive fight, but Rodriguez was the clear winner. I’m good with bringing Gaballo in at No. 10 but agree that Rodriguez should keep his position at No. 4.

Added Abramowitz: “I would not bring Gaballo into the rankings. I had Rodriguez winning 9-3. Easily one of the worst robberies of the year.”

Concurred Mulcahey: “Watched replay of Rodriguez-Gaballo fight… and man, is ‘robbery clause’ an apt description for what needs to happen here. I’m not sure how we quantify this fight in our ratings. Don’t want to see Gaballo enter off this performance for sure, he needs a legitimate rematch win at the very least.”

“Andrew Moloney looked for all the world to have landed a clean shot that shut Joshua Franco’s eye. After 30 mins the commission rendered the fight a second round non-contest. Very harsh on Moloney. In light of the result things to stay as they are. However, due to the highly controversial nature I would not be against Moloney moving up one place sitting right behind Franco in our rankings. Hopefully we get the rubber match.”

Gray, Abramowitz and Morilla were in favor of keeping both junior bantamweights where they are.

“Tough luck for Moloney but moving him anywhere on a ‘non-win’ or even a flagrant injustice like this one is not great either,” said Morilla. “That was the lowest point of the year, by far. Wouldn’t have happened if Joe Cortez had been manning the video replay operation. I hope he recovers and comes back to his desk before the NSAC destroys another poor guy’s record.”

Mulcahey disagreed with the majority.

“This is tough, but I am for moving Andrew Moloney up one spot at minimum,” he said, “but I think we should apply common sense where NSAC did not. Moloney’s eye popping punch was legit in my opinion, so moving Moloney up to No. 6 ahead of Franco is my vote. Sometimes our ratings need to reflect the truth (in cases of obvious bad judging and in this case refereeing) instead of proclamation from on high. WTF? Why were they even on the phone when it was supposed to be up to the video replay referee alone to make a decision on validity of headbutt?”

Flyweight – Nakatani advances from No. 6 to No. 5. Magramo drops out. Joselito Velazquez enters at No. 10.

Junior flyweight – Agustin Gauto advances from No. 10 to No. 9 following a first-round stoppage of Juan Jose Jurado. Jesse Rodriguez enters at No. 10 following a second-round KO of Saul Juarez.

Strawweight – Wanheng Menayothin drops from No. 1 to No. 3 following a close unanimous decision loss to Petchmanee CP Freshmart, who enters at No. 2. Melvin Jerusalem remains at No. 10 following a second-round KO of Jayson Francisco.