From Ali to Tyson, Jim Gray reflects on decades of talking to GOATS 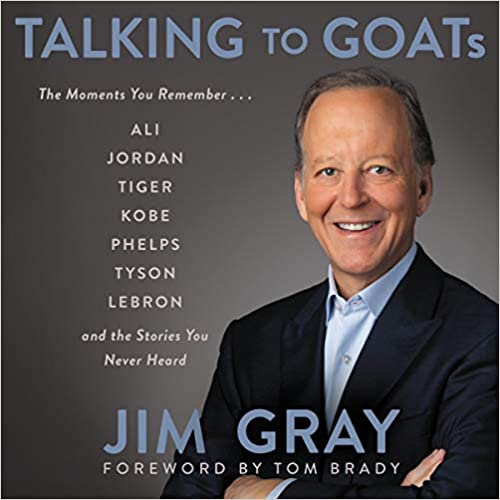 With 43 years under his belt and a reputation as one of the greats of sportscasting, complete with the 12 Emmy awards and a spot in the International Boxing Hall of Fame to prove it, Jim Gray has had a career unlike any other.

But if he was like most people, he might have chucked the whole thing aside after his first interview, assuming that it wouldn’t get any better than talking to Muhammad Ali in 1978 as an 18-year-old intern turned video tape editor in Denver, Colorado.

“It did just the opposite,” laughed Gray. “It was like I started to get thirsty and wanted to do that again. I thought, ‘Wow, that was really cool; let’s see if I can do that again.’ It drove me to wanting more.” 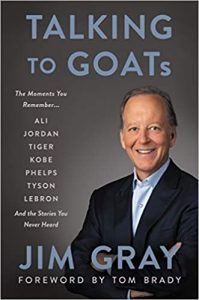 He got more, more than he ever expected or that anyone could dream of. From ringside at the biggest fights in the world and courtside for the NBA to on the field for the NFL and Major League Baseball and practically every sport in between, Gray has seen it all, and he’s chronicled his career in a new book, “Talking to GOATS”.

Focusing on not just his career, but his relationships with superstars such as Ali, Mike Tyson, Floyd Mayweather Jr., Tom Brady, Tiger Woods, Kobe Bryant, LeBron James and Michael Jordan, just to name a few, Gray’s book, co-authored with Sports Illustrated’s Greg Bishop, is a fast and compelling read that should leave you with one thought when it’s all over:

“It’s been fun to look back and it’s kind of interesting because you don’t realize how much has gone on until you start putting it all together,” said Gray, 61. “Greg Bishop, who wrote the book with me, did a fantastic job. The guy was just incredible and I’m really grateful to him and I can’t believe how he put this all together. We’re talking about tens of thousands of events and interviews, and all kinds of stuff. It’s 43 years. It’s gone really quickly and there’s been one spectacular experience after another that’s added up to this collection. I pinch myself all the time. I know I’ve had great fortune and a lot of people have helped me along the way. So I don’t take it for granted. But I also know there’s been hard work and dedication that helped to make it happen.”

Just reading about the non-stop travel from venue to venue from season to season can leave you wondering when Gray sleeps. When The Ring caught up to him on November 24, it was the morning after Monday Night Football and two days away from more NFL work on Thanksgiving. Add in the media obligations to promote the book and calling Gray one of the hardest working men in the business isn’t a stretch.

But being on the frontlines of the biggest sports events in the world didn’t come overnight. Gray had his days of sitting in the auxiliary press section at fights, but he wasn’t discouraged.

“When I would sit way up there, I was not only happy to be there, but I kept thinking, ‘One day I’m gonna be down where those other guys are,’” he said. “If I dedicate myself to this and if I can take the rejection and withstand all the trials and tribulations that you have to go through and do it with a smile and an attitude of understanding, I knew that this is where I’m at right now, but this isn’t where I’m going to be all my life. I couldn’t even tell if a punch was being thrown, but I was there. And that’s how it started. I wasn’t watching it on TV; I made it into the arena.” 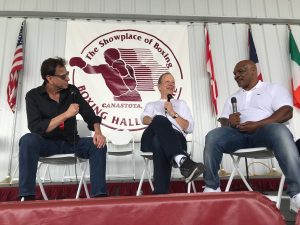 The Ali interviews led to working with Bob Arum on Top Rank broadcasts, then Don King on DKP shows. In recent years, Gray has been a staple on Showtime’s boxing shows, and he even worked the recent Mike Tyson-Roy Jones Jr. exhibition. All along, he’s developed a reputation for being a no holds barred reporter who is not afraid to ask the tough questions. Sometimes this has led to some awkward exchanges, but the funny thing is, despite sometimes contentious interviews with the likes of “Iron Mike,” the two have a long-standing friendship. The same goes for Gray’s relationships with the likes of Brady and the late Bryant, all of whom received queries that dug deep at times.

“It was because I had to,” Gray said of asking the questions many wouldn’t. “I had to satisfy my natural curiosity, I had to for the people I work with and for, and I had to for the audience. All of those people, basically in all instances, understand that. They know you have to. And they have a choice. Nobody has to do the interview. There is no requirement or real obligation. Sometimes it is standard fare if the rights holder is asking for an interview that the participant does something, but they don’t have to do the interview, particularly if they know that they’ve done something that calls into question their performance or something that calls into question what they’ve done outside of the ring or off the field or off the court. It’s now in the public domain. So I think they respected the fact that they know I have to do my job. It’s never with any mean spirit, ill will or malicious intent. It’s just trying to attain the information as to what has just occurred and why it occurred and how it occurred. I don’t think it’s affected any real relationship that I’ve had with anybody because they all understood that and knew what was coming once they agreed to do the interview.”

And looking back at some of those interviews, which are plastered all over YouTube and are covered honestly in the book, the biggest compliment you can pay Gray is that he was fair. That’s always been his bottom line.

“I’ve tried to be objective and fair,” he agrees. “That’s how I tried to conduct myself in all ways, with everybody.”

It shows in his work, and the more you dig into that work, not just in boxing, but everywhere, it’s like watching a master class in how to interview someone. Gray quickly deflects such praise, instead looking to put the focus on the broadcast pros he’s teamed up with. 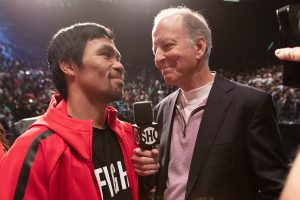 “If you’re a good reporter and you do your job, you fit in with the telecast,” he said. “I fit in with Steve Albert and Gus (Johnson) and Al Bernstein and Mauro (Ranallo) or Bob Costas and Marv Albert, Bill Walton, whoever I happen to be with. If I’m bad, I’m gonna stick out like a sore thumb. So you don’t want to do that. You want to be able to be up to the level of the professionalism of the rest of the team.”

A lot of his craft also came from those early days in Denver.

“I was a videotape editor when I started and that was a really great exercise for me to be able to edit other people, to see where they were going well and where they were making mistakes,” Gray said. “And then I would correct the mistakes as an editor. I could edit out what didn’t fit into the story. I learned to be an editor, so when I started doing my questions myself, I had been in that booth and seen what was good and what was bad.”

As soon as his workday was done, he would turn on the television in the studio and see that it was only just beginning as he watched Ted Koppel and Johnny Carson duel on late night television.

“It taught me, not only being in that edit booth what was good and what was bad, but it also taught me how to listen. And if you could listen and interpret the information and then react, there was something to that that you might be able to work in this profession and have a decent career.”

He’s had more than a decent career, and while he’s respected in all the sports he’s covered, he’s meant perhaps more to boxing, where he is a hall of famer, than any other. So in turning the tables, the question for a man used to dishing them out is, what has boxing meant to him.

“I love boxing,” Gray said. “I love the people in boxing. I love the experiences I’ve had in boxing. Boxing gave me my start. So I’m always going to have a very soft spot in my heart for the entire sport and the people who participate in it on all levels. Boxing opened a lot of doors for me and helped me establish myself. I’m very grateful to the sport and very, very fond of and attracted to the people who are in the sport.

“Boxers go in there by themselves, so they give you the most honest answers,” he continues. “They’re not hiding. There is no organization, there is no coach, they can’t blame their teammates, so they’re accountable and responsible for themselves. That doesn’t mean they always behave right; it doesn’t mean the sport doesn’t have a whole lot of quirks and flaws and gets in its own way a lot. But at the base of it, there’s a lot of great people I’ve been able to observe and see their triumphs and their tragedies. It’s been spectacular.”