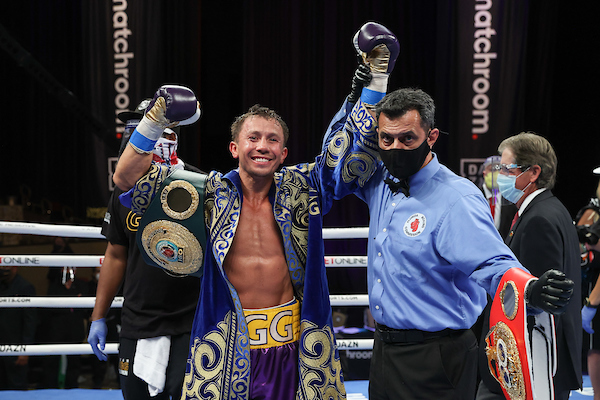 The shadow lurks. It’s been out there for a few years now, with its reddish hue and reluctance to step anywhere near him.

Gennadiy Golovkin knows. The IBF/IBO middleweight titlist gives the perfunctory smile for the cameras and says the right things for the digital mics. Though, deep down, it gnaws at him. It has to.

Over their last three fights, Golovkin and his nemesis, Canelo Alvarez, continue to circle each other like growling dogs divided by a chainlinked fence, each fighting at least a month apart from each other. Call it design, call it coincidence. Call it anything you want, the two seem inexorably linked.

This time, however, it was a day apart.

So, excuse the 38-year-old GGG for looking like Adonis in his title defense of the IBF/IBO belts against overmatched 31-year-old Polish challenger Kamil Szeremeta Friday night on the DAZN from the Hard Rock Hotel & Casino in Hollywood, Florida.

With Alvarez fighting Saturday night, Golovkin sent a fistic missive to the world’s No. 1 pound-for-pound fighter with an emphatic seven-round beat down of Szeremeta in an outcome that was never in doubt as soon as the contracts were signed.

Golovkin (41-1-1, 36 knockouts) made history with the 21st successful defense of the middleweight title, surpassing the former mark previously held by Hall of Famer Bernard Hopkins.

“I told you I would come back after the Canelo fight, I’m still smart and I needed time,” Golovkin said. “Not a big surprise (with his accuracy). I feel very comfortable. I had a lot of time. I felt my jab. I felt my power. I respect Kamil’s trainer and I respect Kamil’s corner, but he was done, come on guys.”

As for who he would like to fight next, GGG played it safe. He did not want to evoke Canelo’s name prior to the fight. Afterward, Golovkin still seemed reluctant.

“I’m open for anybody (next), the best for business, for the DAZN, for me,” Golovkin said.

Coming off a career-high 440-day layoff, GGG looked in the best shape of his career, outlanding Szeremeta 228 to 59.

Golovkin started patiently. He poked Szeremeta (21-1, 5 KOs) with the jab and with less than a minute in the opening round he tagged the Polish fighter with an overhand right.

Then, Golovkin unfurled a left hook on the jaw that dropped Szeremeta with less than 10 seconds in the round. Golovkin set it up with a right uppercut, with a wide right to the body.

In the second, Golovkin once again had Szeremeta shaking with a straight right. Szeremeta was dropped a second time with a chopping right to Szeremeta’s left ear. 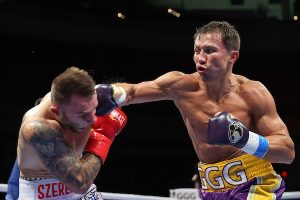 Szeremeta knew he was in way over his head.

Between the second and third rounds, Golovkin’s new trainer, Jonathan Banks, told his charge that Szeremeta was in survivor mode.

Working well behind the jab, Golovkin kept up his attack. With :28 left in the third, Golovkin landed a right to the body, but Szeremeta did break his ignominious knockdown streak by staying on his feet for once throughout a round.

Inside the first minute of the fifth, Golovkin buried a couple of left hooks to the body. Szeremeta, to his credit, showed great resilience. He took a battering and kept trying.

By then, this was nothing more than a spirited sparring session.

With just under 2:00 left in the seventh, Golovkin felled Szeremeta a fourth time with a left jab. Szeremeta’s face was a swollen mess.

Assimenios saw enough after the seventh and very wisely ended it. 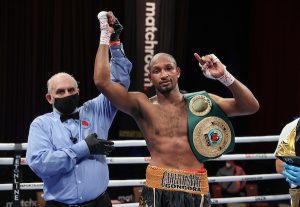 Gongora was down all three scorecards when he dropped Akhmedov twice with a pair of left uppercuts in the final round, forcing referee Frank Gentile to wave it over. 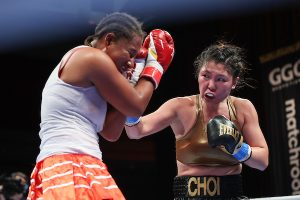 Akhmedov had Gongora in some trouble in the second round. He bounced a right off of Gongora’s head early in the round. That appeared to stun Gongora, who was forced to hold Akhmedov. Another Akhmedov right hand caught Gongora’s attention, but he survived.