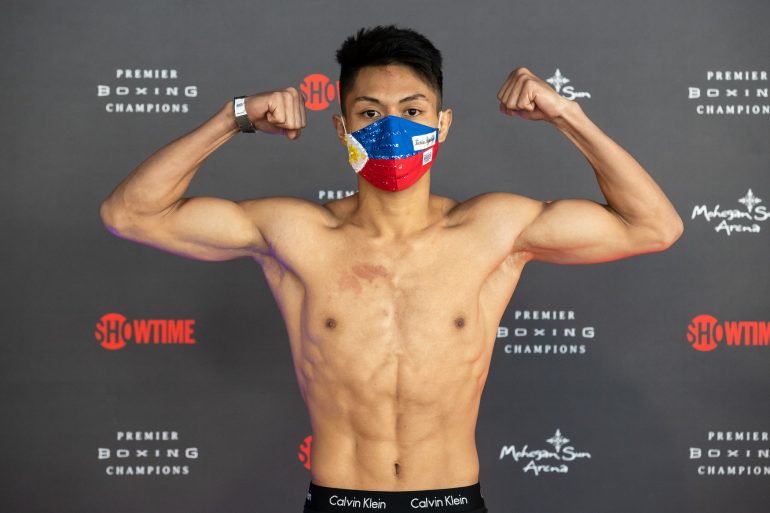 All photos by Amanda Westcott/SHOWTIME
18
Dec
by Ryan Songalia

These are just three of the ways that Reymart Gaballo’s name has been misspelled since he was announced as the replacement opponent for Emmanuel Rodriguez in the headliner of this Saturday’s Showtime Championship Boxing card at the Mohegan Sun Casino in Uncasville, Conn.

American audiences have had a short time to become acquainted with the unbeaten but unknown Filipino bantamweight after it was announced a week ago that Nonito Donaire Jr. had tested positive for the coronavirus (he has since posted a negative result he says proves it was a false positive) and was removed from the card.

If Gaballo has it his way, his is a style that makes his name easy to remember. The 24-year-old is the hardest-hitting right hand puncher from the Philippines since Luisito Espinosa emerged several decades ago, and brings a level of aggression that underlines his love for knockout victories.

(RELATED: Reymart Gaballo is a Filipino banger to get excited about)

The switch from original opponent Jose Velasquez to the former IBF bantamweight titleholder Emmanuel Rodriguez seems like an abrupt step up in competition, but Rodriguez has been on his radar for awhile.

“Before [my management] said already that maybe I’ll fight Rodriguez, after that  they said [Juan Carlos] Payano and then Velasquez, and now it goes to Rodriguez,” said Gaballo (23-0, 20 knockouts), who is co-promoted by Sanman Promotions and MP Promotions. 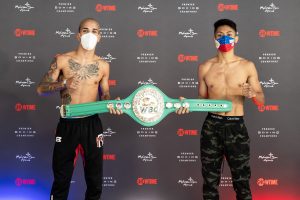 When the possibility of moving up to the main event popped up, Gaballo didn’t hesitate to accept.

“They mentioned some names already but whatever opponent they give to me, I don’t have a problem with that,” said Gaballo, who trains with Osmiri “Moro” Fernandez in Miami. “I train every day, excited to fight in the ring again.”

Both Gaballo and Rodriguez weighed the same on Friday, checking in at 117.6 pounds.

Gaballo was born and raised in Polomolok, just 20 minutes north of General Santos City, the hometown of Manny Pacquiao. His father is a truck driver and his mother worked at a plant that processes pineapples for Dole Food Company. He has one younger brother, Albert, who was an amateur boxer as well.

His grandfather taught him how to box by hanging a sack of sand from the ceiling for a punching bag. By age 14, he relocated to the Sanman Gym in General Santos. Jim Claude Manangquil, President of Sanman Promotions, said he began to take notice after his older brother, John Ray Manangquil, took an interest in Gaballo.

“He was knocking everybody out in the fights and knocking bigger guys out in  sparring with 16 ounce gloves,” said Jim Claude Manangquil of Gaballo.

Despite having only around 30 amateur fights, Gaballo has found other ways to obtain experience. He has made trips to Japan as a sparring partner for world champions Naoya Inoue and Shinsuke Yamanaka, at the Sanman Gym with Marlon Tapales, and with Guillermo Rigondeaux in Miami. He says Inoue is the best he’s sparred with, crediting his movement, speed and power.

Rodriguez too has been in the ring with Inoue, losing his IBF bantamweight title by second round knockout in his last fight, in May of 2019. Prior to that, Rodriguez had won the belt with a unanimous decision win over Paul Butler in the United Kingdom, and made a successful defense of it against Jason Moloney before running into Inoue.

Rodriguez, 28, of Vega Baja, Puerto Rico says the change in style isn’t too drastic, and that the biggest difference is the youth of Gaballo and experience of Donaire.

“Gaballo tends to open up a little bit more than Nonito does, so it’s easier to connect on him,” Rodriguez said in a fight week press session. “He is probably a little more aggressive than Nonito and his defense isn’t as good. I think Nonito would have been a tougher fight than Gaballo but I am not taking this fight lightly.”

Gaballo’s biggest strength is his prodigious punching power, an asset that Gaballo is shy to the point of embarrassment about.

“Every time I fight I am only focused on my opponent and thinking that we are gonna finish the round, but I landed clear punches so that’s it,” he said with a laugh.

Asked about whose styles he’d been in the ring with that reminded him of Rodriguez, Gaballo points to his sparring with Filipino prospect Criztian Pitt Laurente, and his 2018 win over the previously unbeaten Stephon Young, who took him the 12-round distance for the first and only time. Gaballo has since scored four straight knockout wins.

Already Gaballo is getting a taste of the trappings of success, flying in from his training base in Florida to Connecticut on Wednesday aboard a private plane, after commercial flights had been canceled due to the snow storm that hit the northeast.

Gaballo’s co-promoter Manny Pacquiao had to endure his name being butchered early on in his American conquest before becoming a household name that rolls off the tongue.

Now Gaballo gets the chance to make sure American fans never forget his name.