With new promotion, Gilberto Ramirez already has his eye on the future 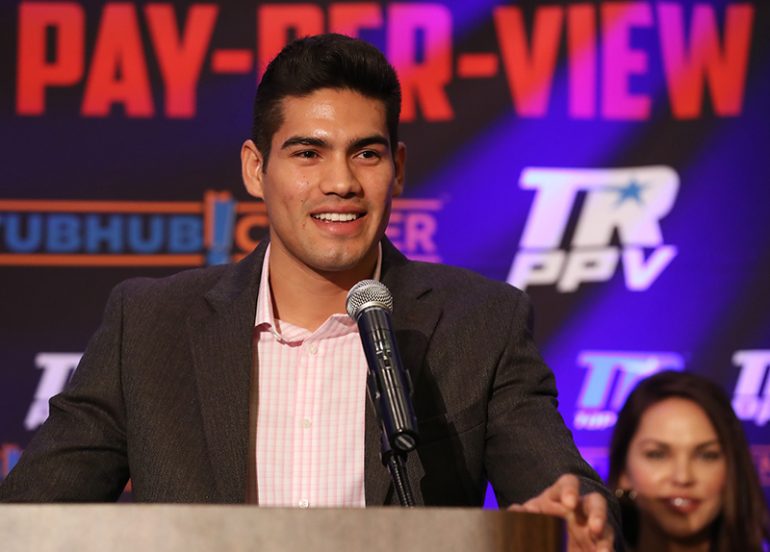 During a hiatus that lasted over a year and a half, Gilberto Ramirez one day found a new purpose: Assisting young, unbeaten fighters by signing them to a promotional deal.

Zurdo Promotions was born, but his goal of returning to the ring was still up in the air until he finally secured a fight.

World titleholders and contenders over the last 5-10 years, including the likes of Floyd Mayweather, Manny Pacquiao, Canelo Alvarez, and Miguel Cotto, have started promotional companies and continued fighting. Friday’s ‘Battle of the Rio Grande’ card will be unique as both Ramirez and Lopez will be fighting and co-promoting the card.

Lopez (32-3, 25 knockouts) has already established himself in and around his hometown of Huntsville, Texas, promoting club show over the last couple of years, often fighting on them as well. In his last bout on November 16 of last year, the 38-year-old Lopez defeated gatekeeper Denis Grachev by unanimous decision.

Ramirez has not fought since stopping Tommy Karpency after round 4 on April 12 of last year. The fight marked his first at 175 pounds after successfully defending his WBO super middleweight title five times.

The 29-year-old Ramirez (40-0, 26 KOs), who resides in Mazatlan, Mexico, entered into a stalemate with Top Rank afterwards that lasted several months. In July, Top Rank notified Ramirez of his release from his promotional contract, thus becoming a free agent.

After finalizing a fight a few months later, and moving forward with his plans to promote, Ramirez was glad to just make his return to the ring. It was also easier than expected landing a fight with another promoter.

“It’s easy since we are promoters of the fight,” Ramirez told The Ring in a recent interview. “It’s also interesting because this will be the first time I will be fighting as a promoter. I was looking for fights for the boxers that I promote as well. We came into contact, had several discussions, and came into an agreement.

“Lopez is aggressive. It will be an interesting fight. I’m intelligent  I like to fight my fight. He moves forward. I like to utilize distance inside the ring. The fans will be very interested in the fight because I’m not taking him or the fight lightly because he has won his last eight fights. He holds a regional title belt that I want. I believe he will bring the best out of me. I’ve been training well. I’m not taking Alfonso lightly. He’s a good boxer. He’s fought the best. I want to face the best as well. I have to pass the test. I’m preparing for the best in the division.”

Ramirez, who is managed by David Suh, was elevated to mandatory challenger for the WBO world title at 175 pounds, which is part of the bylaws in the sanctioning body. Because of the long layoff from the ring, the WBO dropped Ramirez to No. 8 in their rankings.

The Ring removed Ramirez from their rankings.

Ramirez grew frustrated with each passing week of inactivity. During his time away from boxing, Ramirez was able to spend time with family, including a newborn daughter, but he did come up with the idea of promoting himself and young fighters from the Mazatlan area.

“At the beginning, I was frustrated,” said Ramirez, who began his pro career in August 2009. “I thought I was wasting my career by not fighting. I even wondered if I was retired. Things happened because I was patient. Then, the Coronavirus (pandemic) came. Everything in the world stopped. Not just me. The good thing about (the pandemic) was that I was able to spend time with my family, my baby. It was a positive experience for me because I took a step away from boxing. I was always training in the gym, always staying in shape. Then I would think ‘what do I want?’ Then came the idea of a promotional company, the fight (on Friday), and everything went forward.”

Ramirez is eyeing a world title run in 2021, should he defeat Lopez. There are several attractive fights against any of the world titleholders in the division.

While he is open to fighting any of them, there is one fighter whom he most wants to fight.

“I’m ready to fight for a world title,” said Ramirez. “After this fight (Friday), I will be looking for a world title fight. That’s why I’m fighting Alfonso Lopez. He’s my measuring stick. I know there are fighters who want to take my unbeaten streak. I’ve been preparing myself the best I can. I know this fight is very important for him as well because he’s towards the end of his career.

“I’m willing to fight any of the world titleholders. If I had a preference, I would want to fight (WBA titleholder Dmitry) Bivol because he is the most complete in the division. I think the fans would think that would be an intriguing fight but my focus right now is on Alfonso Lopez. I can’t wait to return to the ring because I want to feel the energy from the crowd. There will be 50 percent capacity for the fight. That is what motivates me.”

Ramirez would like to win and eventually unify the division. He sees himself remaining in the sport for a long time after he hangs up his gloves for good.

While he intends to promote fights as much as possible, whether in Mexico or in the United States, Ramirez wants to be an example for the young fighters he signs, giving them a platform where they can display their talent.

“I would like to keep working as a promoter. I would like to keep signing young talent to the company. Overall, I want to help fighters who want to reach their goals, become champions, and would want to become a promoter in boxing after they are done fighting. Not just fight. I thought that way as well. I thought what will happen after I retire. I want to remain in the sport for a long time and I didn’t know how and then I realized I can promote. I can’t fight forever and I want to help young fighters. That’s the goal of Zurdo Promotions.

“I’ve signed 10 young fighters to my company. They all want to be ‘Zurdo’ Ramirez. They’re young and talented and want to become world champions. I want them to be motivated and have that hunger. When the fighters see me, I want them to see that I was just like them. That’s why I push them and I want them to stay motivated. Our goal is to help and guide young fighters. We want them to reach their goals. I would like to see them reach their goals as a promoter and a fighter. Wherever they want to go in boxing, I would like to help them. They can use me as an example. I’ve been there with promoters and managers in the sport.”