Canelo Alvarez says fighting the best, not money, is what motivates him 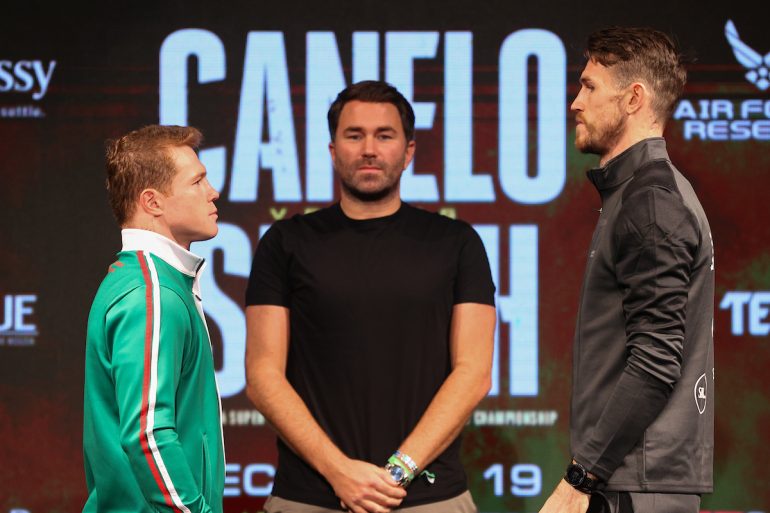 Through all of the turmoil this year, Canelo Alvarez remained focused on his goal of making sure he got into the ring, and that when he did he would be facing a top-quality opponent.

It was not an easy road to get there to be sure, but in the end, Alvarez accomplished his goal – no small feat in a world racked by a coronavirus pandemic that has made making significant fights very difficult.

But Alvarez, boxing’s biggest star and the pound-for-pound No.1 fighter in the world to many, will step into the ring to challenge unbeaten Callum Smith for his Ring magazine super middleweight championship on Saturday (DAZN or PPV, 8 p.m. ET) at the Alamodome in San Antonio, where a socially distanced crowd of about 11,000 will be permitted to attend.

It is exactly the kind of fight Alvarez has consistently pursued throughout his career since arriving at the championship level in 2011. Since then he has faced a who’s who of notable opponents, including Floyd Mayweather (who handed him his lone defeat), Miguel Cotto, Gennadiy Golovkin (twice), Daniel Jacobs, Shane Mosley, Austin Trout, Erislandy Lara and Sergey Kovalev.

So, when it came time to secure his next opponent, Smith was one of his main targets.

“His name was always on the radar,” Alvarez told The Ring. “My goal is to unify all of the titles at this weight.”

Getting the fight done, however, was no easy task.

Flash back to the early part of 2020. Alvarez was a few months removed from a spectacular 11th round knockout of three-time light heavyweight world titlist Sergey Kovalev, having taken his belt 13 months ago. It was the third fight of Alvarez’s landmark five-year, 11-fight, $365 million contract that extended his deal with Golden Boy Promotions and made his fights exclusive to fledgling sports streaming service DAZN. 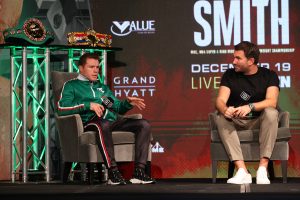 When it came time to line up his fight for May – on Cinco de Mayo weekend – Alvarez vacated the light heavyweight title with an eye on dropping back to super middleweight, where he holds the WBA secondary belt he won by knocking out Rocky Fielding in the third round in December 2018 in the first fight of the now-defunct contract.

In March, a deal was struck for Alvarez to challenge undefeated super middleweight world titlist Billy Joe Saunders. Golovkin was due to fight a mandatory middleweight title defense against Kamil Szeremeta in the spring as well, and if he and Canelo both won it was supposed to pave the way to a third mega fight between the bitter rivals in September.

Then the coronavirus pandemic hit and everything changed. Alvarez-Saunders was about to be announced. The press release was written and due to be blasted out, but when the NBA postponed the remainder of its season in mid-March the announcement of the fight, due to go out the following morning, was delayed. Then it was canceled altogether as the sports world shut down.

As the months ticked by Alvarez wanted to fight but even when DAZN and Golden Boy were ready to begin putting on cards again things were complicated by an inability to sell tickets during a lockdown and by the new economic realities the pandemic inflicted on the two companies.

Alvarez, already with a rocky relationship with Golden Boy in recent years, eventually filed a breach of contract lawsuit against Golden Boy and DAZN in September, seeking $280 million in damages — the rest of the money remaining on his contract.

There were attempts to iron things out, including mediation, but nothing worked and in early November the parties reached a settlement under which Alvarez walked away from the rest of his contract and became a promotional and broadcast free agent.

Later that month, Alvarez agreed to return to DAZN, albeit on a one-fight deal, to face Smith, who is promoted by Matchroom Boxing’s Eddie Hearn, who has an output deal with DAZN.

Alvarez will not receive close to the $35 million he was due under his Golden Boy deal but told The Ring that his free agency was more important to him than every last dollar.

Despite the well-documented issues Alvarez has had with Golden Boy in recent years, even besides the now-settled litigation, he said he holds no grudge toward anyone at Oscar De La Hoya’s company.

“First of all, I am very grateful for all the years, the many years that we did have together,” Alvarez said. “Unfortunately, at the end it just didn’t work. We couldn’t work together and because of that we decided to take our own path. But I am very grateful for the beautiful years and good things we did do in the past. But at the end we couldn’t continue to work together.”

Alvarez, however, did not want to be out of the ring for all of 2020. He insisted that he get a date to fight in December. But with PBC already putting on the Errol Spence Jr.-Danny Garcia pay-per-view on Dec. 5, it was unwilling to do a second one in the same month, especially on such short notice.

PBC, according to a source with knowledge of the discussions, proposed that Alvarez wait until January and defend his secondary 168-pound belt against former super middleweight world titlist Anthony Dirrell with Plant defending his title in the co-feature. If Alvarez and Plant both won they would meet on pay-per-view in May. 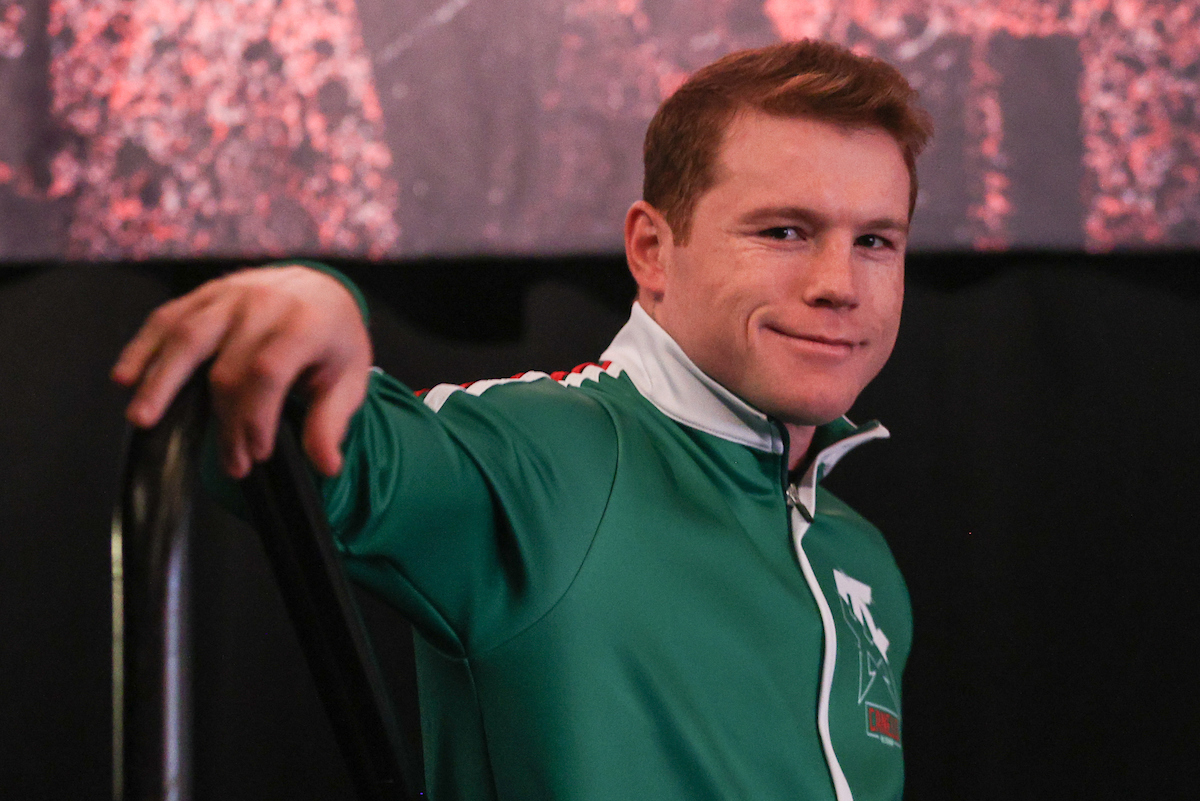 Rather than redoing the deal with Saunders, who is also with Hearn, or making one with Plant, Alvarez (53-1-2, 36 knockouts), 30, of Mexico, wound up with a deal to face Smith (27-0, 19 KOs), 30, of England, the most highly regarded fighter in the super middleweight division. He knocked out George Groves to win the WBA title in the final of the World Boxing Super Series in September 2018 and has made two defenses.

“We’ve basically had him in our sights since we went up to 168 pounds,” Eddy Reynoso, Alvarez’s manager and trainer, said. “That’s when names started to come up like Callum Smith, Billy Joe Saunders, (David) Benavidez and Caleb Plant. They’re the best fighters in the division. I think the best in the division is Callum Smith. That’s why we decided to fight him. So, he’s been on our radar for over a year. I really didn’t think we’d get to fight him in December but the fight was made and we’re ready.”

The 6-foot-3 Smith has an obvious size advantage over the 5-8 Alvarez and there’s also a built-in revenge storyline to the fight because Alvarez knocked out Liam Smith, Callum’s older brother, to win the WBO junior middleweight title in 2016.

“Obviously, he is a tall fighter and has many abilities and, obviously, we are ready for him,” said Alvarez, who has won belts in four weight classes. “We have a lot of experience. I’ve seen many of his fights. We are ready to fight with him. He is a very experienced fighter. He is explosive, explosive punches, so that makes him a dangerous opponent. He’s very strong and sturdy and he’s No. 1 in his division, so that motivates me, gives me motivation to train right and take him on.”

Reynoso gave his blessing to the match, echoing Alvarez’s desire that he face the best opponents possible.

“When you have the best boxer in the world, you have to show it by fighting the best opponents,” Reynoso said. “It’s not easy to get where people call you the best fighter in the world. You have to pass many obstacles. You have to win fights, you have to win titles. We’ve always liked challenges. That’s how Canelo is where he is today. Now that we’re in that position we’re just going to keep working hard and doing things even better. And, of course, we’ll keep looking for the best opponents and the best fights to stay in that position.

“More than anything, (Smith is) a good fighter. He’s a fighter who’s taken on good opposition. He’s a fighter who knows how to fight at a distance, who’s strong. He’s a boxer with a great left hand, who’s taller than Canelo. We have an excellent fighter in front of us. I think this fight is a risk, like many of them are, but going up against these kinds of fighters is what we motivates us to keep working harder and improving.”

Win or lose against Smith, Alvarez said his plan will be to continue to regularly face the best opposition he can.

“I want to unify the titles. I am here to work. I am here to make all these fights happen so people can enjoy all them,” Alvarez said. “I like to make history. I like to fight the best. I like to take risks. That motivates me. I’ve done it my entire life and I will continue to do it.”