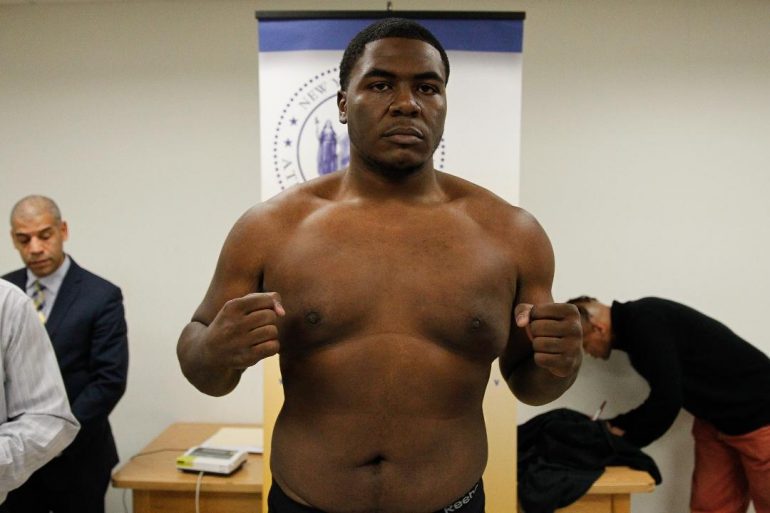 Stephan Shaw is aiming at big things in the heavyweight division (Photo courtesy of DiBella Entertainment).
16
Dec
by Joseph Santoliquito

The piled up brown cardboard boxes served as a passage to a clearing in the small, dimly lit basement. There, Stephan Shaw used to find nirvana, a VCR hooked up to a small box TV sitting on a beaten wooden table.

Next to it was a massive tape collection of some of the greatest fights and fighters of the 1980s.

Shaw popped one tape in after another and would watch for hours. His parents never really had to look for him for dinner. They knew he was “down there watching those tapes” in his grandfather’s basement, entranced by Sugar Ray Leonard, Marvin Hagler and Mike Tyson.

That’s where it started. It’s where boxing became an appendage to Shaw, like a hand, or a finger.

Shaw is a 28-year-old undefeated heavyweight who is a “heavyweight boxing historian,” whose grandfather is Winston “Buddy” Shaw, a renowned amateur trainer from St. Louis, Missouri, and his father is Brian Shaw, an amateur star in the 1980s.

The 6-foot-5, 237-pound Shaw (13-0, 10 knockouts) will be carrying a lot of family history with him when he takes on 24-year-old Ukrainian Lyubomyr Pinchuk (12-1-1, 7 KOs) in an eight-round co-feature Thursday night on NBC Sports Channel from Freddie Roach’s fabled Wild Card Boxing Gym in Los Angeles.

“I was raised around it, and I remember watching a ton of tapes in my grandfather’s basement and just fell in love with boxing” Stephan recalled. “I did a ton of research on boxing. I used to watch HBO boxing, and the pre-fight build-up for all of the major fights. My grandfather used to post pictures in his gym from KO Magazine and Ring.

“I loved the way the gloves smelled, and how the boxing shoes looked. I was totally mesmerized by everything about the sport. I would pop those tapes in and I was sitting there for hours.”

Stephan had a distinguished amateur career, and winning was his motivation. After he won the national Silver Gloves in 2003, and in 2006 won the Ringside National title, Shaw stopped boxing for five years.

“At the time, I didn’t think I had a life, boxing was taking me over and I didn’t know if I liked it anymore,” Shaw recalled. “My dad was really hard on me. I went to the Olympic Trails in 2011 and saw all of the guys I came up, and that’s when I decided to come back.”

“I feel like this is my coming-out party on Thursday night,” Shaw said.

Esteemed amateur coach Basheer Abdullah is Shaw’s trainer. Bashir was drawn to Shaw’s athleticism, and says Shaw reminds him of the committed Buster Douglas with his hand speed and footwork. Bashir grew up with Shaw’s parents and he loves how much Stephan is entrenched in boxing.

“Stephan goes way back and is a student of the sport and knows more than I do,” Bashir said. “I saw an older film of him when he was nine years old, and he has that same passion. It makes my job really easy.

“As long as he stays humble with his commitment and knowledge, because you don’t want to bump heads with a fighter filled with knowledge. That’s not a problem with Stephan.

“What you’re going to see from Stephan is someone who will showcase his talent, with power in both hands, and show American fans that he’s someone people better think about. If I were a fan, I would be thinking Stephan Shaw is going to be the next American heavyweight champion of the world.”