Callum Smith unfazed by Canelo challenge: I’m a winner, and I don’t take fights for a payday 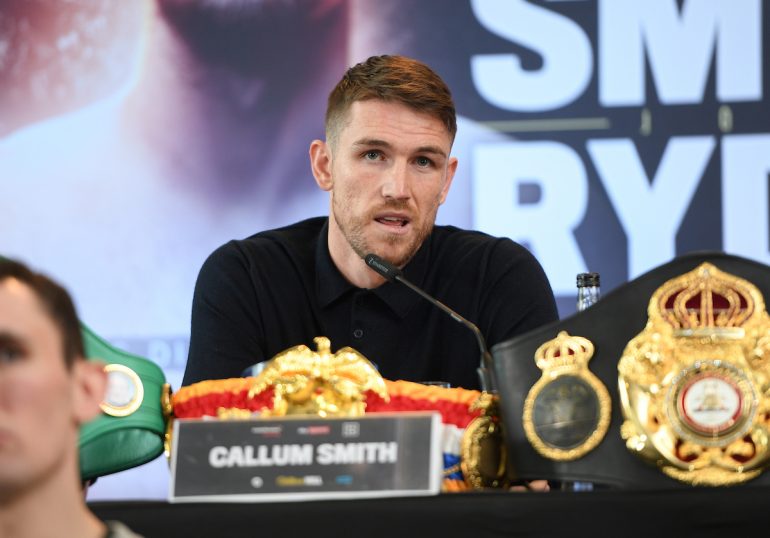 The reigning Ring Magazine super middleweight champion and WBA titleholder, Callum Smith, has pursued boxing megastar Canelo Alvarez with the unyielding determination of a sniffer dog. More than once, the 30-year old boxer-puncher from Liverpool, England has lost the scent, but he is now closing in on the target and the pair will finally face off on Saturday at the Alamodome in San Antonio, Texas.

Earlier in 2020, Smith was one of two possible opponents for a May showdown with the pound-for-pound No. 1, but he lost out to countryman and fellow unbeaten titleholder Billy Joe Saunders. However, when COVID-19 reared its ugly head, the Canelo-Saunders fight fell apart and opportunity came knocking once again. Both Canelo and Smith ticked over in training, the former split from long-time promoter Golden Boy Promotions, and after months of political punch and counter punch, the fight was signed and sealed.

Now that it’s here, how’s the timing for the defending champion?

“It’s a weird one,” said Smith (27-0, 19 knockouts) after a moment’s deliberation. “Four weeks’ notice for the biggest fight possible isn’t ideal. However, given the times that we’re in, I kind of expected to get it at late notice. And I wasn’t sitting around doing nothing. I’ve been in the gym. If you look at social media, I have been training, and while it’s not been specifically for Canelo Alvarez, I have been training none the less. We got the four weeks, and it was just a case of securing sparring for Canelo.

“If I’d been sitting around doing nothing and got four weeks’ notice, then I would have passed on it. I’m the champion and as long as I have those belts, I’m in a position to land the biggest fights possible, and I would still have been in a position to secure the Canelo fight. I would have seen the year out and tried to get it next year. I’ve taken this fight because I believe that I’m ready and I’m in good shape. I believe that I’ll be able to go in there and do what I do. I’m good enough to win the fight, I’m a winner, and I don’t take fights for a payday. I’m here to win, and if you’d seen me training over the last few weeks you’d know that I’m not just here to make up the numbers.” 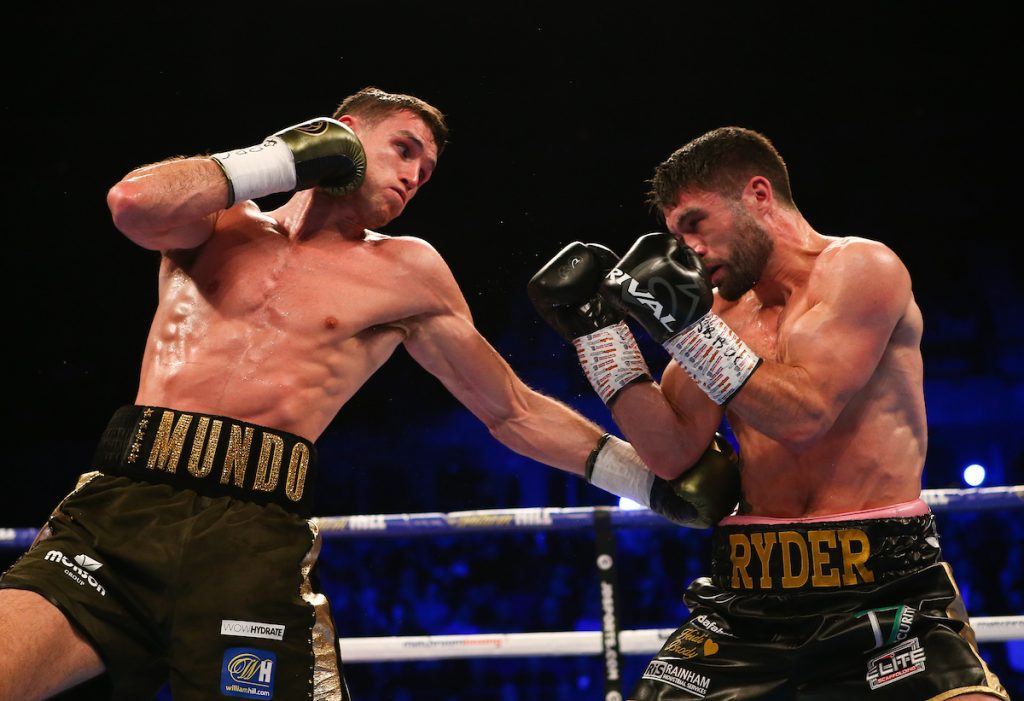 A large percentage of fans and media are completely dismissing Smith’s chances of overcoming Canelo due to a very poor showing against southpaw compatriot John Ryder in November 2019. The champion labored through that fight, never looked himself at any point, and many at ringside felt that Ryder should have displaced him as champion.

“I’ve been a boxer long enough to know what to expect, and I’ve been here before,” said Smith before providing evidence. “I was under par against Nieky Holzken (UD 12) and went from being the favorite to win the World Boxing Super Series to being the underdog against George Groves in the final. But I knew what I was a capable of, I knew that a better version of me would show up for the final, and it’s the same thing again.

“If the version of me that turned up for John Ryder turns up against Canelo, then I lose, there’s no doubt about that. I know that better than anyone. I know the best version of me needs to turn up, and throughout my career, when I’ve been up against it and needed a big performance, I’ve always delivered. To judge me off one fight is a bit naïve, and if some fans feel that’s the best of me, then they probably haven’t watched the rest of my career. Some fans are brilliant, some fans are fickle and will judge you off of one performance. If I beat Canelo, the next thing will be that Canelo wasn’t quite as good as we thought. We seen it recently with [Vasiliy] Lomachenko losing to [Teofimo] Lopez. Suddenly, the aura is gone from Lomachenko and people are saying, ‘He wasn’t really that good, was he?’ It’s madness, he was my No. 1 pound-for-pound, but some fans are just quick to write you off.”

And what of Canelo’s form? The 30-year-old powerhouse from Guadalajara, Mexico, is coming off a spectacular 11th-round knockout of Sergey Kovalev, which saw him claim the WBO light heavyweight title. In truth, however, the brutal finish in that fight masked what was otherwise a very pedestrian performance from Canelo. He was sharp defensively but one-paced with his offense, and a lot of the trademark intensity that he displayed in the lower weight classes was missing.

“He’s altered his style slightly,” offered Smith. “He’s focusses more on the big power shots than the fast combination punching we’ve seen at welterweight and [junior] middleweight. At middleweight we seen a bit of both; he started putting a bit of size on and looked for the big punches. I think his punch output probably went down and you can understand that, especially at light heavy, where he’s carrying that extra weight. I think 168 suits him more than 175 did.

“But if you look at his last 10 fights, he’s shown a bit of everything: he can box off the backfoot, he’s elusive, he’s got good head moment, he can tuck up, move forward and let the big power punches go. I’ve just got to expect all different versions of him. I’ve got to get in there and see what version turns up for me and adjust. I believe that I’m a good enough fighter to adjust when I’m in there. I’ve proved I’m good enough to be world champion, I’ve proved I’m at this level, and you’ve got to be able to adapt. I can’t just go in with Plan A and bank on him having Plan A, then he changes and I can’t adjust. I’m not too worried about what version of him turns up. I’ve watched him for years now, and I’ve always believed that the best version of me beats him.” 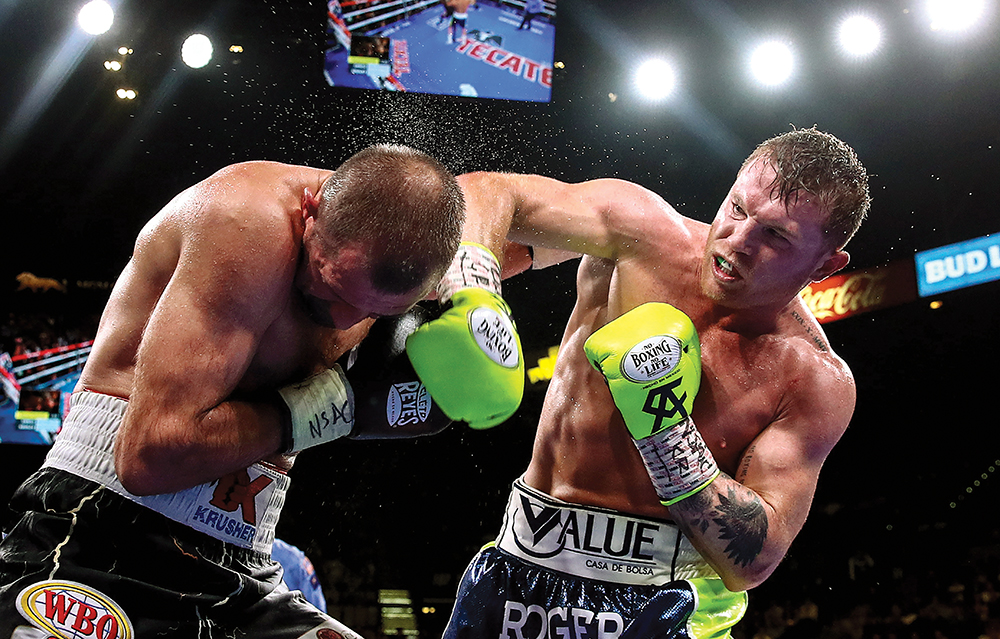 Canelo (53-1-2, 36 KOs) has been in against three fighters above the middleweight limit: Julio Cesar Chavez Jr. (UD 12), Rocky Fielding (TKO 3) and the aforementioned Kovalev. Given that he started his career as a 15-year-old junior welterweight, we have to give the Mexican warrior maximum respect for his multi-weight success.

Smith, however, views himself as a completely different proposition.

“No disrespect to anyone, Rocky Fielding had the size, but I don’t think he has the ability I’ve got,” said Smith, who scored a first-round stoppage of Fielding in November 2015. “Kovalev had size and ability, but he was at the tail-end of his career. He faded, his age and lifestyle probably caught up with him, and he was just off a very tough fight with [Anthony] Yarde. There are always little reasons why it could have been smart matchmaking.

Canelo-Smith, plus undercard action, will be streamed live by DAZN in the U.S. and in the U.K.