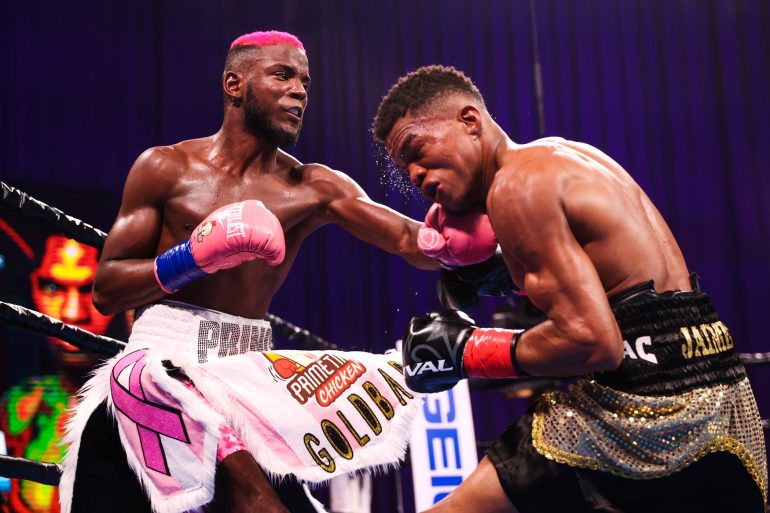 There’s no denying Chris Colbert is colorful—in more ways than one. Despite his pink hair, pink gloves, and feathered trunks, the Brooklyn, New York, junior lightweight can come at you with an orthodox stance or as a southpaw. He’s here, and then there. Colbert, the stylist, can also appear as if he has eight arms, with an array of punches that can come from crazy angles.

Though the “Primetime” that showed up in the featured fight of the PBC Showtime tripleheader from the Mohegan Sun Casino in Uncasville, Connecticut, on Saturday was a brave, new version. Colbert stood in the pocket against heavy-handed Jaime Arboleda and it was Primetime that delivered an exciting stoppage at 1:37 of the 11th round in defense of the “interim” WBA junior lightweight title.

Arboleda (16-2, 13 KOs) was knocked down three times, twice in the 11th. Referee Steve Willis saw enough and waved it over after the third knockdown and Colbert pounding Arboleda.

From the outset, Colbert established his jab. From a righty stance, he splashed Arboleda with a six-punch combination, and quickly switched to southpaw. In the second, Colbert was fighting more of Arboleda’s fight. With around :36 left in the second, Colbert snuck in a blunt left uppercut that rocked the Panamanian, sending him back to his corner on unsteady legs. 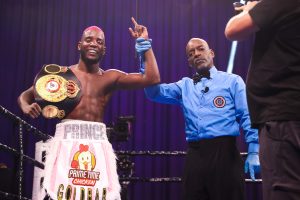 In the fourth, Colbert fought mostly off the ropes. He was clearly the superior fighter, and playing around invited trouble. With :33 left in the fifth, Colbert landed another left uppercut. But there was no doubt Colbert had Arboleda spinning in circles.

“Early on in the fight I hurt my left hand,” Colbert said. “So, I couldn’t really use my jab without hurting myself. I just sucked it up and said that I was going to finish this fight strong. That’s exactly what I did.

“Round nine he landed a lot of shots. I think it’s the most anyone has ever landed on me and I can’t say why I was letting that happen. I could have slipped a lot of them, but it’s boxing. I just made sure that I finished the fight strong.

“Arboleda was definitely a strong young fighter. I hope he keeps his head up and comes back stronger.”

With 1:57 left in the eighth, Willis took a point from Colbert for a low blow.

By the ninth, Colbert just stood there and took Arboleda’s heat. It was as if Colbert was trying to prove he could take a punch. Though he was Colbert who delivered the big blow, a left hook that dropped Arboleda for the fourth time in his career.

As the championship rounds began, Colbert was comfortably ahead, leading to the knockout.

“I wasn’t even catching him that flush with my shots,” Colbert said. “I’m more than just a boxer and a flashy puncher. I can stay in there and bang. I knew there were rounds that were close, and they might have given him. I did what I said.

“I’ve been training since July. I don’t run from anybody. I want to fight the top-5 guys.”

The co-feature highlighted undefeated junior welterweight Richardson Hitchins against former IBF junior lightweight titlist Argenis Mendez, who was coming off a 19-month layoff and was 2-2-2 in his last six fights.

Hitchins was in control from the outset, winning a 10-round junior welterweight, split-decision victory over Mendez by judges Glenn Feldman (99-91) and Steve Weisfeld (98-92), while Don Ackerman (97-93) somehow saw it for Mendez. The judges agreed on only three of the 10 rounds. 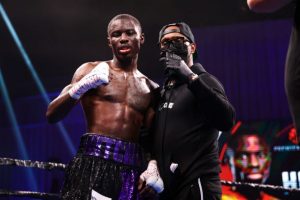 But it was mostly Hitchins on his toes, using his boxing skills to offset Mendez’s heavy shots. Hitchins went to the body, mixing in some right uppercuts, and working well behind a double-jab. Through five, Mendez did not know how to deal with Hitchins, who fired off a consistent jab (57/198 29% to Mendez’ 12/90 13%).

“I rate my performance a B+. I think I might have lost one round,” Hitchins said. “I could have gotten an A if I put a little more hurt on him, but I knew his defense would be tight. I’ve watched him since I was a kid. I knew he was a smart fighter. With the amount of experience I have compared to him, it was a great performance.

“He was a big step up from who I’ve been fighting. He felt disrespected when they sent him my name. He said he was going to use his experience to stop me, but I dominated the fight. I hurt him in the seventh, but he’s crafty and has enough pop so that I couldn’t be careless. I was happy to cruise to the victory and win almost every round.

“This fight went how I wanted it to go. I knew it would get tougher as the rounds went on. I believe that I dominated the fight. I knew he was going to get close and make it rough but I was ready.

“My jab couldn’t miss. I landed good overhand rights and short uppercuts. He was protecting his body very well, so I couldn’t go there like I wanted to. My jab landed every round. He couldn’t take it away from me.”

About the only trouble Hitchins had to deal with was when referee Danny Schiavone scolded him, “Don’t say another word,” with 2:25 left in the ninth for talking back, after Hitchins reminded Schiavone he never said break after a close exchange. 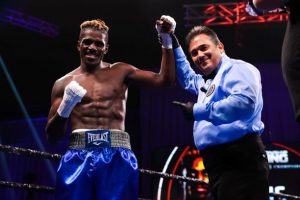 What was supposed to be a scheduled 10-round fight at a contracted 161 pounds became much different when Ronald Ellis (18-1-2, 12 KOs) came in at 166 pounds. Russian southpaw Matt Korobov (28-4-1, 14 KOs) was looking to make a comeback, but again, his body betrayed him.

Korobov could not continue after the fourth round on an injury to his left Achilles. The official time was :01 of the fifth round.

“I know he dies out in the later rounds so I was going to step on it in the second half of the fight. Ellis said. “It’s been a while and I know that this wasn’t my best performance. He’s awkward, he’s a southpaw. I hardly fought lefties and I hate fighting southpaws.

“He wasn’t giving me that much but I was trying to beat him by a few punches each round. I heard the announcers say that I wasn’t throwing as much as I usually do but I was giving what I was getting. After I heard that, I stepped it up. Once I saw that his leg was hurt, I was nervous we were going to the scorecards because he might have grabbed early rounds.

“I can’t say it enough, I did what I had to do and he took the fight. I came here five pounds over and just couldn’t shake them off. I just have to tighten up the diet. I have been hearing from a lot of boxers about it. I promise that will be the last time that ever happens. I want to stay at 160 lbs. My power is there at 160 lbs. I was taking Korobov’s shots well and I just felt like 160 is where I belong, I’ve just got to get my fat ass working.

“He wanted Jermall Charlo, right? Well, I want Charlo then. But I will take anyone. I know that performance was not the best and I probably shouldn’t be calling people out but I am. I am going to be around for a long time and want the big names.”

Last December, Korobov suffered a torn rotator cuff in his left shoulder in the first round facing Chris Eubank Jr. Barclays Center in Brooklyn. Korobov was ahead on the scorecards against Eubank, and again, he was ahead against Ellis, up 40-36 on Ackerman’s scorecard, 39-37 on John McKaie’s and Feldman had it 38-38.

Korobov, who will turn 38 next month, had outlanded Ellis, 22-20, through the first three rounds.