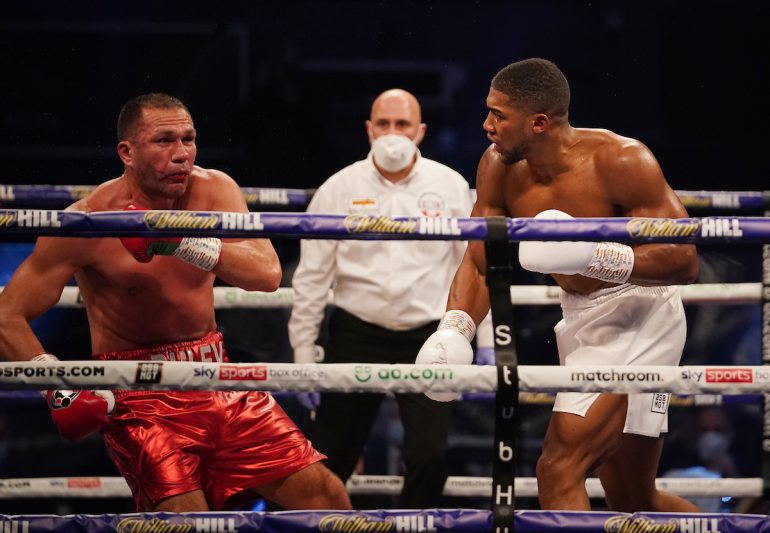 LONDON – Heavyweight championship boxing is back and so are the crowds.

Not only that but the biggest fight that can be made in the sport is still in play after Anthony Joshua defeated IBF mandatory challenger Kubrat Pulev in nine rounds on Saturday to, we hope, set up a mega-fight or two with reigning Ring Magazine champion and WBC titleholder Tyson Fury.

In front of 1,000 raucous fans Anthony Joshua defended his IBF, WBA and WBO titles against Bulgarian Kubrat Pulev, who was rated No. 10 by The Ring going in.

“It’s the only fight to be made in boxing,” said promoter Eddie Hearn of Joshua’s oft-discussed bout with Fury.

Joshua fell short of challenging Fury post-fight, saying he wants whoever has the belts and it’s about a legacy.

“You ask the crowd who they want to see, I’m up for anything,” he said.

The opening session was an extremely cautious affair with both feinting for gaps and only firing off occasional single shots. The crowd was providing a much noisier atmosphere than many thought it would. It felt like a live sporting event with fans, not that only a chosen few had been allowed in to socially-distance. They sang Neil Diamond’s Sweet Caroline and roared every Joshua success.

Joshua, the Ring’s No. 1 behind champion Fury, clubbed away with hooks to start the second and Pulev put his ‘earmuffs’ on and smiled. But the Londoner made him fall short with Pulev’s own lunging left hand.

Friday’s weigh-in might have been a bad-tempered affair with a drawn-out exchange of words but they were showing one another plenty of respect.

Pulev stood in his corner before rounds and the fighters spoke to one another in the round when Joshua held and wouldn’t let the Bulgarian work.

Joshua cracked Pulev with a right that clearly shook the challenger and brought the crowd to its feet. In Round 3, the champion came forward aggressively, hammering away with both hands. Pulev, under heavy fire in his own corner, had to turn his back and South African referee Deon Dwarte picked up a count.

Moments later, and with Joshua flying, Pulev was flat on his back for a second count. Joshua came on strongly but “The Cobra” survived and defiantly battled back after the bell, standing there as if to say, “I’m still here.”

Joshua’s jab was motoring at the start of the fourth but he was clipped by a right that caused him to misstep before he restored order behind his own long, quick left hand.

He stepped in behind a spiteful, jolting jab in the fifth and the crowd applauded his defensive work as he ducked and weaved under a Pulev attack.

The Londoner was on the back foot in Round 6 but he also clipped Pulev with a couple of stern left hooks. The Bulgarian, however, was proving to be terrifically stubborn.

Joshua jabbed at his opponent’s body through the seventh, not only trying to take fuel from Pulev’s reserves but perhaps with a mind to fire that long right over the top.

Again, he appeared to have Pulev unravelling while under pressure but again Pulev bit down, covered up and fought back. Not only that, but he landed a clean right of his own as the session wore on.

Referee Dwarte warned Joshua to keep his fighting clean in the eighth, possibly in reference to too much holding, and Pulev was still very much a threat as he fired off a huge left hook that Joshua ducked beneath which drew ‘Ooooohhs’ from the crowd. 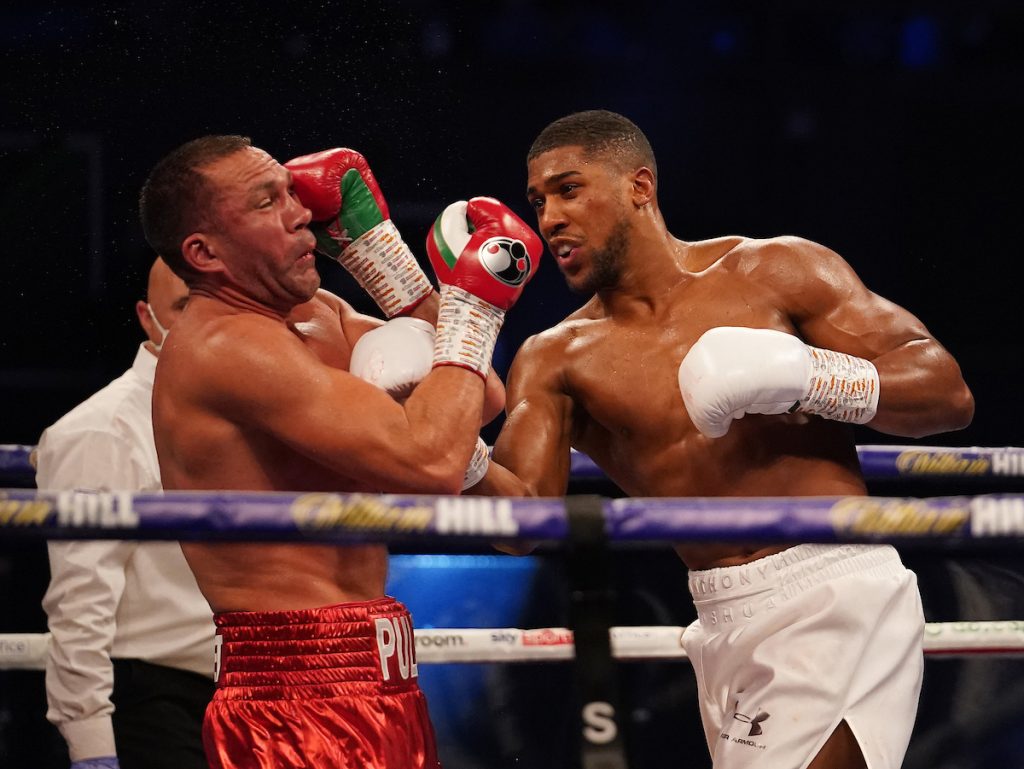 Joshua was winning the ninth with his left hand, sharp jabs and hooks while trying to get his right uppercut working. That was the shot he seemed to be looking for.

Moments later he jabbed to the challenger’s body and Pulev left a gap, through came the uppercut and Joshua piled in with more of the same. Pulev went down for a third time in the fight.

Then, after the count, Pulev clambered back to his feet, referee Dwarte waved them in and Joshua landed one of the best straight right hands of the year to deposit the Bulgarian flat on his back.

Pulev tried gamely to beat the count, which was realistically unnecessary by that point as Joshua had emphatically closed the show.

Pulev, 39 years old and unbeaten in his last eight following the lone loss of his career which came against Wladimir Klitshcko in Germany back in 2014, is a hard man but he was caught by some heavy artillery tonight. He’s now 28-2 (14KOs).

This is still an improving Joshua. He’s moving well, he’s not afraid to win portions of a fight being ugly if he has to, he can entertain and he can box a bit, too. A late-starter to boxing, he could be a couple of years from his peak. He improved to 24-1 (22KOs).

This might not be a Joshua who has necessarily found his own style but it’s one who is collecting all the tools he needs to win big fights.

And fights don’t come any bigger than for the undisputed heavyweight championship of the world. Here’s hoping it’s on tap for 2021.