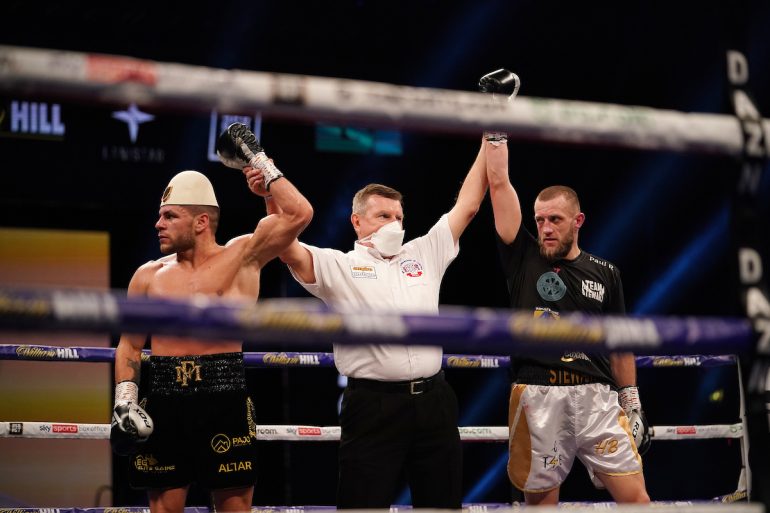 LONDON – Stoke-on-Trent’s Jamie Stewart was the talk of the Anthony Joshua-Kubrat Pulev undercard after he snatched a surprise eight-round draw against touted Florian Marku.

Marku fumed: “Do the judges know boxing or not? I was playing with him. They are ruining my career. How can you give this fight a draw? Of course, he’s a tough guy, he got hit many times in the head, I put him down, he gave me some shots to the gloves, he never hit me clean one time.”

The welterweight prospect, trained by Don Charles, is now 7-0-1 (5 knockouts) and he threw plenty of big hooks early on against Stewart, switching stances and trying to break through.

Marku looked strong and aggressive and Stewart didn’t have the pop in his punches to keep Florian at bay.

A left to the body put game Stewart down in the second but he was up at eight and saw out the round. Marku came out for the next with similar intent although Stewart was hanging tough. Marku made his mark with another hook to the body in the fourth and remained on the front foot but Stewart, now 2-0-1, had some success behind his left as the rounds progressed and Marku’s output dropped.

“He pressured, no doubt about that,” said Stewart. “He caught me with a good body shot, he did the pressuring and I did the boxing.”

Both said they were open to doing it again. I scored it 78-73 for Marku who looked a clear winner.

It took Conway a couple of rounds to settle but once he did he looked a very good operator and won by scores of 100-90 and two cards of 100-89.

McGowan was left with his face a bloody mask after sustaining a cut by his left eye early. Conway was picking his counters, often on the back foot, but McGowan was often making the running and moving forwards, landing some good shots to the body and head as Conway attempted to cover.

Northampton’s Conway started to get a simple but effective one-two going near the end of the fourth round and he carried that on in to the next, also introducing a right uppercut to mix things up.

A weary and severely bloodied McGowan was down early in the eighth and he gamely fought back under-fire but Conway, smooth and classy, was well in control.

The corner could have pulled McGowan out after the eighth as there appeared to be little chance of him turning things around but he resolutely stuck out the last two rounds.

Junior featherweight Qais Ashfaq won the show opener stopping Ashley Lane in the fourth. Lane had taken some punishment in the third and he’d been dropped for a count but he disputed the referee’s compassionate stoppage, although it looked fair.