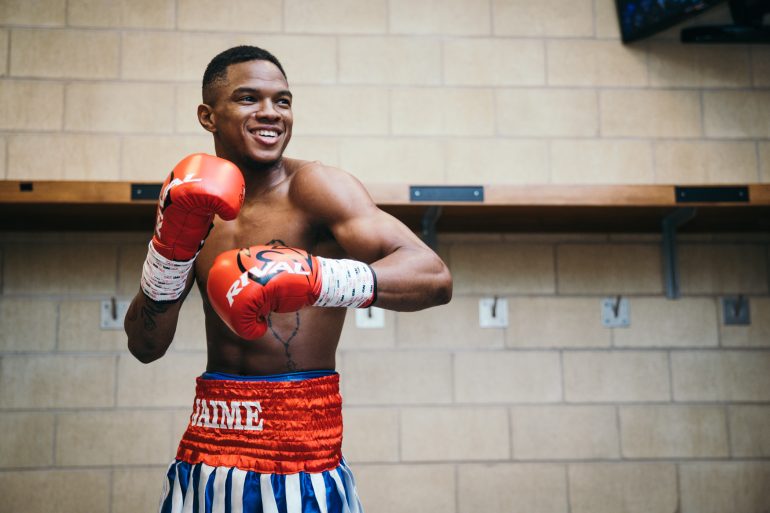 Jaime Arboleda could tell something was wrong. His mother approached him with stiff cheeks and hollow eyes that Thursday morning, August 6, 2009, as he prepared for school. Blinking rapidly to fight back the tears, Jaime’s mother had to sit him down to tell him.

There was an accident; a terrible accident, she let him know gently. It involved Jose, Jaime’s older brother who he idolized.

The family rushed to the local hospital where Jose was taken, and a day later, Friday, August 7 at 27 years old, Jose Arboleda, a promising junior featherweight, was pronounced dead from internal bleeding caused after he was crushed by a bus that fell off a cliff.

The 5-foot-9½ Arboleda (16-1, 13 KOs) carries a six-fight winning streak into the bout and an edge that he has to live up to his brother’s memory.

“I was very affected by my brother’s death,” said Jaime, through his trainer and interpreter, German Caicedo. “Jose was the jokester of the house. He was the one I looked up to; he brought me to tears when he used to tease me as a kid, but I loved him dearly.

“The accident was August 6, and he died the next day. Those are things and dates you never forget. We all went to the hospital, thinking he was going to recover, but he never did. I’ll remember him as a happy, fun, vibrant soul. I fight for Jose. He’s why I took up the sport.”

Every time Jaime prepares to fight, he takes a piece of Jose with him in a family photo on his phone, and a tattoo of a heart on his right shoulder with Jose’s name etched inside and a crown above.

“That’s the way I remember and carry Jose with me,” Jaime said. “But we’re very different in the ring. Jose was a more stylistic boxer, where I’m more a puncher than my brother was. When (Colbert) gets in the ring with me, he’ll be facing two fighters—me and the spirit of my brother.

“I visualize Jose’s words. I can still hear them—but I have to get the job done.”

Jaime said he anticipates Colbert, 24, to use his legs Saturday night, than actually fighting.

“Chris is a very good fighter and a great boxer,” Jaime admitted. “He is in the top of the division as far as his boxing skills. On Saturday night, I am going to test him. I don’t think Chris has been tested like I have. I was tested in my last fight against Jayson Velez and came out victorious. Chris is not as strong as Velez.

“Colbert’s biggest downfall will be his arrogance. He doesn’t have the firepower to finish me with one punch. He’s not a puncher like that. He picks his shots and moves. He’s a boxer and I am a boxer-puncher. We’ll see if Chris is going to be a tough guy and fight, or, as they say, get on his bicycle.

“It’s about doing or dying, and I’m not dying.”

Caicedo says that Jaime’s build and style reminds him of Felix “Tito” Trinidad. Jaime possesses power in both hands, like Julian Jackson, lanky fighters who can punch and work well behind a jab.

“Jaime sets up his power nice and I would say he’s closer to Jackson’s style,” Caicedo stressed. “Jaime is a stalker like Trinidad. He likes to make it a quick night, and he’ll want to make it as fast a night as possible.”

“I didn’t watch film on Arboleda,” Colbert said. “I know he is going to come game and I know his trainer is going to have him in great shape and ready to fight. I am coming to execute my game plan. I am just going to be me – ‘Primetime’ – and this time on primetime TV.

“I feel I am one of the best at 130-pounds, but until I prove that in the ring, I can’t consider myself the best in the division yet. I want to get in there with the top five guys. I know I can beat any champion in this weight class.

Colbert is supposed to be the A-side, though there may not be too much of a difference between the fighters.

Jaime wants to take the belt back to Panama, place it in front of his brother’s tombstone to let Jose know he did everything his big brother said he would do.