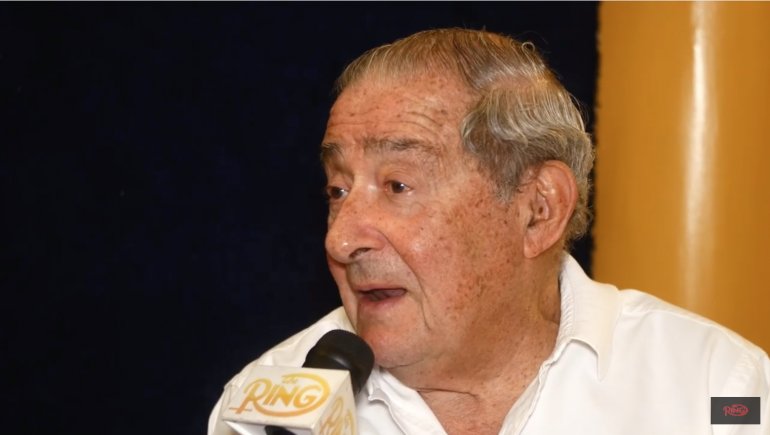 First things first…They didn’t try and put 89 candles on the cake, did they?

No, Bob Arum reported, there were three candles on the birthday cake to top off what he called a “sensational” dinner to celebrate 89 years on this earth.

His son and daughter in law and a grand-son came over to see him in his Beverly Hills residence, there was caviar and a tequila starter, and the lamb chops were top tier.

“I had a little taste of the cake and mostly fruit,” he reported in a Wednesday phone chat.

Full disclosure, I sang a snippet of happy birthday to the man, and, knowing he would probably hate it, handed the phone to my wife, and had her sing a few bars, because the visual of her singing birthday best wishes to The Bobfather had to be more pleasing to the Brooklyn born deal-maker than me doing it.

Then, we talked boxing, after he said damn right, the next one is a biggie.

“We’ve talked about the celebration,” Arum said. “Me and (his wife) Lovee, we talked about it. I had one of my greatest parties for my 70th.”

Governors, senators, lots of bigwigs hit that one…so you could imagine the invite list for the big 9-0, next December eighth.

I couldn’t help it, had to keep it real, I told Arum that hey, here’s hoping 2021 is a smoother ride, that we don’t have to negotiate a freakin’ civil war, which is, disgracefully, the terminology being bandied about by some seditious wretches.

Yeah, I pivoted, and went at a new angle with Arum. 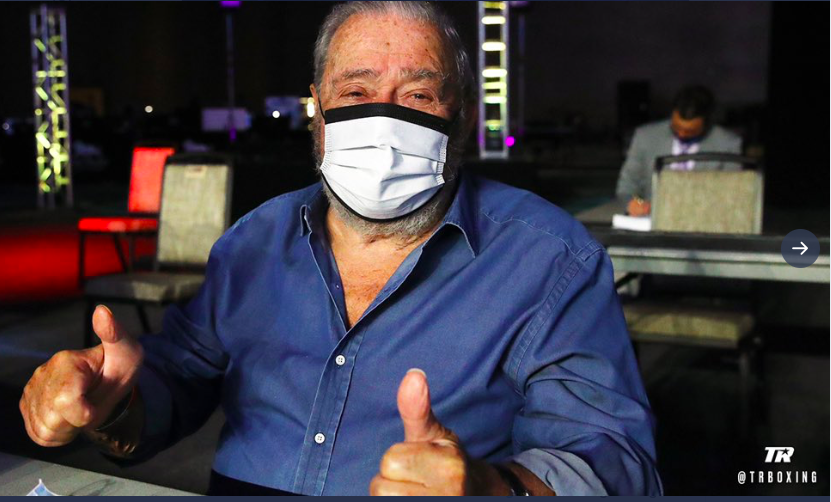 Arum enjoyed his 89th birthday, with a low key b-day dinner in Cali. No, the cake wasn’t a fire hazard, if you were curious. (Mikey Williams photo)

“I think what Trump and his cabal does is, they have embarrassing information on all these guys, Lindsey Graham, Ted Cruz. Graham is being blackmailed…Because otherwise none of it makes sense.”

Like when talking about that Saturday night face-off between Errol Spence and Danny Garcia. Anyone reading this probably watched it, and they saw a stunning, to me, accomplishment. Spence, a little over a year off being in a car crash sent right from hell, and being ejected from his Ferrari onto his face, not only lived, but looked like the self-same pugilist he was before the incident. Danny Garcia did better on my card — I think he won four rounds — than on those of some ninnies who need to take a judging seminar… and all that is to say, the main event was worth my time and energy expended.

But you all know these are different times. Arum has said going back to March-April that the boxing market had changed, because of the effects of COVID, on the world economy. And certainly, within the U.S., with some 11 million or so adults grouped into the long-term-unemployed/out-of-work-and-stopped-looking pen, discretionary spending has to be impacted.

“I heard the satellite and dish number were minuscule,” Arum told me, of the Spence-Garcia production, which was put together and distributed by FOX, in concert with PBC. “Cable really underperformed, way lower than they thought it would do. They were hoping to do 300,000 buys.”

In actuality, Arum heard, by word of mouth, from his sources cultivated from six decades in the game, that maybe 125,000 buys were activated.

The space has been a bit crowded, arguably, what with the Mike Tyson-Roy Jones event being offered on Nov. 28. That one did maybe 1.5M buys, in that range, at $50 a pop. The Spence-Garcia deal went for $75.

You’ll recall that on Oct. 31, that was the price point for the matches offered on a Showtime PPV, topped by the Gervonta Davis-Leo Santa Cruz focus fight.

The chatter about numbers takes up more of peoples’ time than is ideal, I could argue, because outside of a very narrow few, none of us have true dog in the hunt. But, in a way, we do, because we are all fans of the sport, we all want the best fighting the best, and how the market functions (or doesn’t) affects the bouts we get.

Speaking of which; you are probably like me, for the last couple of years, you have been salivating, to a degree or another, at the thought of a welterweight showdown between Terence Crawford, contracted to Top Rank until Oct. 2021, and PBC perennial Spence, the Texas-based talent who after his win over Garcia didn’t sound interested in inter-promotional clash with Bud. Crawford watched the Spence-Garcia fight from inside the Cowboys stadium, and says he is into it. He has also said the very day before that he doesn’t need a fight with Spence, Spence needs a fight with him, so it’s fair to say that from day to day, we aren’t working on a matter that has clearly delineated parts and principals and planning.

On the PBC side of the street, they’ve offered up some reasoning re: Spence v Crawford that makes business sense, I think. I’ve asked PBC rep Tim Smith about that fight a few times.

And the fighters themselves have chatted about the matter.

“They can keep going this route, with Spence, but unless Spence fights Crawford it’s just going to keep costing Al Haymon millions,” Arum continued. “I don’t think he can afford it, not with what he’s getting from FOX. If he wants to keep losing money, he can keep doing it. You make Spence versus Crawford, and you reduce the price, you do it with FOX and ESPN, and it does some business, pretty good business. Everything else, the fans are boycotting. And this boycott will go either way, we can’t do diddley with Crawford on pay per view, but we put him on ESPN, he does really robust numbers. The public is saying we’ll do it, we’ll buy it at a reasonable price. But we’re not gonna buy it if it’s anybody else other than Crawford versus Spence. The boxing fans are stepping up. They can’t compel fighters to fight each other, the only way they can speak loudly enough to be heard is to boycott. It has to be something they perceive to be real special. Spence against Crawford will bring in some of the non boxing fans. But Spence against Thurman will do even less than Spence against Garcia did. They can diddle and squat, and those guys will do nothing. The public has spoken, they’ve said give us a fight we wanna see, but at a reasonable number, not $75 fucking dollars,” Arum continued. “Even with their best PPVs, UFC, they never charge more than $60. UFC is smart. They, unlike boxing promoters who operate by the seat of their pants, have resources to really analyze the market, what the top price should be. Tyson-Jones at $50 was a reasonable price.”